Picking up from my last post, we did leave Black Point and continue north.  But not before getting boarded by the Royal Bahamian Defense Force for a check of our cruising permit.  They were nice guys, but I’m always a little bit nervous during these encounters.  They did ask if we have any weapons and asked several times how many kids we had, possibly having lost count.  Tanya sent them away with Valentine’s cookies hot out of the oven.

We anchored near Pipe Cay around sunset.  Our plan the next day was to make 70 miles to New Providence, where we’d stage for the last 140 miles to Florida.

At bedtime we discovered that one of our cats had been seasick… in the bed.  It wasn’t a pleasant discovery.  After all the water we took down the hatches the other day, we’re running low on clean sheets.

We can only imagine the entertainment we must be providing for the armchair skippers watching our SPOT track.

We left Pipe Cay at sunrise this morning and headed off toward New Providence.  Winds were about 14-18 from the NNE, but a couple sustained gusts to 20 obliged me to put a reef in the main.

An hour or two into what was looking to be a 10 hour day, we lost luff tension in the jib.  Initially I assumed the halyard broke, which really ticked me off because it’s practically brand new, and wasn’t cheap.  No matter, I figured we’d just switch to the spare halyard.  We luffed up and dropped the jib.

The sail came down without any difficulty.  The webbing at the head was still intact.  There was a little damage along the first few inches of luff tape, but it didn’t seem like a big deal.  Still, something didn’t seem right.  It wasn’t until I was getting the spare halyard ready and looked aloft that I realized the top swivel of the roller furler was still at the top of the mast.  So much for going to New Providence today.

We were going to have to send someone up the mast to get that swivel, and we needed sheltered water for that.  So we turned around and headed to Warderick Wells.  Eli did the honors.  The swivel came down without difficulty.  I expected to find a twisty shackle with the pin backed out or possibly broken.  Instead I found a 3/8” stainless bow shackle.  It wasn’t just broken: there was a section missing from the bow. 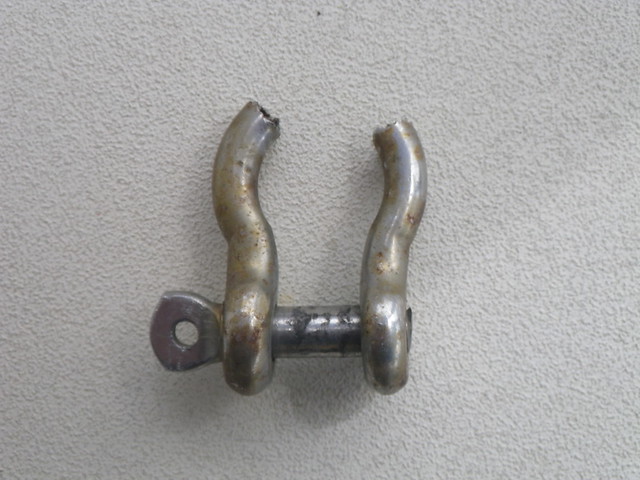 There were no markings on this shackle, but others that size I have onboard are marked 1 TON WLL (working load limit).  I don’t think we put anywhere near a ton of pressure on it, I think it was just a piece of junk and probably failed from crevice corrosion.  I usually throw unmarked shackles away.  I had no idea one was holding up my jib.  Shame on me, but it would have been nice if my rigger had mentioned it.

Tanya didn’t like the looks of the luff tape and set about repairing it.

In the excitement with the broken shackle, nobody noticed the tail of the jib halyard slip up inside the mast.  Tanya had the idea to go ahead and pull the primary halyard out and replace the old secondary with the better line.  I’m sure my rigger can reeve a new secondary halyard, but it’s a tricky thing to do with the mast up.  I’m developing a list of things to do when the mast gets pulled next.  In the meantime, the kids have lost their swing.  They probably weren’t going to be doing much of that in the marina anyway.

With the jib back on the furler, we got back underway with the intent to get further north up the Exumas for jumping off to New Providence the next day.

We ended up at Shroud Cay for the night.  We missed this one on the way down.  Warderick Wells is really the only part of the Exuma Land and Sea Park we’d seen.  But every part we have seen has been amazingly beautiful, and Shroud was no exception.  The interior is a kayaker’s paradise, much to Tanya’s chagrin since we didn’t have time for her to go explore.  We all went by dinghy instead and still managed to enjoy it. 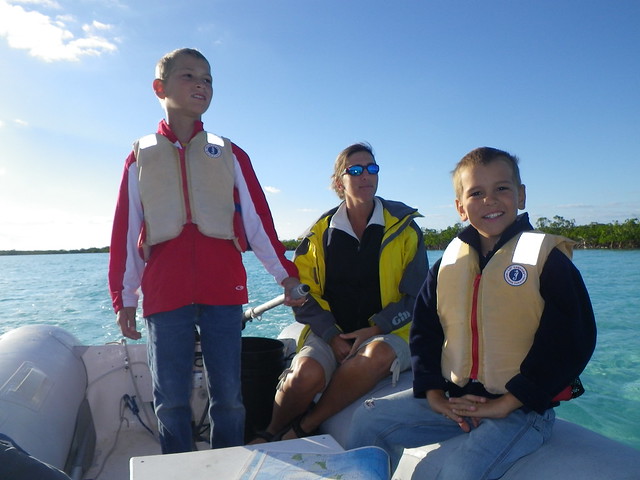 It should be a broad reach, and only about 40 miles tomorrow, so hopefully an easy day.

Today was a beautiful day for crossing over to New Providence.  Conditions were about NE 14-18 in the morning and gradually softened to about ENE 10-15.  It was a little brisk for the spinnaker to start, so we sailed above our course with the jib for about the first half, expecting the wind to clock and moderate.  It did and we bore off to set the chute.

This is family blog, so I can’t accurately describe what the sail did or any of my thoughts on the matter.  Basically it wrapped itself around anything it could.  I could not get it up or down.  We tacked, we gybed, I shouted curses.  The mess just got bigger.  Eventually I was able to drag it down, not caring if it tore, and stuff it down a hatch.  I waited awhile for my temper to cool and strength return to my upper body, and then began the chore of untangling the sail and repacking it in its sock.

We were doing okay without the spinnaker, but I needed to show it who was boss.  I was also counting on using it the next day.  The relaunch went much smoother and we carried it all the way to New Providence.

We just can’t seem to get a perfect day on this trip.