I made some new additions to Take Two’s instrument network this week:

Standard Horizon Matrix AIS GX2100 VHF radio.  This replaced our previous fixed VHF and gives us an “automatic information system” receiver.  Commercial vessels are required to transmit information like name, location, course, and speed (among other things) to other vessels.  Receiving AIS data helps other vessels identify, hail, and ultimately avoid each other.  Many recreational vessels are adding transmitters too, but a receiver-only solution was a much simpler install and suits our purposes just fine.  The GX2100 has its own display on the head unit as well as the optional remote we use at the helm.  It also outputs the data for display on other instruments.

MaxSea TimeZero navigation software.  For years, we’ve used a little handheld Garmin as our primary navigation tool.  It works fine, but I’d like a little more functionality and a bigger screen.  Unfortunately, a larger fixed mount chartplotter is a significant investment… and compromise.  So I opted to go with computer-based software instead.

MaxSea can receive the AIS data and does a very nice job displaying it.  The AIS data includes a ship’s length and width and MaxSea uses this to draw an outline of the ship.  From our slip we’re receiving AIS data from up to 20 miles away, which covers all the traffic in and out of Tampa Bay.  I’m a bit of a shipwatcher, and I find the AIS very entertaining.  I know when a ship is about to enter the Bay because I can see the pilot boat leave to meet him out at the sea buoy.  I can’t see Port of Tampa from here, but if he’s headed to Port Manatee, I can follow him through the lower Bay, and then watch the tugs maneuver him up to the quay.  The same data (upper bay only) is available online at http://www.marinetraffic.com/ais/, but it’s more interesting to watch with my own gear. 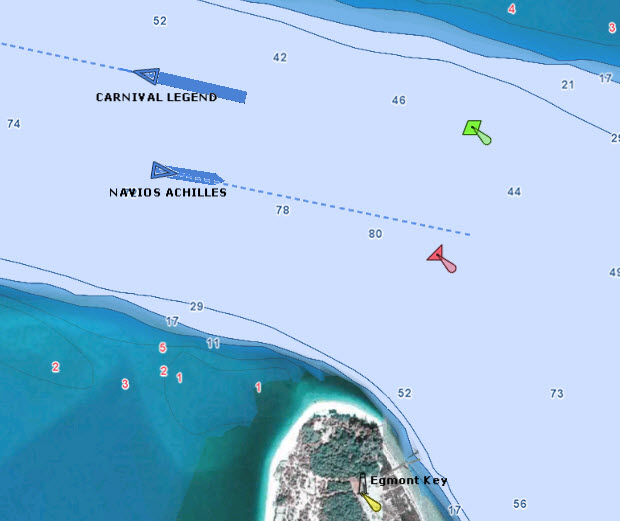 Asus Eee Pad Transformer tablet.  I’ve never felt an attraction to tablets, but I finally found an excuse to try one.  I still wanted a mobile display that could be used out at the helm or wherever I happen to be (like my bunk).  It runs Splashtop Remote Desktop HD and does a pretty good job controlling MaxSea through the touch interface over Wi-Fi.

I chose an Android tablet for this experiment because that’s what my phone runs, and I prefer open platforms.  Although Apple’s market dominance is undeniable, I’ve always found their products frustrating.  If the tablet turns out to be indispensable but an iPad becomes necessary, I won’t have any qualms about getting one of those as well.

Lantronix UDS2100 Serial-to-Ethernet converter.  This is to stream the serial data from our existing NMEA network through our wireless router.  It is a 2-channel model that can simultaneously handle the regular instrument data and the new AIS data, which are at different bit rates.  The converter includes a driver for the computer that represents each serial channel as a virtual COM port, so any computer application should work seamlessly.  Now the navigation computer can read with the boat’s instruments data and send waypoints to the autopilot wirelessly.

There are still a few issues that keep this from being a perfect solution:

The current crop of tablets aren’t quite suitable for outdoor use.  My laptop is daylight-visible, but this is relatively rare and I have yet to see a tablet that can be easily viewed in direct sunlight.  Being waterproof would also be another huge benefit for any device I hope to use at the helm.  And a way to mount it would be nice.  I have only seen one waterproof mounting solution (http://sites.google.com/site/dndistribution2011/), and it is only for the iPad.

I’m concerned about battery life on the tablet, but it shouldn’t be a big deal to plug it in at the helm, which is probably the only scenario where the display would be on all the time.  Being plugged in may not be compatible with being waterproof, though.

The combination of MaxSea and the Splashtop Streamer puts a serious load on the laptop.  I’ve had heat problems with laptops in the past, so I don’t know how well this setup will work in ambient summer temps.

I’d really like to be able to multicast the NMEA data to multiple devices, but I’m not sure I could do that with this setup.  I can envision having multiple tablets, each dedicated to displaying different information.  I may be overdoing it in this regard, though, since it looks like the marine vendors are already moving in this direction with their displays.  The new Raymarine i70 and Garmin GMI 10 products are both multi-function instrument displays.  They are waterproof and daylight-viewable, but they are also fixed in place and about $500 each.  That’s pretty steep when one iPad has more screen real estate than four instruments.

I’d also argue that marine vendors are not doing a very good job displaying wind and heading data in an intuitive way.  I’ve had some ideas along these lines and have created a prototype in Windows.  Part of the reason for getting the tablet is as a development testbed.  But that’s for another post.

Everything we do on Take Two is with a mind toward simplicity and redundancy.  While using tablets and running instrument data over Wi-Fi may not sound simple, it’s really not that bad.  The technology is used by millions of people and the parts are almost a commodity.  Besides, we haven’t removed any existing functionality.  We still have the USB connection for the computer, and we still have the Garmin.  We even have a sextant, not that we know how to use it.  Maybe there’s an app for that.