I found this recently.  It was written pre-blog, back when we had a house, a 22-foot monohull, and only dreamed about a bigger boat.  I love how worried I was about the kids falling off the boats.  That was before they were full-fledged boat kids.  But if I took them to a boat show today, I’d still have to yell at them for jumping on the trampolines.

We took the kids to their first boat show in St. Pete yesterday.

We’ve been trying to get them used to the idea that we may one day live on a boat. They’re intrigued, but understandably are somewhat dubious. Their only prior on-board experience has been a tour on one of my race boats and an afternoon on a pocket cruiser in Maine.

So yesterday we took them on a 36 ft. catamaran. It was the Jaguar, a South African cat. They were at the same show last year, which I thought surprising. Most of the attendees at St. Pete are the Florida builders. Hunter, Catalina, Caliber, Island Packet, Manta…? I had gone to the show specifically to see the Manta, a 42-foot catamaran, but they weren’t there. I was a bit put out.

The boys however, had a ball. I was annoyed and a little stressed out, so I’m sure I dampened their fun, but they definitely got the idea that this boat thing was alright.

I gave them a little tour, pointed out the important parts. “These are called lifelines. They can save your life. Don’t trip on the hatch. See the boom? You should always hold onto something. One hand for you, and one for the boat.” Which technically is the rule for when you’re peeing over the side, but it sounded like a good rule in general and I was paranoid about somebody falling overboard. “This is the bow. These are called trampolines, but they’re not really for…” Too late.

I probably had nothing to worry about. Given my height and size, I am a lot more precarious than they are. The boat was so big, they were hardly aware of the water at all. At one point, Aaron peered through the netting of the tramp and exclaimed, “There’s water down there!” Still, I had visions of somebody taking a bad bounce and going right off the bow. They were oblivious to the danger. I should throw them in the pool fully clothed to make the point.

Still annoyed, I didn’t want to go on any other boats and was ready to head home. The boys were not. They wanted more boats. We found one more their size and the sales rep was very nice to let them play in it.

Afterward I had the treat of paying $28 for 3 hot dogs, a corn dog, a pile of French fries and a smoothie. Still annoyed, I wandered off to browse the displays of anchors, life rafts, engines, and other nautical whatnot. My wife, having a fantastic ability to meet friendly people when I’m not around (go figure), strikes up a conversation with the guy playing kettle drums. It turns out that he and his wife are former charter boat captains. They came ashore to have their kids, now 1 and 3, and are ready to head back out to do the family cruising thing. I love how he describes his shoreside existence: “We have some stuff in Orlando”. It was good for her to have that interaction, talk to folks that share the same dream, and to top it off she scored some cool steel drum CDs.

After lunch, the boys still wanted more boats, but our policy is to “quit while you’re still having fun,” so we left. Although I didn’t get to see the boat that I was looking forward to, it was still a successful trip. The boys got an idea for what kind of boat we’re talking about and they left hungry for more. And a little tired, too. 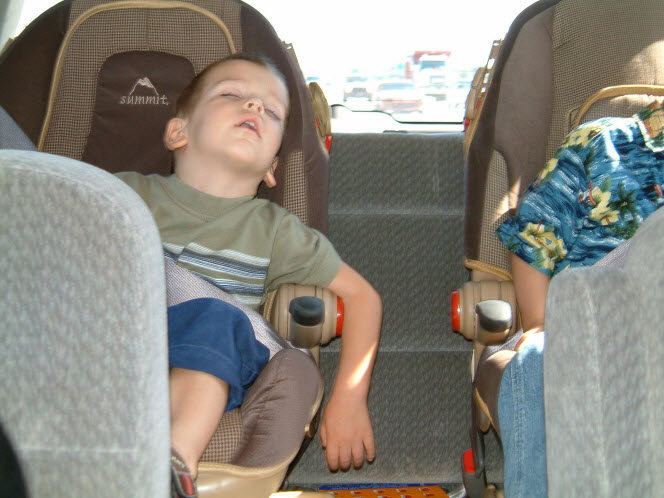