I’ve said a few times here that I thought the instrument manufacturers were falling pretty short on the display and visualization of sailing data.

I’m able to make do with what we have, which are analog needles for wind direction and LCD displays for numeric data like speeds and headings, but it takes a bit of imagination and mental effort to put the various pieces of information together into an accurate picture of what’s going on.  I suppose that’s good since it forces you to really pay attention (some would argue that any electronics are a crutch and a barrier to really feeling the boat), but it also means that the mechanics of sailing remain somewhat mysterious to people who don’t have an innate sense of it.

This is a situation that I think is beginning to change, primarily due to the technology advances in screens and microprocessors.  I can’t help crediting Apple for making pods, pads, and phones a part of daily life, thus creating market demand to drive the technology forward, and showing us that user interfaces don’t have to suck.

I also have to say that I don’t have my finger on the pulse of marine electronics, and I’m not even in the market to buy new instruments.  So I may not be 100% accurate on the capabilities of what’s currently available, but I think I’m pretty close. 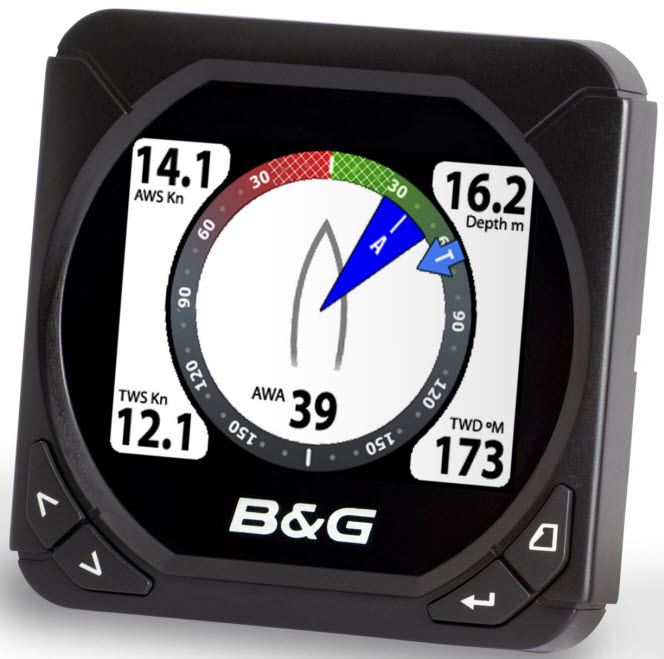 Without really looking too hard, this is the best display I’ve seen so far.  It is the B&G Triton T41, and Ben Ellison recently gave it a little writeup over on Panbo.  You may recall that I gave props to B&G for their Zeus displays.  Two points for B&G.

What I like about this display is the little “T” for true wind, and the cone around the “A”.  I assume the cone represents the actual variations in wind direction, and not just a fixed buffer around the current reading.  I’d feel more confident about this if their “A” in the image weren’t dead center in the cone.  Wind isn’t steady and naturally oscillates back and forth.  A good visualization would simultaneously show the range, the average direction, the trend, and hint what direction the next shift might be.

This is a step in the right direction, but I still want more.  About a year ago I felt tempted to try my hand at creating my own display.  I never had any delusions of grandeur, but thought it had potential to be useful.  The odds that I’m actually going to do any more with it are waning, and in order to cement my bragging rights later on, I figured I’d go ahead and show it.  Who knows, maybe some product development person, or somebody else with too much time on their hands, will build it for me.

This is a working prototype running in Windows and reading Take Two’s instrument data over Wi-Fi.  I know it doesn't look like much, but I'm rather proud of it.  This old dog can still learn new tricks.

We’re currently tied to the dock so there is no boat speed, and headings don’t change more than a degree or two.  Without speed, the True wind tracks the Apparent.  About half way into the video, I switch the display from “heading (inner dial) up” to “north (outer dial) up” to show the movement of the dials.

Improvements on the drawing board before development stalled include markers on either end of the apparent wind range, and a color gradient between them to indicate the average angle.

The next evolutionary step that I would really like to see is a visualization like this overlaid on a chart.  All chartplotters have a little icon to indicate the boat’s position.  The only instrumentation I’ve seen from that is the projected track (where the boat is headed a number of minutes into the future at present course and speed).  Why not a compass?  Why not wind angle indicators?  Why not laylines for your waypoint and opposite tack? Maybe the Zeus does some of this.

So there it is.  You might get the sense that I'm difficult to please when it comes to technology items, and you'd be right.  I often struggle with build vs. buy decisions.  Unfortunately (or not), I can't afford the time to tinker.  I recently found this blog by a guy building his own transducers, which I find fascinating.