Ever since we moved aboard Take Two and de-cluttered our lives, birthdays are less about stuff and more about making a memory. Instead of asking the kids, “What do you want?” we ask, “What do you want to do?” Sam just turned six, and what he really wanted was a repeat of his fourth birthday, which we spent in the Bahamas, jumping and diving off of Take Two into beautiful warm water with friends we had made there. We told him it would be “weather dependent,” but we knew it was too cold and windy right now in the Keys for a wet birthday. Instead, we surprised him with a camping birthday weekend with his cousins. 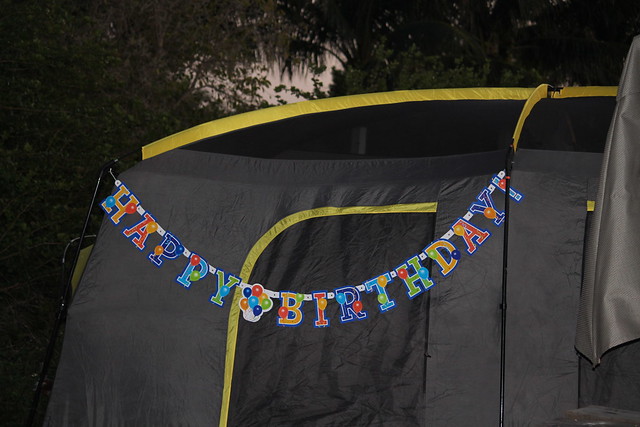 The last time I went camping with my brother, he was Sam’s age, and we were sleeping in my dad’s old army tents in Rocky Mountain National Park. Now my brother and his wife have seven kids and two tents, a collection of cast iron pans, two large coolers, and a propane camp stove to boot. They are real campers. We, on the other hand, never go camping and had to borrow our friends’ tent, inflate some air mattresses, and set up camp in their backyard (they live in a state park). We pitched tents on a Friday afternoon and tried to figure out what the sleeping arrangements should be. I had assumed there would be very little sleeping going on, so we planned for maximum fun: all the kids (minus the babies and toddlers) in one tent. That’s the eight biggest kids, plus two of our friends’ kids, for a total of ten.

The birthday dawned sunny and bright, with the first of the kids making noise around 6 am. It was going to be a long day. We took the kids on a field trip to Pigeon Key—we thought we could wear them out by making them walk the last two miles of the old Seven-Mile Bridge, but, as it turns out, kids don’t wear out, but moms and dads do. At sunset, we gave away glowing bracelets and let the hooligans run wild in the dark. I think they were playing Cops and Robbers, but it sounded more like Cowboys and Indians. When everyone got hungry, we passed out roasting sticks and hot dogs. Nothing better than a meal cooked over an open fire. We then gathered around and set six marshmallows ablaze to sing Happy Birthday to Sam. And then the S’more factory went into high gear, with children roasting marshmallows faster than I could assemble graham crackers and chocolate. Yum… 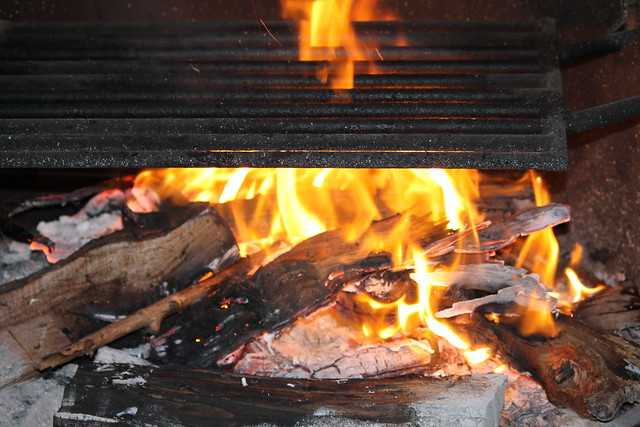 After they were done around the fire, we sent "tired" kiddos into their tent. Backlit by the battery-powered lantern, you could see the silhouettes bouncing around like molecules of hot gas caught inside a balloon. It looked like the tent might explode at any moment. At some point, Sam escaped from a leak in the tent and came to sit with us, periodically placing logs on the fire and generally messing about with burning sticks. He has the makings of a pyromaniac, that one. He’s a wild child, full of life and exuberance and boundless energy. He’s a lot like Tigger, and I’m sometimes like Rabbit—while I’d like to remove some bounce, I would be lost without him. 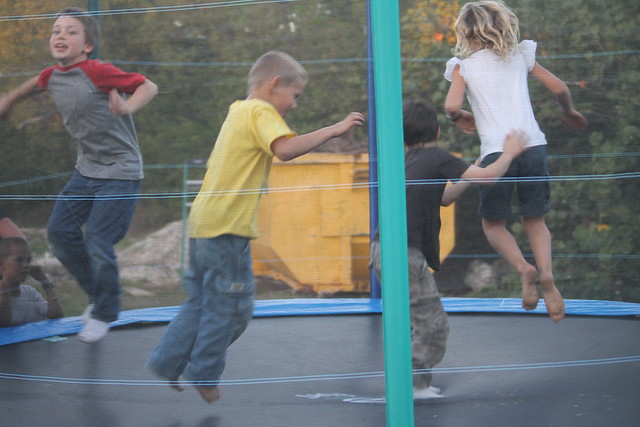 As the fire burned low and the kids began to grow quiet, the grownups drank the last of their drinks, ate the last of the S’mores, rocked all the babies to sleep, and solved all the world’s problems by firelight. It was a birthday we’ll never forget.

Lying awake under the stars (slapping at No-see-ums which had snuck into our tent), I realized that the reason why we never go camping, aside from the fact that it’s uncomfortable and our tents are in storage, is that our regular life aboard contains enough of the Outdoor Adventure to sustain us through all the mundane parts of life like work, school, and chores. We have access to wide open spaces, the occasional deserted island where we can light a bonfire out of driftwood, kayaking, hiking, swimming, and a change in surroundings whenever we get the itch for something new. We don’t need to go camping to sleep out under the stars because there’s a hatch over each bed, giving us a nightly panorama of the cosmos. You might think we would become bored by this, but the constant change Nature provides keeps amazing us and infusing our normal lives with a sense of wonder.