I just read an article on Panbo that grabbed my interest.  It’s about how Navico is aligning its three(!) chartplotter brands (Lowrance, Simrad, and B&G) around small boat fishing, big boat fishing/cruising, and sailing respectively.  The B&G stuff looked very promising last year, but was very high-end and therefore mucho dinero.  Instead I bought a fishing-oriented Lowrance HDS-7m Gen2 because it was a brand new model, had satellite weather, and was cheaper.  The article goes on to wonder how Navico will adjust their B&G brand lineup to address the lower-end of the sailing market.

I was losing interest and beginning to skim, but then I got to the bottom and saw this screenshot. 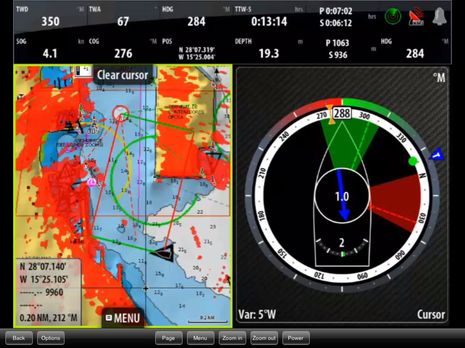 Wow!  Now that got my attention.  The layline stuff on the left is old, I’ve seen that before.  But the graphic on the right is entirely new to me.  Although now that I look, I see the press releases for it are almost 5 months, so I'm a little bit behind.  Anyway, it looks strikingly similar to a prototype I made in August 2011 and wrote about here.  The key aspect being the compass dial with indicators around it.

They call it SailSteer and its available on their Zeus Touch plotters.  From what I can tell, they’ve done everything I wanted and more.  I see the waypoint, true wind, laylines for the current and opposite tack, rudder angle indicator, and even direction and velocity of the calculated tidal current all in one place.  I’m feeling quite compelled to buy it.

I like Navico for their innovation, and am very excited about what they’re doing with B&G.  My Lowrance plotter is okay, but not great.  It isn’t any worse than I expected.  They made it for fishing boats after all.  But it can interface with their 4G radars, which are spectacular and on my wish list.  If I get a B&G for the helm, the Lowrance will come inside.  It will continue to be our source for satellite weather and radio, as well as an inside plotter and eventual radar display.

From my perspective, the big downside to Navico (and Raymarine) plotters is their use of Navionics charts and Navionics’ sub-par data in the Bahamas.  Navionics is great in the US because they (like everyone else) get the data from NOAA.  Where do they get their Bahamas data?  I don’t know, but it isn’t from Explorer Charts, which is the gold standard for the Bahamas.  Garmin licenses the Explorer data for its products.  So when we’re in the Bahamas next I may be using fancy B&G instrumentation for sailing, but I’ll be using our little handheld Garmin to reduce the chances of running into stuff.

Just last month a relatively new Lagoon 450 was wrecked on a reef in the Exumas when the skipper put too much faith in his Navionics charts.  The chart in question even has a nice magenta dotted line that looks an awful lot like a recommended route.  One look at an Explorer chart and he would have steered clear.  All the gory details including an account from the skipper and a response from the owner of Navionics can be found here.

I’ve learned a few things that warrant an update to this post:

First, we’ve been cruising the Bahamas with Garmin’s data (licensed from Explorer) and Navionics’ side-by-side and I’ve seen firsthand how stark the difference is.

Second, a friend pointed out that users of MaxSea/Furuno/Nobeltec products can get data through MapMedia that is from “Datacore by Navionics”.  This data for the Bahamas looks very similar to Explorer data.  Perhaps it is Explorer data, or perhaps there is a common lineage.  I’m sure Explorer must have originated from another source.

Third, Jeppesen has a new product line in its “C-Map by Jeppesen” family called C-Map MAX-N.  The “-N” is for Navico and will be available for current chartplotters from Navico brands Lowrance, Simrad, and B&G.  C-Map uses Explorer data exclusively in the Bahamas.

Explorer's own explanation of where their data is available can be found here.