We came with very few goals except to hang out in the Exumas and have some fun.  I had a long-standing promise to the kids I needed to make good on, and two of Tanya’s Top 10 favorite places on Earth are here.

So far it’s been a bit of a reunion tour since we’re unintentionally retreading old ground.  Weather avoidance is de rigueur in the northern Exumas and we’ve been calling on prior experience to find effective shelter.  Things are a little different this time since we have a full-blown SSB transceiver to get weather forecasts, which allows us to plan ahead instead of being entirely reactive.

We checked in at Chubb Cay, which was new for us.  I think a lot of people eschew Chubb because of their $100 landing fee.  They offered to let us put it against fuel, but I declined.  I understand they’ll also put it against dockage, but we wanted to keep moving.  So with the $100 landing fee, the $10 bus ride to the airstrip, and $380 at customs, we were legal.  It was a convenient place to stop and we’d do it again, but otherwise I didn’t see anything to write home about.

We have more avid and capable snorkelers this time.  During our weather-bound stay at Highborne Cay, we did another family snorkel at the Octopus’ Garden.  It’s much less stressful not having to worry about little kids, and it’s really convenient having four spotters wanting to show me all the best parts, but anybody who has taken a nature walk with a bunch of kids knows they’re not going to sneak up on anything.

Some local lobster pros were at work on the bar between Highborne and Leaf Cays while we were there.  Lobster season here ends 3/31, so we figured we’d try our hand.  Eli and Aaron haven’t developed much taste for lobster yet, but they love the thrill of the hunt.  Based on our results so far, if we want lobster we’ll have to buy it.  They’re just too deep.  The pros are using air, which we’re not allowed to do.

I find myself looking for conch.  Not to take it, mind you, because foreign vessels are not allowed to do that either, and frankly because I don’t care for conch that much, but really just to assure myself that they’re still there.  Ten out of ten conch shells we see have already been harvested.  The live ones we do find are all juvenile.  Sam brought me a big conch shell today that he said was alive.  It sure was, but it wasn’t a conch inside.  Poor kid doesn’t know what the real animal looks like.  Living in that shell was the biggest hermit crab any of us had ever seen. 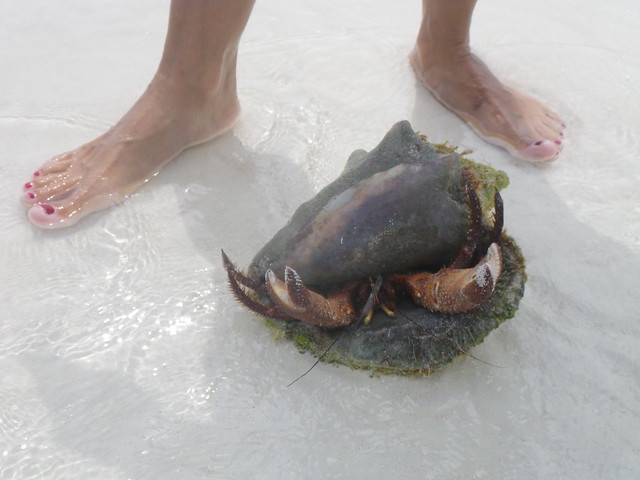 Now we’re at Warderick Wells in the Land and Sea Park.  So whatever might be underwater is off limits.  Internet access is via satellite and costs $10 a day with a 100MB limit for boats that are on their moorings.  We have no use for a mooring but hunger to check email.

Our plan is to be fully back online the second week of April, but our plans are always subject to change.  It looks like we may have let the magic smoke out of our main generator, so we’re trying to adjust to a leaner power budget, and balance our fuel supply with our other means of power generation.

Otherwise we’ve had few failures.  A v-belt broke on one of the engines, but we had a spare.  Plenty of food and beer left, though we’ve shut down one of the refrigerators to save power.

So far we have failed to try out the new 4G network.  If we make it as far south as Staniel Cay, which I think is the closest BTC office where we can get SIM cards, we’ll try to get that remedied.  A decent Internet connection could make a world of difference.