There comes a point in every haulout when we just want it to be over.  We hoped for Day 21.  We planned for Day 22.  We stretched for Day 23.  We prayed for Day 24.  But none of it was meant to be.  Now it’s looking like Day 26 or 27.
I thought we were ready on Day 23.  I paid the overtime to launch on a Saturday, but when Billy put the boat in the water, we had bad leaks from the shaft seals.
Most boats seal their shafts with a stuffing box that drips a little all the time.  We prefer a dry bilge and have Lasdrop “dripless” seals.  The irony of a “dripless” seal is that if it leaks at all, you’re completely screwed because it probably can’t be fixed in the water.
Billy pulled the boat back out and I spent Saturday evening communicating with Lasdrop and trying short-term remedies.  You gotta love a company when you can get the president on the phone at 8:30 on a Saturday night.
My short-term solution was to polish the surfaces of the seal with some 400 grit sandpaper.  I had high hopes for this and called Billy at 10am Sunday morning to give launching another try.
No dice.  Billy put the boat in the water, but the seals still leaked and we had to pull her back out again.
Now we need to go for the long-term solution and replace the seals entirely.  The company has more remedies, but I’m not messing around.
Why we didn’t do this from the get-go is a very good question.  We replaced everything else in the engine rooms.  Why not the shaft seals?  I don’t really know.  Because they didn’t seem to need it?  The cost is insignificant to the overall project and certainly to the expense of our sanity at this point.
The new seals won't arrive until Day 26 and it will be a stretch get them installed and the boat launched all in one day.
The good news is that the engines run like tractors.  We did little more than start them and put them in gear, but they’re ready to plow a field.  We had to crank for about half a second before they fired for the first time.  Very encouraging.
The detritus of the project has begun to disperse into the trash, man van, or recesses of the boat as appropriate.  Spice has rediscovered the rug. 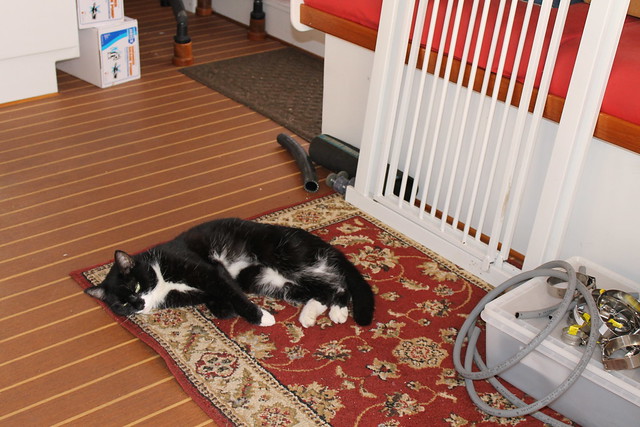