We crossed the Gulf Stream in mid-July and stopped in Ft. Pierce for a couple of weeks to visit old friends, replace our brand-new malfunctioning chart-plotter, and order a new alternator to replace the one we fried. Deciding that we had plenty of summer left and nothing pressing to do in Florida, we headed up the coast with a general goal of taking the kids on an extended U.S. History field trip, starting in the nation’s oldest city and ending up (Lord willing and weather permitting) in the nation’s capital.
We arrived in St. Augustine on a very special date: Eli’s 13th birthday. Making a passage is probably not the way any of our kids would choose to spend a birthday. We tried to make up for it by going ashore for a nice dinner at Columbia on St. George’s Street, but it backfired as most of the crew was still feeling the residual motion of the boat and didn’t have much of an appetite.
We spent the next several days touring the old part of the city and visiting museums and historic places and enjoying lunches out (a rare treat for our large family). Jay has been working as we travel this year, so he joined us whenever he could and enjoyed some quiet working time on the boat when he couldn’t. The old city is beautiful, in part due to its Spanish colonial influence—it was planned around a plaza like an old-world city, and also thanks to the beautiful architecture of Gilded-age hotels and churches built by Henry Flagler in the early 1900s. 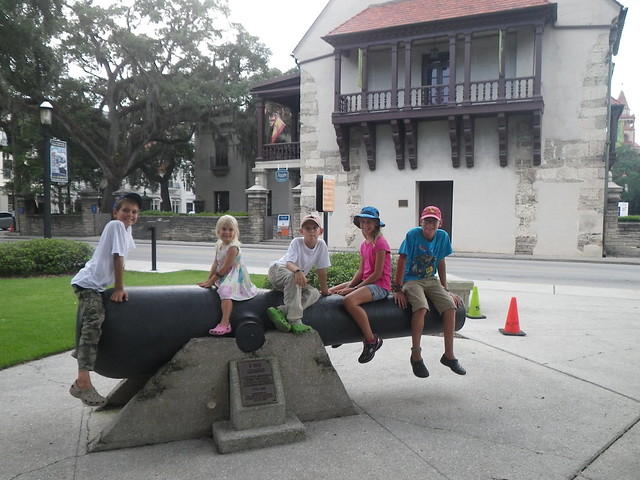 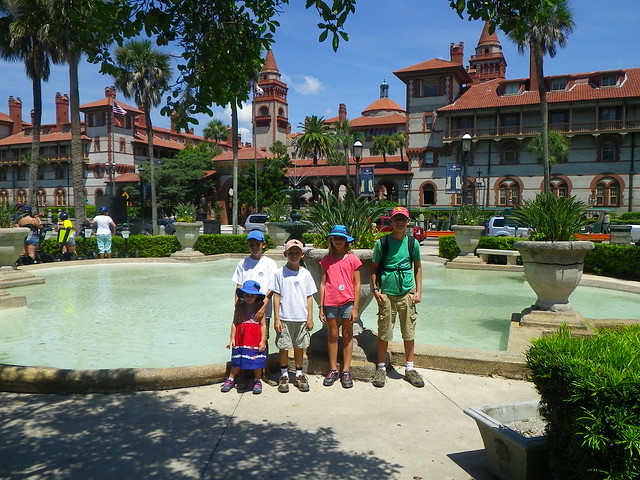 St. Augustine is very boater-friendly, and convenient for visiting by water. Most of the museums, old buildings, and restaurants are walking distance from the municipal marina, which has a breakwater and floating docks, as well as a mooring field and dinghy dock. The Red Train has a station at the marina, near the nation’s oldest mini-golf course, making it convenient to take a guided tour of the city and get a round of $1 mini-golf! Getting groceries proved a bit more challenging, with the closest grocery stores requiring a taxi to go out of the old city or a dinghy to go across Matanzas Bay to the Publix near Vilano Beach.
The Castillo San Marcos, the most remarkable feature of the St. Augustine water-front, is just a short walk from the municipal marina. This Spanish fort is over 300 years old, but has aged beautifully—the sedimentary stone of which it is built (made by Nature of compacted coquina shells) shows little sign of crumbling, and the bronze cannons are still beautiful, though their cast iron counterparts have not fared so well. In its long and varied history, it was assaulted many times by many different nations, but was never taken in battle. A walk around the fort, now a part of the National Park Service, makes it clear why this should be. We found the ranger talk and the museum exhibits inside the rooms of the lower level to be helpful and informative. The tickets were inexpensive and good for a week—long enough to come back on a weekend and see the cannons being fired off in a re-enactment. 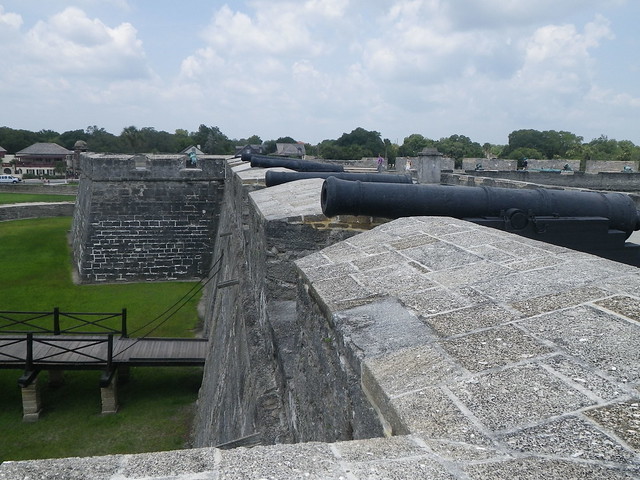 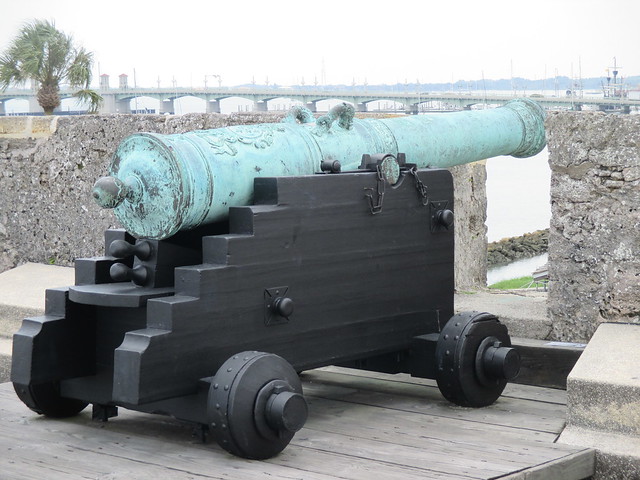 We decided to ride the Red Train, a guided tram which runs in a circuit around the city, stopping at major points of interest. For our family of seven, it cost about $100 for a three-day pass, and we could hop on or off at any point, as the trains run continuously until 4:30 and stop every 20 minutes or so on their one-and-a-half hour tour. Some highlights of the tour include stops at the Old Fort, Old City Gates (with access to St. Georges Street, a walking street with restaurants, shops, and museums), the Fountain of Youth Archeological Park (which has a natural spring, Timucuan artifacts, and history related to Ponce de Leon’s discovery of Florida in 1513), the Victorian Jail built by Henry Flagler, the Colonial Quarter living history museum, the only Martin Luther King Jr. Avenue in America on which the famous civil rights leader actually led a march, Flagler College (once the posh Ponce De Leon Hotel, one of the first buildings in America to be lit with Edison’s electric lights), the Florida School for the Deaf and Blind (where Ray Charles went to school), the Lightner Museum (housed in what was once Flagler’s Alcazar Hotel with the largest indoor swimming pool in the world), the Memorial Presbyterian Church (built by Flagler for his daughter, and containing a 5000-pipe organ, Tiffany stained glass, and the family mausoleum), the Plaza, the Basilica of St. Augustine, and Aviles Street, a narrow, Spanish-colonial-era street with more shops, museums and restaurants. 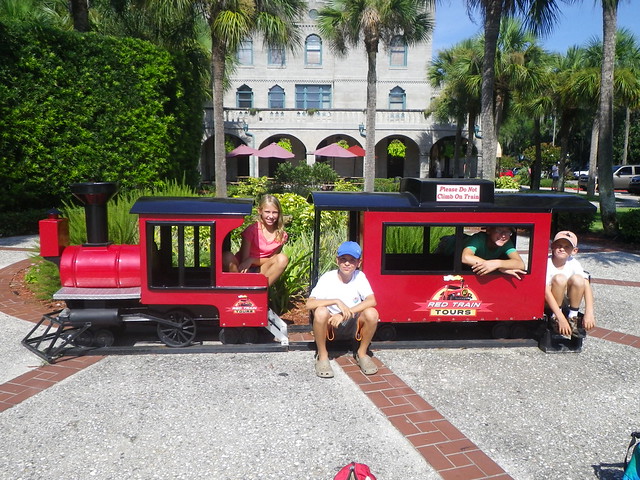 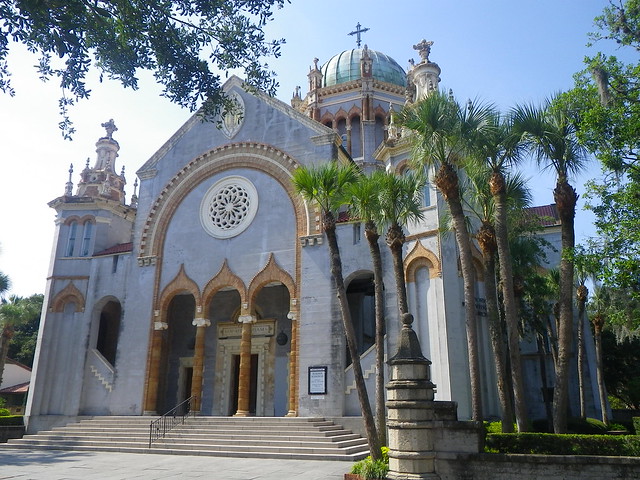 One of our favorite stops was the living history museum at the Colonial Quarter. In a one-hour guided tour, you can experience the changes in St. Augustine through the centuries, from 16th-century Spanish settlement, to 17th-century fortified town, to 18th-century British Colony. The knowledgeable and authentically-dressed guides walk you through exhibits like the building of a wooden Caravel, a working blacksmith shop, the firing of a Flintlock rifle, replica Spanish colonial homes and the restoration of an original coquina house. The museum is laid out so that you can walk through the different sections after the tour at your own leisure to get a closer look (and read those ubiquitous plaques). You can climb the rebuilt Spanish watchtower for a great view of the Castillo and the old city, see a display of the many flags that have flown over St. Augustine, see how a printing press works, and visit the gift shop, which contains some unique items. You can then take your admission bracelet to either the Spanish Taberna or the British Pub, Bull & Crown, for a discount on drinks or food. It was a great way to get an overview of the rich history of this city. 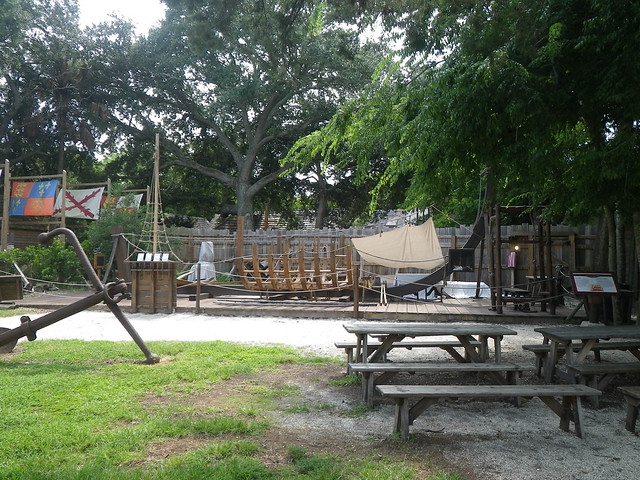 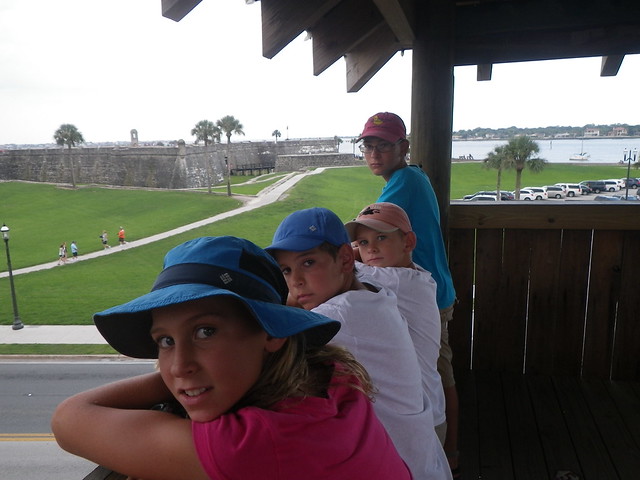 We celebrated another special day on August 2nd—our 17th wedding anniversary (and, not coincidentally, the 17th birthday of our remaining boat kitty, Spice). The next day, the 5-year anniversary of our move aboard Take Two, we moved the boat to a marina and resort on Anastasia Island so that we could have better access to the grocery store, beaches, a swimming pool, and parks. A long walk or short dinghy ride gives you access to the St. Augustine Lighthouse, one of the few remaining working lighthouses in America which you can climb. The museum there is partnered with the Smithsonian and includes a hike up the 219 steps of the 1873 lighthouse where you can go out on the balcony and enjoy the 360⁰ view, the beautifully-restored 19th-century keeper’s house, a boatyard which restores vintage wooden craft, and an exhibit highlighting underwater archeology. It’s a must-see if you’re in the area. 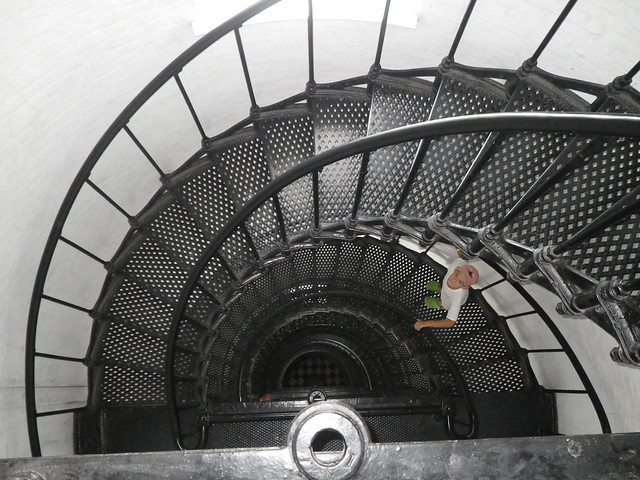 The Atlantic beaches in St. Augustine were a bit of a disappointment. To beach connoisseurs like our kids, the water was too cloudy, the sand either too dirty or too shelly, and the waves were either too small for surfing or broke too close to the shore to be of any use. Despite our being spoiled beach brats (thanks to Bahamas beach perfection), we still enjoyed ourselves at Vilano Beach (a car beach!), and at the beaches on Anastasia Island. You can find wide swaths of relatively deserted beach at the state park, or better conditions for surfing and body-boarding near the pier at the public beach.
We also enjoyed meals out in St. Augustine, and found the selection and quality to be very good. Lunch at A1A in the old city was high-quality, fresh and original. Our anniversary dinner at Centro Piano Bar was classy-gourmet in a great atmosphere, and the Mellow Mushroom on Anastasia Island is the some of the best pizza we’ve ever had. The Conch House on Anastasia is a fun place to eat as well, with lots of seafood options and seating in little tiki huts over the water. (And their key lime pie is at least as good as pie found in the Keys.) Our impression after a few weeks in St. Augustine is that this is a beautiful town full of history, gorgeous architecture, great restaurants, and lots to do.