Over the course of our family’s snorkeling career, we have dived on the wrecks of several planes and ships. The most recent of these is the wreck of the RMS Rhone. The Royal Mail Ship Rhone sank off of Salt Island, BVI, in 1868 during a hurricane. Another mail ship, the Conway, also sank in Drake Chanel in the same hurricane.

As it sank, the metal steamship broke into two sections. The bow section fell in 80 feet of water, and is largely intact. The stern section sank closer to shore, in 25 to 70 feet of water, and broke into even more chunks. The largest piece, the very rear of the ship, is in 30 to 45 feet. Clearly visible in the wreckage is the gear box, drive shaft, rudder, and huge bronze propeller.

We were anchored nearby, and decided to check it out. We dinghied out to the wreck, laden with snorkel gear, and tied up at one of the numerous moorings over the area. We were joined by some friends on Abby Singer, who also wanted to see the wreck. We swam towards the buoy, looking for the debris of the sunken ship. We found nothing but rocks and a school of squid. It wasn’t until an enterprising young diver (me) decided to search in the other direction, did we find the stern chunk.

I made several dives over the main section, looking for the captain’s silver tea spoon, which was, according to our diving guide, resting on the gearbox. Unfortunately, I never found it, but I did find a large number of colorful corals and reef fish. I swam on to view other pieces of the wreckage, including the ship’s disco (with checkered tile floor intact), and the engine. The side of the engine was laid bare, revealing the barnacle-encrusted crankshaft and pistons as large as myself. It was weird to imagine that these rusted and overgrown pieces of machinery once operated smoothly.

The coolest thing though, was the prop cavity. Twenty feet deep, the area where the broken propeller used to spin left a cave that led under the hull and out the other side. The inside was coated in a dense layer of multi-colored sponges. There were also large schools of little brown fish with forked tails and bulging eyes, and five or six grouper.

I swam down and inspected it, weighing my odds of success if I went through. It wasn’t that far to the other side, only 15 feet or so, an easy distance (for me). But what if I can’t hold my breath long enough… Nah, I’ll be fine. I swam in. It was weird, the minute I went underneath the hull, the urge to breathe lessened, allowing me to leisurely swim through the prop cavity and up to the surface. I made several such dives. I don’t know why it’s so fun to swim under things, but I sure get a kick out of it!

The next day, Andrew on Abby Singer and I went back to the wreck, him because he wanted to get video footage of the ship, and me because I always want to go snorkeling. I swam through the tunnel a few times, and once again searched in vain for the Mystic Spoon. This second trip to the wreck no-doubt contributed to my advanced condition of TMF (Too Much Fun), but it was so worth it. The Rhone was even better the second time! Visiting it was one of the coolest snorkeling trips ever. 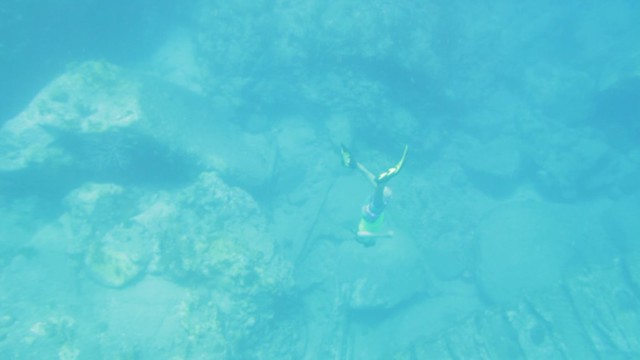 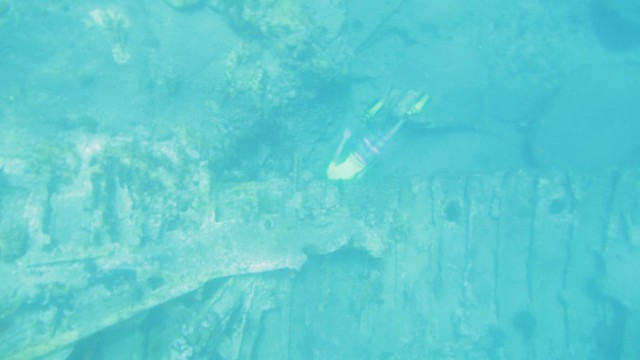 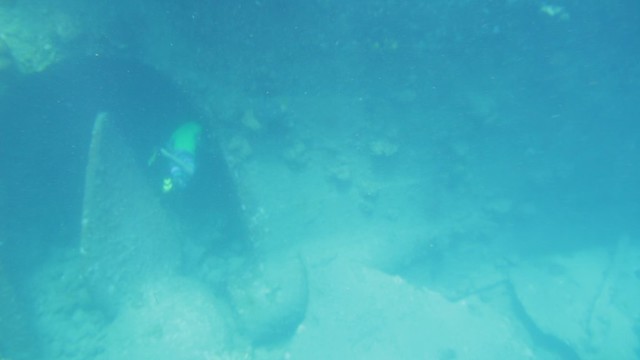 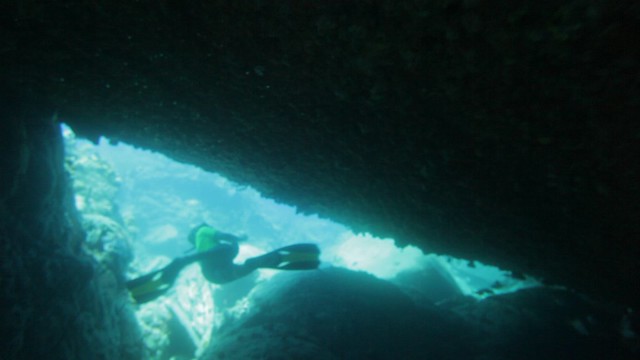 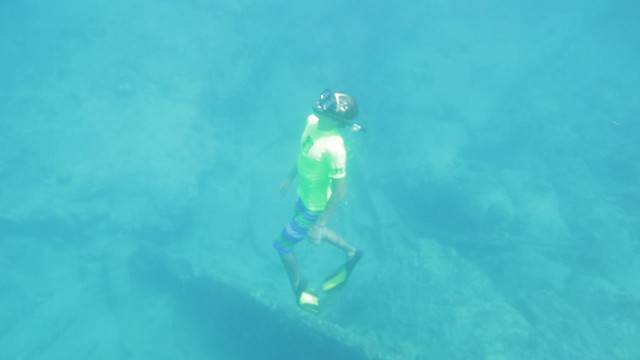