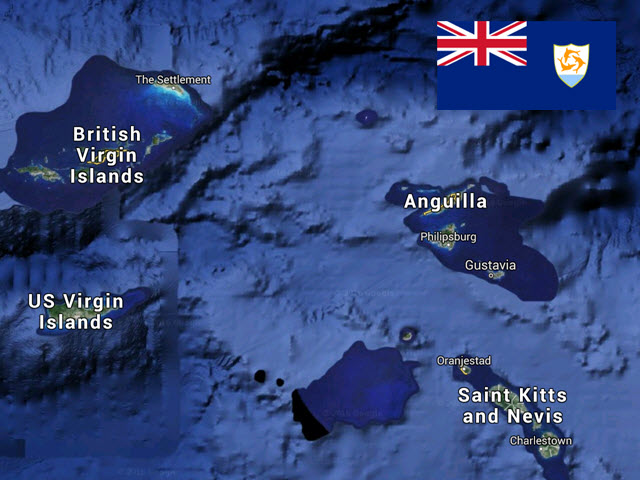 Capital: The Valley
People/Customs: Approximately 14,000 people populate the island of Anguilla, most are the descendants of African slaves, but there are a few of Irish descent. Anguilla receives almost 180,000 visitors each year.
Language: English
Climate: Average annual temperature is 81°, average annual rainfall is 35 inches.
Food/Farming: Used to export tobacco, cotton, and salt. A few local farms provide fresh produce to the restaurants, and there is some fishing and lobstering.
Government: Anguilla is a British dependency and has a governor appointed by the queen.
Currency: East Caribbean dollar or US dollar
Art/Music/Culture: Typical West Indian culture with a blend of African and British influences. Because of their dependence on the sea, they are known for their boatbuilding and racing. These churches can be found on Anguilla: Anglican, Methodist, Roman Catholic, Seventh Day Adventist, Baptist, Jehovah’s Witness, and Church of God. Holidays include the Annual Yacht Regatta in May, the Queen’s Birthday in June, and the Summer Festival the first week of August (Emancipation is celebrated on the first Monday in August, “J’Ouvert”).

Anguilla was populated by Amerindians about 3500 years ago, first by Arawaks, and later by Caribs. When the Spanish Explorers discovered this island they named it Anguilla, which means “eel” in Spanish, possibly because of its elongated shape. The first successful European colonizing attempt was made by the British in 1650. It has been a Crown Colony ever since, though England has thwarted a few French attempts to take control of the island. A plantation economy failed to develop here because of the arid climate, though there were some slaves imported to work the farms and salt ponds.

The early 1800s brought with it change and decline for Anguilla, which the British attempted to prevent by grouping it in with the combined colonies of St. Kitts and Nevis to make an associated state of the Caribbean. Anguilla viewed the effort as subjugation under the more influential St. Kitts, and revolted. They pushed St. Kitts police off the Island, and Britain, still commanding control of the three islands and apprehensive that the rebellion would lead to bloodshed, continued to try to reach a solution for two years. Britain finally agreed to drop the notion and leave Anguilla as a dependency. There were no fatalities throughout the entire ordeal.

Today, Anguilla is considered a tourist destination because of its upscale resorts, restaurants, and white-sand beaches, however, it does not have a cruise ship port or any marinas, like its busier and more-popular neighbor, St. Martin. Many people come here to have a quiet beach vacation.

Anguilla is dry and hilly, most of the grass is overgrazed by the free-range goats that roam the island. Sea Grapes and Coconut Palms are abundant. Eighty species of birds can be found in Anguilla, including the bananquit and the green Antillean crested hummingbird.

Take the ferry out to Sandy Island, visit some of the best beaches in the Caribbean (Rendezvous beach is #2 in the Caribbean), Scuba dive, go to Blanchard’s Beach Shack in Meads Bay or Roy’s Beach Bar and Grill in Sandy Ground, enjoy fine dining at Ripples or Veya (near Sandy Ground), rent a car and drive the island.