I remember quite clearly the first time I asked for directions in French. I was a sophomore in high school, visiting Quebec with some friends of my parents, Peter and Linda. Linda is French Canadian, and we had struck up a bilingual friendship the previous year when they had come to visit us in Florida. I had taken one year of high school French in a part of the country where a large segment of the population speaks Spanish. As is often the case, one small decision—like which language class to take—leads one down a long and surprising path.

We were in a restaurant in the old city, and I asked for directions to the ladies’ room. Evidently, my ability to ask basic questions surpassed my ability to comprehend the answers, as the hostess responded with a long and very fast explanation involving only a few words of which I caught—something about “stairs” and “to the right.” Too proud to admit my ignorance, I smiled and thanked her and went looking for some “escaliers.” (I eventually found les toilettes.)

Peter and Linda lived in a rural village 20 minutes south of Middlebury, Vermont and that summer visit whetted my appetite for both language immersion and, coincidentally, Middlebury College. Two years later, I found myself conversing awkwardly at the French table in the Middlebury Chateau Language Café, out of my league with students who had had four years of French in prep school and a score of 5 on the French AP exam. Beyond French I and II with my Egyptian teacher, Madame Assaad, at my public high school, the only speaking practice I had had was with the Quebecois on my summer trip and Haitian refugees in my hometown. But after 2 years and a semester abroad at Middlebury’s Paris campus as well as many fun weekends in Montreal, I had even begun to dream in French—the holy grail of language-learners.

After Middlebury, my opportunities for language practice were only occasional, but often essential. I worked for several years as a teacher in an Atlanta-area public school where my training at Middlebury and my ESOL (English to Speakers of Other Languages) certification were quite helpful. The school was about 80% non-native-English-speakers. Translators for parent-teacher interactions were hard to come by, especially for the Vietnamese students, but lucky for me, and thanks to French colonialism, many of the Vietnamese parents had grown up speaking French in school, so I was able to help find common ground with a group of people who often felt alienated in their new country.

Twenty years have passed since I first asked for directions in French, and though I don’t get many chances to practice, the French language is deeply embedded in my memory. After sailing from Dominica, we anchored near the village of Saint Pierre in Martinique. Jay and I had to locate the café in which to fill out the customs paperwork, the Digicel store to buy a SIM card so we could have internet access, and a bank to withdraw some cash in Euros. A few days later, we took Le Petit Train Tour, which runs all over Saint Pierre, describing its former opulence and showing its devastation by Mt. Pelée; because the tour was in French, I had to act as real-time tour translator for the kids. Somehow, despite twenty years of vocabulary loss and imperfect grammar, I navigated all of these tasks in French, and also found the three things I’d been looking forward to in Martinique: le vin, le pain and le fromage! We even made friends with a French family anchored in Fort-de-France. These experiences make me feel so grateful for Middlebury’s immersion program and the gift of a second tongue. I hope the exposure to French and Spanish in the Caribbean will do for our kids what a visit to Quebec once did for me. 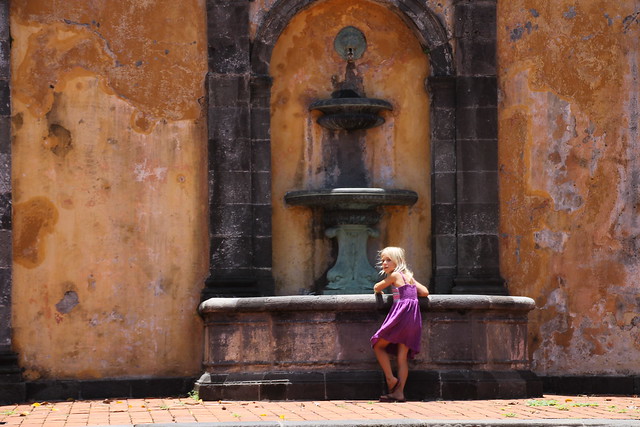