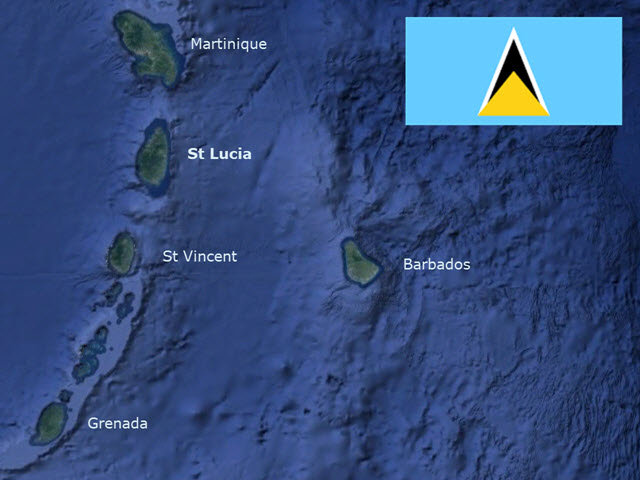 Capital: Castries
People/Customs: approximately 150,000 people live on St. Lucia, mostly descendants of slaves or people who immigrated from other Caribbean nations to work in the hospitality industry.
Language: English
Climate: In the winter the high is around 81°, the low, 72°. In the summer, the high is 86°, the low, 77°. Hurricane season (rainy season) is from June to November.
Food/Farming: Bananas, Coconuts, and Cocoa are the most productive crops on St. Lucia. They also export rum made from sugar cane.
Government: St. Lucia is an independent state within the British Commonwealth, represented by a Prime Minister.
Currency: The East Caribbean Dollar (EC) is used here.
Art/Music/Culture: English, French, African, and Caribbean cultures influence St. Lucia. Carnival is celebrated in July.

The Spanish discovered St. Lucia in the 1500s and the British later attempted to settle the island, but after 2 years of attacks from the Carib tribes living on the island, the effort was abandoned. The French took interest in St. Lucia and struck an agreement with the Caribs. The first town, Soufrière, was settled in 1746 by the French and plantations were established on the island. Then for the next 150 years the British and French traded control of the island until 1814 when the Treaty of Paris ceded St. Lucia to the British. African slaves worked sugar plantations until they were emancipated in 1834. French influences can still be seen in the music, food, and city names. English became the official language in 1842, and locals speak a French-based Patois. Tourism is now the main industry in St. Lucia, though agriculture still accounts for about a third of the economy.

St. Lucia is 27 miles long, 14 miles wide, and has roughly 238 square miles. The highest peak is Mt. Gimie, the second highest is Gros Piton, and the third is Petit Piton. Much of St. Lucia is covered in rainforest, complete with tropical fruit trees and animals like birds, insects, and frogs. The Jacquot Parrot is the island’s national bird and almost went extinct.

Visit fort ruins on Pigeon Island, Castries Cathedral of the Immaculate Conception, the beach at Rodney Bay; scuba dive or snorkel near Soufriere and the Pitons; spend the day at Marigot Bay (Capella Resort or Doolittle’s on the beach); rent sailboats (Rodney Bay, Marigot Bay or Sugar Beach); hike Gros Piton or climb Petit Piton, hike to the waterfalls or sulfur springs; or go to the “drive thru volcano” and mud baths.