Let’s talk about storms for a minute. During our time on the boat, we have seen some varied and nasty weather (we have also seen some pretty good weather too, but I won’t waste your time on something so boring). We have seen towering water spouts come within less than a mile of us. We have had waves wash over our cabin top and flood the cockpit. We have endured torrential rain, hail, lightning storms (blue, white, and pink), 50-knot winds at sea, and 12-foot swells. Once, Dad slipped on ice that had formed on the deck during a record Florida winter. But so far, we have never faced a hurricane. 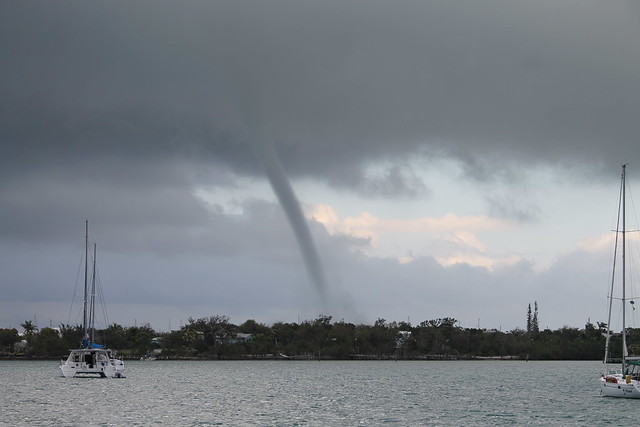 The monster that became hurricane Matthew started out as a tropical wave way out in the Atlantic Ocean. It was clear from early on that it was going to develop into a tropical storm, and it was headed straight for Grenada, our current place of residence. Hurricanes, or tropical storms for that matter, almost never swing this far south, so Grenada is considered outside the hurricane belt. This does not mean that Grenada doesn’t get whacked, it just doesn’t get whacked very often.

Hurricane Ivan in 2004 was the last major storm to hit Grenada. It killed 39 people, and devastated homes all over the island. The capital, St. Georges, suffered severe damage, and several notable buildings were damaged or destroyed. The entire island was left without electricity or running water, and it caused $1.1 billion in damage. The only good thing about Ivan (if you are a criminal, that is) was that the 17th century prison broke open during the storm, allowing many of the inmates to (briefly) escape.

Initial forecasts of tropical storm Matthew looked grim. It would either pass to the north of us, and hit the northern end of Grenada, St. Lucia, and St. Vincent and the Grenadines, or it would swing to the south of us, hit Trinidad and Tobago, and flood our marina with sustained high winds. The worst case scenario, however, would be if it went directly overhead and we got the winds from the eye wall. That would be bad. In anticipation of this, we began to scout out places to hole up the boat, as marina policy forbids catamarans from staying at the dock in the event of a hurricane. The ten mooring balls just outside the marina were a viable option. Attached to two eight-foot screws hydraulically driven into the bottom, as well as chain through a giant concrete block, the moorings weren’t going anywhere.

We also found a nice spot in Egmont Bay, right next door. Tied up against a wall of mangroves, we would be safe from the anticipated high winds. However, this option looked less and less appetizing, as in the days preceding the storm we watched more and more boats cram themselves into the bay. This seemed extremely foolish to us. The main danger would not be the high winds, but the notoriously poor holding in Egmont Bay. If even one boat broke loose, it would pin-ball around the harbor, cause considerable damage, and potentially break other boats loose as well. When it comes to storms in crowded bays, “safety in numbers” is a myth.

As Matthew approached, he began to swing to the north of us. The marina allowed us to stay in our slip, so we stayed. On September 27th, Matthew officially missed us. Despite all of our preparation, the worst we had to endure were two days of rain and squalls. The highest wind speed that we recorded was a good stiff breeze of 40 knots. Not enough to damage anything, but enough to make it very uncomfortable in our slip. We got a break from school, and played dominoes all day up at the restaurant. So all in all, Matthew was a bit of an anti-climax for us in Grenada. However, the same cannot be said for the rest of the Caribbean.

Soon after Matthew passed us, he underwent a drastic transformation. In only two days’ time, he rapidly became a full-fledged hurricane, and then a category 5 monstrosity with 160 mile-an-hour wind speeds, and an appetite for destruction. We watched, over the course of the week, as he plowed northward through the Caribbean. On October 4th, he made landfall in Haiti, with predictable results. Entire towns were wiped off the map, and transport and communication was disrupted throughout the region. Somewhere between 546 and 1332 people were killed, and thousands more left homeless. Later the same day, he also made landfall in eastern Cuba, wreaking more havoc. Matthew then proceeded northward through the Bahamas, causing well over $200 million in damage, and wrecking hundreds of buildings.

As if he hadn’t caused enough destruction already, Matthew headed towards Florida the next day. He swept up the east coast of the United States, causing widespread flooding and power outages. Most of his energy spent, Matthew, now a category 1, made one last tour, brushing Virginia and the Carolinas, before disintegrating off of Cape Hatteras on October 9th. During his stay in the U.S., Matthew caused $4-6 billion in economic losses; as well as the death of 46 people, one of which was the result of a heart attack where emergency services had closed down. This is in stark contrast to the huge loss of life in Haiti, and comparatively low monetary loss (close to $1 billion). All told, Matthew was around for only 17 days, but in that time, he caused $6.9 billion in damage, and killed over 1380 people, while leaving hundreds of thousands more homeless. Matthew has been dissipated for over a week, but in his wake remains a “tropical depression.”