Our family had a few hundred dollars’ worth of ‘Fun Money’ (Christmas money donated by generous relatives for the creation of memories rather than the purchase of stuff) burning a hole in our pockets, and we decided that it would be best used to take a three-day trip to Cartagena, Colombia. To say the least, I was not completely psyched about this new proposition. Not at all. In fact, I was not even remotely psyched (even though, as we shall see, it turned out well). It seemed to me to be one of Mom’s hair-brained schemes that by some unhappy twist of fate made it past the planning stages. It looked suspiciously like an attempt to broaden our horizons, and I wanted nothing to do with it.

Despite my loudly-voiced misgivings, Mom and Dad purchased bus tickets to Cartagena and back, but failed to decide which of two rental houses we wanted. When, on the morning of our departure they did finally decide on a house, we discovered that it might take up to 24 hours to validate the booking. After a few tense hours of talking Spanglish on the phone with various help-desk agents, they finally got the booking issue sorted out. Only when I was sure that we were actually going did I pack. We all double-checked our stuff, went to the bathroom one or two last times, and went up to the curb at 12 to wait for a bus that might not arrive until 1. The bus eventually arrived, and we all settled in for the 5-hour ride to Cartagena.

It was much like an airplane ride, only on the ground. Thankfully, the bus had a competent air conditioner, not one of those second-rate clunkers that occasionally farts out lukewarm air every few minutes that one comes to expect in third-world countries. We read books, looked out the window at the Colombian landscape, and stared down the other passengers. Aaron, Sam, and I grabbed the three back seats, and watched Iron Man 2, on a computer that we had brought for that very purpose. When the movie ended, we still had a few hours to go, so we read our books for the remainder of the journey. 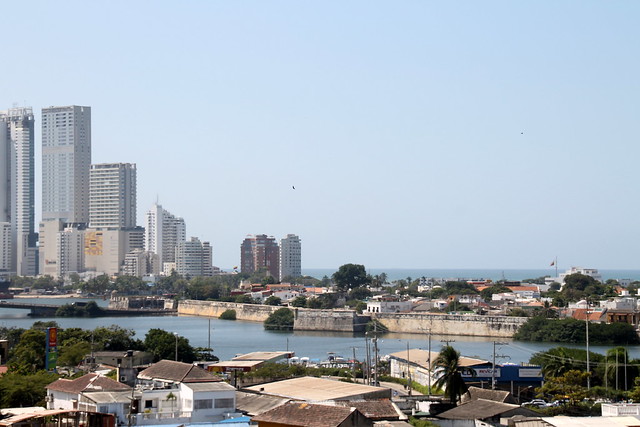 The supposedly 5-hour ride turned out to be only about 4 hours (Sarah timed it), but it was getting dark when we arrived in Cartagena. Cartagena is a large, modern city full of skyscrapers, taxis, and parking garages. However, the part that concerns us was the old walled city. This is full of small shops, restaurants, and four-hundred-year-old houses that overhang the narrow streets. Because we had not decided on a house when we bought the bus tickets, the driver didn’t know where to drop us off. So, we and all our luggage were dumped somewhere near the clock tower, without a clue in which direction our house lay. So, we wandered around the crowded streets of Cartagena for an hour, searching for our elusive house. We eventually found it, with the help of a friendly local. We got the key from the restaurant on the ground floor, opened the door, went up the stairs, and took a look at our new digs. 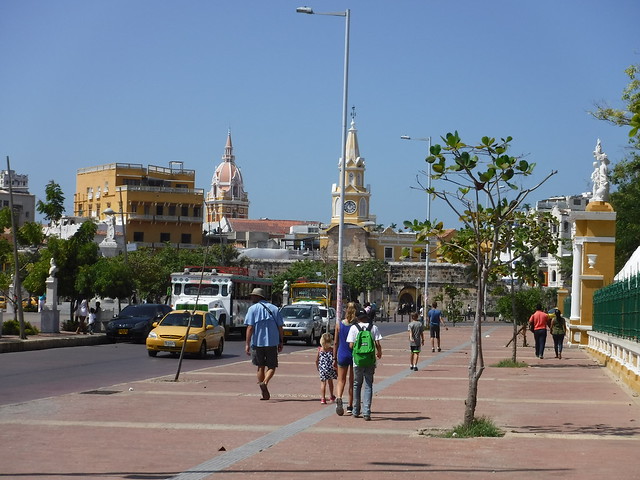 They were nice. Real nice. The house was huge, with four bedrooms with three beds each, four bathrooms, and a pool (without any water). It had a balcony overlooking the street in a quaint, historic neighborhood. We chose bedrooms, dumped our stuff, and headed back out the door in search of dinner. We went down the street toward the plaza, and sat down at one of the many restaurants lining the avenue. Our table was outside, in the middle of the street, which only hours before had been clogged with taxis, motorcycles, and delivery trucks. There were no cars, but plenty of foot traffic. Street vendors carrying boxes of homemade jewelry, art, or cigars walked up and down, hawking their wares to restaurant patrons who had unsuspectingly taken seats outside. As we waited for our food, ate our dinner, and waited for the check, we were approached by at least 6 different guys, all with something to offer. One crew of jewelry salesmen was particularly persistent, coming repeatedly to our table and telling us, in no-doubt very eloquent Spanish, just why we needed their black coral necklaces, pearl bracelets, etc. 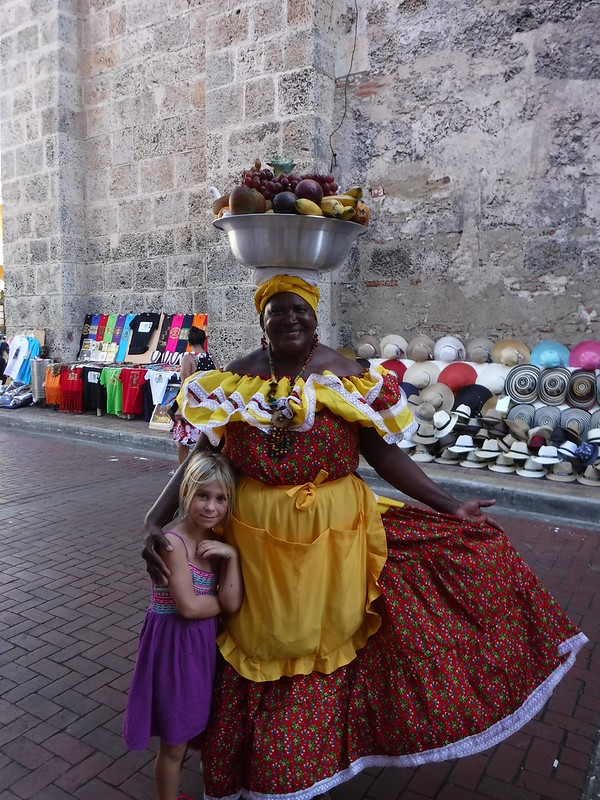 There was also a wide variety of street performers. We witnessed guys with acoustic guitars that would ride up to your table on rusty bicycles, and start playing, guys that walked around with a boom box and mic, and sang you a personalized rap song, and even a Michael Jackson impersonator. He was good, too. However, we soon became acutely aware that the entertainment wasn’t free–even more so because Mom happens to be somewhat overgenerous, if there is such a thing. We also saw a gang of break-dancers in action, which as kind of cool, because I always thought that break-dancing was something that happened in large northern cities in the 1980’s. Even though their performance wasn’t exactly free either, I think whatever money we parted with was well-deserved. 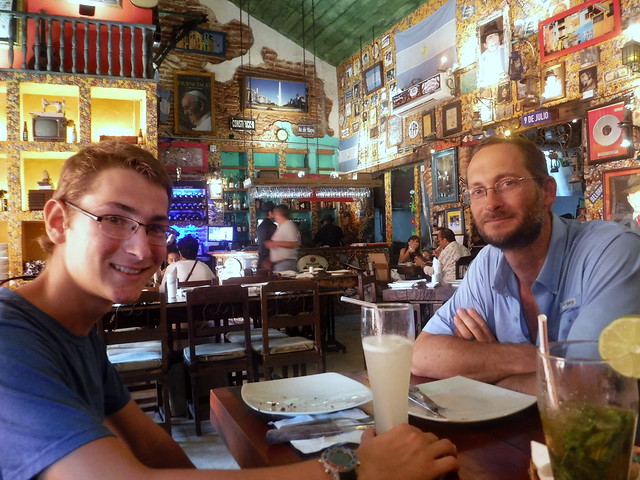 Mom claimed (repeatedly) that for her whole life, she had wanted to go to Cartagena. She did not specify exactly why this was so, or what she expected us to accomplish while we were there, but…Whatever. Moms. She seemed content to spend our time eating out at local restaurants, walking around the walls, and generally hanging out and getting to know the place. Surprisingly enough, we were only dragged into one museum. This happened to be the ‘Museum of the Spanish Inquisition and History of Cartagena’, elected by unanimous vote because it supposedly contained several instruments of torture. While the torture devices were a little disappointing, our tour guide was very helpful in explaining some of Cartagena’s history.

One day, we took a walk outside the walls of the old city to the nearby Castillo de san Felipe, a large fortification that overshadows the eastern entrance. We spent the first half of the day walking around the fort, watching an animated history video (in Spanish), and running through the maze of arched tunnels that wound under the battlements. 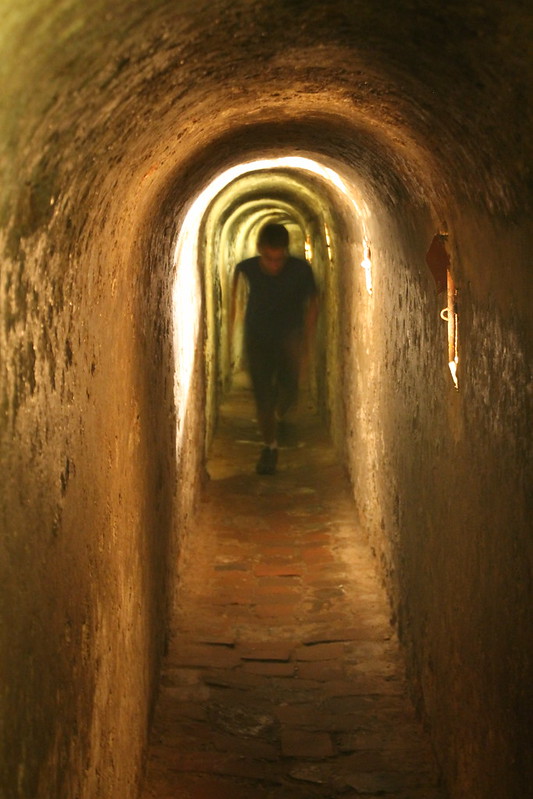 So, what did we do when we weren’t traipsing all over the city? We mostly spent our time lounging around the rental house. We often engaged in raucous pillow fights, just because we had the space. Aaron had somehow crammed Settlers of Catan in his backpack, and we played that once while Mom and Dad went out for a dinner date in an old convent-turned-fancy-restaurant.

On the last full day that we were there, we found a small chocolate shop/museum a few blocks away, and Mom secured ‘chocolate workshop’ sessions for five of us, Rachel, oddly enough, electing to forgo this great opportunity to consume chocolate and hang out with Dad instead. We learned all about the history and cultivation of cacao, the transformation of the purplish seeds of the tropical fruit into the silky brown substance familiar to chocolate-lovers everywhere, the preparation of a traditional native beverage (unsweetened and spiced with chili peppers), and, lastly, how to make our own confectionery delights, some of which survived long enough take home for later consumption. 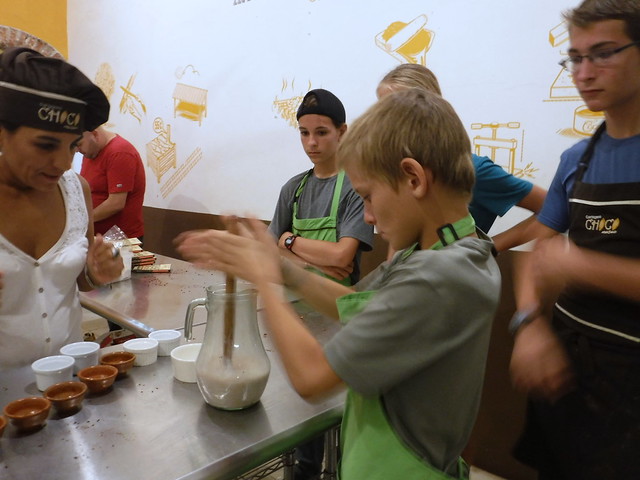 To say the least, our departure the next day was a bit harried. The geniuses among us had packed the previous day, but there is always a last-minute scramble as people hunt down their various odds and ends and try to get out the door. We were told to be at the bus station at three o’clock to catch the bus, which might not arrive for another hour. Between going out for breakfast, packing up, tidying the house, and getting sandwiches-to-go, our morning soon disappeared, leaving us only fifteen minutes to make the twenty-five-minute walk to the bus station. We must have looked hilarious to the other pedestrians, overloaded and dragging a whiny five-year-old, as we sped past, leaving a dust cloud that lingered in the afternoon heat. But when the man at the ticket counter in a foreign country tells you to be at the bus station at a certain time, you be there, even if the bus is late. A classic case of hurry up and wait. 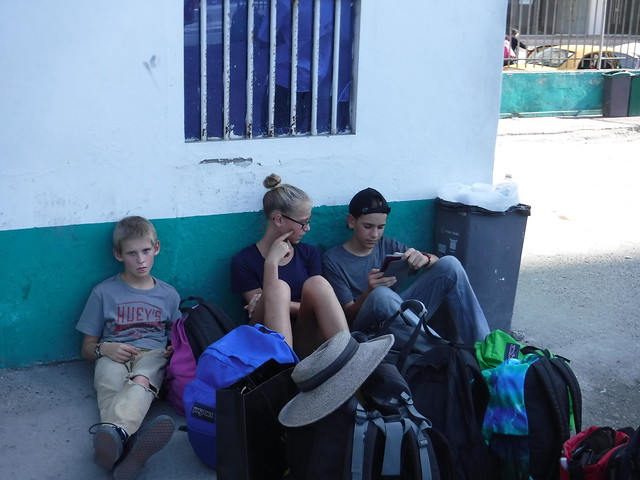 The ride home to Santa Marta was much like the ride there, only slightly longer. It was very late when we staggered through the front door, ate a few sandwiches, and collapsed in our beds. Though I had been very skeptical of the whole operation in the beginning, the trip to Cartagena turned out to be a great experience, and an excellent use of the Christmas money. To those who helped fund our Cartagena Vacation, thank you.