I thought that this blog was going to be about the indigenous tribes of Panama, but I have discovered in the writing of it that a much larger topic lies beneath.

One of the reasons we left our suburban neighborhood to take our kids traveling was to show them how other people live. We wanted them to learn to speak another language and to become “well rounded.” We did not want them to take their place in the world—born into a relatively wealthy, well-educated family—for granted, but to appreciate every gift, and learn how to share those gifts someday as adults. This sounds like a noble goal, but in the midst of accomplishing it, we are having to rethink our preconceived notions of “wealth” and “education.”

Allow me to illustrate: in the San Blas islands of Panama live the Guna Yala people, an indigenous tribe which numbered in the hundreds of thousands before the conquistadors arrived, and now consist of about 50,000 people, spread over an area which encompasses about a quarter of Panama. They are self-governing, and have their own language. They make a living by fishing, sewing molas (beautifully sewn handicrafts), and growing coconuts. 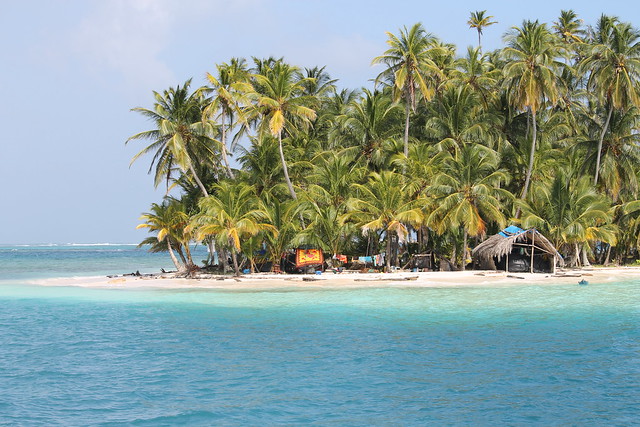 Recently, tourism has become another source of income, and one can see pangas with outboard motors zooming from place to place picking up and dropping off visitors from the mainland (now connected to Cartí by road). Obviously, this brush with the “civilized world” has changed their way of life—instead of paddling ulus, some Gunas have motors, and instead of meeting in the hut for a daily congreso, many have televisions.  Nearly everyone has a cell phone, so the outside world comes streaming in. The islands and surrounding waters are littered with plastic garbage from packages of imported food and drinks. Now, I don’t intend to invoke the myth of the Noble Savage, but in conversations with Gunas and with our kids, we are learning that as the Guna gain what we might consider “wealth,” they are losing their traditional culture, and as they become “educated” in government-run schools, they are losing the knowledge of how to live off the land. One might argue that these trade-offs do not really enrich their lives. 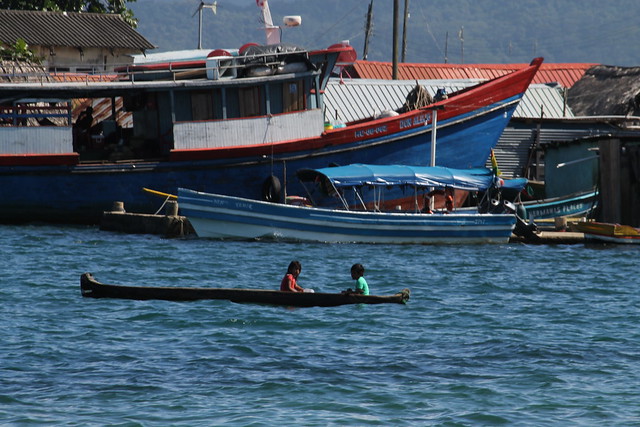 This is the dilemma of development everywhere. In the eastern Caribbean, islands with cruise ship ports have thriving seaside quays with jewelry shops, souvenir stands, restaurants, casinos, and clothing stores. Of course, the locals may not actually shop in the places where they work, but still, tourism is big business and brings a lot of money to the islands that in years past survived on subsistence farming, exporting sugar and tropical fruit, and rum, fishing, and harvesting salt. But with the influx of money comes an increase in pickpockets, drug dealers, swindlers, and beggars, too.

We spent a season at Red Frog Marina in Bocas Del Toro, Panama. Nowhere was the gap between Have and Have Not more readily apparent: multi-million dollar yachts moored a hundred yards from mangrove huts where the indigenous Ngöbe-Bugle cooked over open fires. It is easy to look at the externals and say that the owner of the mega-yacht, because he has a generator and a washer/dryer is “rich” and the man in the hut “poor” because his clothes are hanging on a line between two trees, but that’s a very simplistic view of human life, and demonstrates how we often confuse “money” with “wealth.” Unfortunately, the attractiveness of this sleek lifestyle changes the way the native views himself, and perhaps this is the greatest loss.

Two young Gunas came by selling molas the other day. They differed significantly from the older Guna ladies I had met, most of whom wear traditional clothes, gold nose-rings, short hair, and beads wrapped in wide bands with intricate patterns around their wrists and ankles. A girl in her late teens, with long hair and chipped nail polish came with her brother, her driver and translator (from Guna to Spanish). They wished us a Merry Christmas and wanted to know about our traditions (and also if we would be buying gifts…) and I explained that we had traded our house-full of stuff for a simpler life on a boat, and we do not participate in Christmas or buy gifts because we choose to make memories instead. (Just that morning, when I had jokingly asked Jay what he got me for my birthday, he said, “an island paradise.”) I said we believed that relationships, not things, make people happy. He nodded vigorously and said he believed the same.

When I asked whether the next generation of Gunas was keeping the traditions of their elders, he said he is teaching his two young sons to free-dive and to fish, and the girls in his family are still learning to sew. Otherwise, he asked, how would they make a living someday? But he also admitted that with the influx of media and with the building of schools, things had changed. Electronic entertainment has replaced storytelling and singing, and young children that used to go into the mountains to tend farms with their parents now go to school, and food is brought in by boat from Colombia and by road from Panama City. He said that the Guna often eat canned tuna instead of fresh-caught fish! 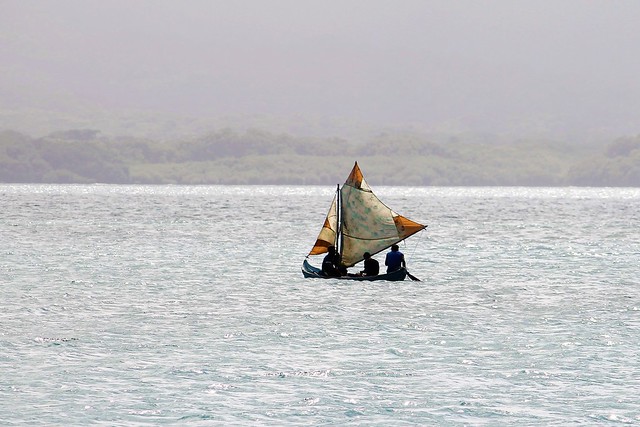 During some particularly heavy wind (which makes paddling ulus island-to-island impossible), I was visited repeatedly by Morales, a Guna lady who tried to sell me the same molas and beads every day. I usually offered her a cold drink and a chance to rest in my shady cockpit, and she told me over the course of several days that she and her husband were raising their two grandchildren because their parents had died and between fishing and selling molas, they provided food and clothes for the four of them, but that things were difficult when she couldn’t get out to sell, or when her husband couldn’t find fish. The grandson had a medical emergency and had to go to the hospital, which complicated matters. She never begged for money outright, but always asked me to buy something. When we made gifts of some school supplies, kids’ clothes, and used snorkel gear, she offered me something in exchange. We had no way of knowing whether her story was true or not, but we helped her as much as we felt we should. 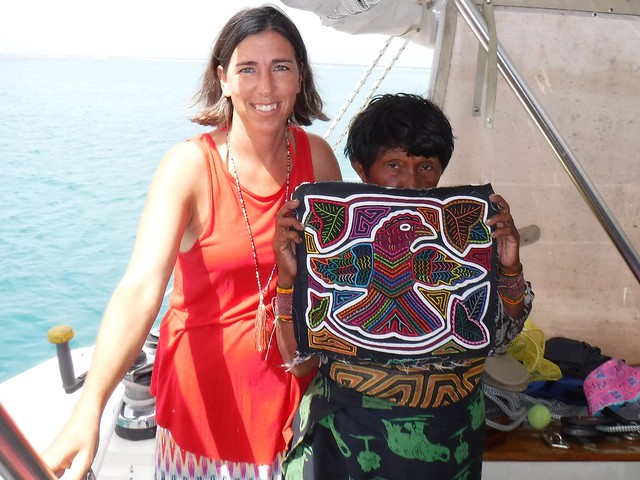 This raised many a dinner-time conversation about giving. When should a person share what they have? What are the motives of the person asking for help and the person deciding whether to help or not? When is giving money or material things not helpful? We could think of many examples where tourists giving handouts to locals creates more problems than it solves. We recounted instances in the last year or two when we had unknowingly contributed to a problem by “helping” someone, and other instances when it would have been wrong not to help.

Sometimes helping involves more than a handout. I took over my friend Shirlene’s English classes at a Ngöbe village school this past summer when she and her family went back to the United States for a visit. Eli and Sam each came with me a few times to help out. That kind of giving—of time and energy, seems to satisfy a need without creating a negative cycle, and often results in the giver receiving a blessing as well. Another strategy is to trade instead of giving things away, helping to retain the dignity of the receiver and not contributing to the economy of begging. We also donate things like school supplies and clothes to a local charity or church, because they usually better understand the need in the community. 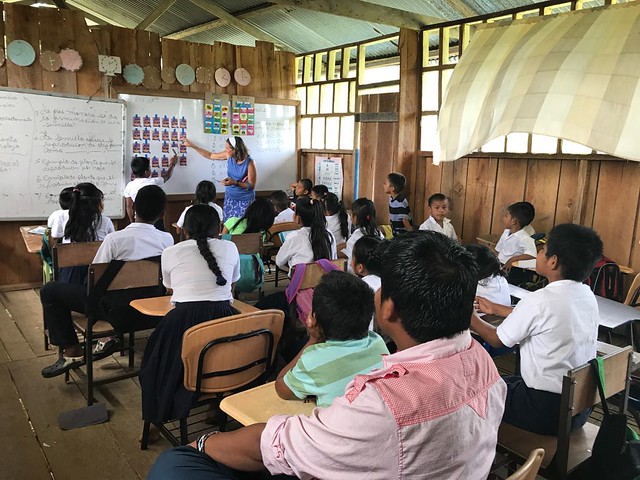 I knew we would see poverty as well as wealth in our travels, and that they would often be juxtaposed, but I didn’t realize how we would be confronted almost daily with the dilemma about whether and how to help a “poor” person who sees us as wealthy patrons. Discerning what the “haves” should or should not do for the “have-nots” is difficult—there is no formula, and humans are not always motivated by altruism; they often act out of guilt or pride or pity. As a result, some people simply refuse to participate, turning every needy person away without consideration for individual circumstances. Others give liberally without thinking of the consequences: generous to a fault.

We are looking for the happy medium: we recognize that though our boat feels like a modest dwelling to us, it represents a life of luxury to those we encounter. Furthermore, our faith in the ultimate Giver compels us to act with compassion toward fellow creatures. The scriptures by which we live are clear on giving: if I have two shirts, and my brother has none, I ought to give him my extra. We believe that “to whom much is given, much will be expected” and “religion that God our Father accepts as pure and faultless is this: to look after orphans and widows in their distress.” To love God is to show love to our fellow man.*

On the other hand, the kids say I have “sucker” written across my forehead, that I would listen to every “Sally Sob-story and Harry Hard-luck” that makes an appeal. I bought limes and bananas (whether I needed them or not) up and down the Eastern Caribbean from every boat-boy who stopped by. I felt I was supporting the local economy in legal goods, but other people might argue that I’m taking business from the markets ashore, or raising the prices of produce, or even “feeding a stray dog” that will return again and again. I don’t know. 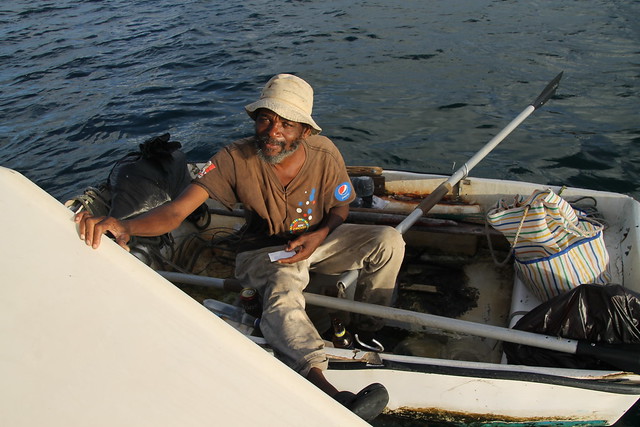 Furthermore, when someone does ask for help, I often have no way of knowing whether he or she is telling me the truth. I have opted to err on the side of compassion. A dishonest person will eventually suffer the consequences of his lies, but I will also be held accountable for whether I cared for my neighbor. I guess I would rather be foolhardy than hard-hearted.

Life was much easier in suburbia. We belonged to a church, we gave regularly, and we seldom encountered abject poverty and desperation. I once heard a fellow sailor say that he was tired of traveling to third-world countries because “poverty looks the same everywhere,” but now that I have seen it, I have to say that it isn’t true. Yes, a blue tarp constitutes a “roof” in many places, but beneath that roof, the people are individuals, with thoughts and feelings and needs. How to meet those needs is a complex question, and though we can’t help every poor person in the world, when someone crosses our path in a place of need, we owe it to him as a fellow human to listen to his story with an open mind, and to treat him the way we would want to be treated.