We had expected anchoring to be more difficult in the Bahamas.  We’d heard about poor holding in hard bottom scoured by current, and the need to use two anchors in a “Bahamian Moor” to prevent breaking one out of its set with every reversal of the current.  After dropping the anchor 36 times over the last 2 months, we don’t see what the big deal is. 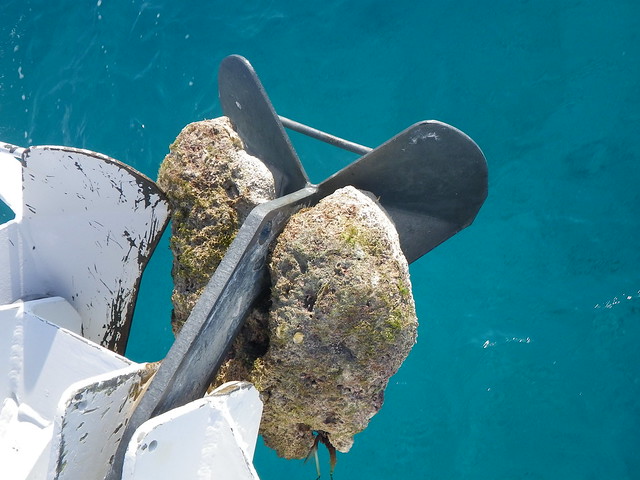 We’ve never needed to use two anchors.  Maybe we’re not going to the right places, but if the chart says “strong current”, “surge”, or “poor holding” we don’t go there.  We have seen one place where boats were using two anchors: the Norman’s Cay cut.  We looked at the cut, looked at the boats anchored there, looked at the forecast, and went somewhere else.

Our primary anchor is a 44# Delta.  For the most part we drop it and forget it.  We try to hit sand, and usually can see a cloudy spot where it lands.  We don’t back down on it, we don’t dive on it.  Sometimes I’ll go look at it with a glass-bottomed bucket, but that is rare.  Knocking on wood, we’ve never had a problem.  Sometimes it comes up clogged with weeds or rock, and sometimes a wind shift breaks it out and it has to reset.  But we’ve never had to re-anchor.

I don’t mean to sound flippant.  I’ve spent plenty of time worrying about my anchor, and many nights curled up with a portable GPS, getting up every hour to check the wind.  We’ve just never had a problem with our anchor holding.

We’ve come across two cases that make anchoring a little bit challenging: close quarters and high winds.  It takes a little practice to figure out where to drop the anchor to make the boat lay where you want it.  This is especially challenging when you’re trying to find shelter, the wind is forecasted to shift, and you want to make sure you remain sheltered without swinging into anything.  Sometimes I’ve ended up a little closer to the rocks after the shift than I planned to be.

When anchoring we let the boat come to a complete stop pointed into the wind before we drop, then we let her fall back as we pay out the chain.  We try to tie on our bridle quickly before the chain comes up short to prevent shock loads on the chain, windlass, and crossbeam.  This gets tricky when it is blowing since the boat is difficult to control when it isn’t moving forward.  We often use the engines to keep from falling back too fast or the bow getting blown off to one side, but it doesn’t always work.  If it were a big problem we could drop the anchor while still moving forward and use a hook for the bridle instead of tying it on.  The hooks aren’t as strong as the chain or are prone to falling off, so we prefer to tie them.

The adverse waves we've complained about before continue to be a mystery.  We've been anchored in this particular part of Elizabeth Harbour for about a week now, and a few days ago we had mystery waves.  The wind had not recently changed directions or strength, we were miles from any cut that would admit surge, and yet soon after the sun went down we started getting waves on our beam.  They are irritating and frustrating because we don't know what causes them, and therefore how to avoid them.  By the time they show up, it is always too late to do anything about it.

All in all, in our experience, anchoring difficulties in the Bahamas are over-rated.  We carry four (not counting dinghy anchors), but one always does the job.  If I had to buy a new anchor today, I might consider a Rocna, but they’re so expensive.  I’m more likely just to stay with Delta, though I’d probably move up to a 55 pounder.