My friend Ken will be so disappointed in me.

Ken and his family are out on the water almost every day.  In the summer they're catching lobster and spearfishing, in the winter they go crabbing, and they're fishing all the time in between.  When we were planning to cross the Gulf Stream, Ken gave me a lure and told me how to use it.  My track record for fishing at that point wasn’t so good.  Lots of money spent on gear, but not much time getting it wet, and mostly catfish and barracuda to show for it.  But with visions of tuna and mahi mahi I gratefully took the lure.  We were in the Gulf Stream for about 12 daylight hours.  Did I put the lure in the water?  No, I did not.

It was the same story between the Abacos and Eleuthera. I did put Ken’s lure in the water on the banks between Eleuthera and the Exumas.  It yielded a very nice snapper, followed by two very angry barracuda, the last of which bit through the wire leader and stole the hook. 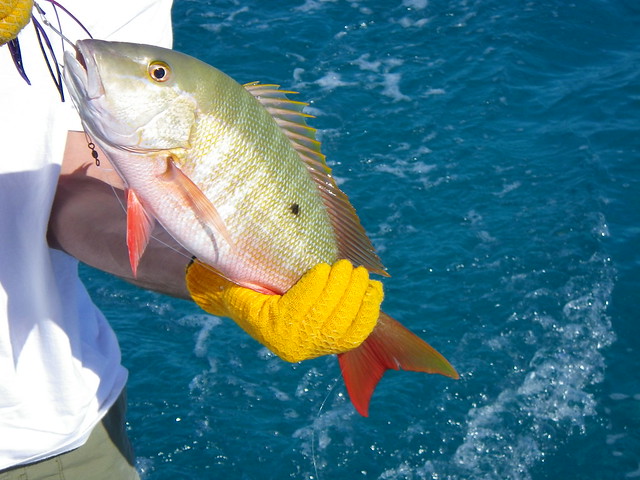 We went offshore a third time between Big Farmer’s Cay and Elizabeth Harbor.  I put a new hook on the lure, but once again, didn’t feel like putting it in the water.  A boat making the same trip alongside us caught four mahi-mahi on hand lines.  If they were in the fish, so were we.

It isn’t just fishing.  I have a new pole spear that has never tasted blood, and I haven’t bagged any lobster since the last time we went out with Ken.  Technically cruisers aren’t allowed to take conch in the Bahamas, but they were never in much danger from me anyway.

I’m not proud of any of this, and I hope to improve.  We expect that fish will eventually make up a large portion of the meat in our diet.  What we’ve seen available in the stores tends to confirm those suspicions.  Have you ever seen a Bahamian cow?  I haven’t had a good steak since my dad brought some in before Christmas.

Once the fish is cleaned, we can do it justice.  Another boat donated a big hunk of tuna to us.  We marinated it in lemon, soy, sesame, ginger, and garlic, then pan seared it and ate it rare.  Oh, it was good.

It would probably help if we started the trip with a cooler full of ice and could just throw the fish in without having to worry about cleaning it right away.  Hand lines are also probably better for hauling in a fish than reeling in 100 yards of fishing line.  But until I take a more relaxed view of our passages rather than being focused on VMGs and ETAs, I'll probaby never want to fish.

We have three more bodies of deep water to cross before we return to Florida, so I still have an opportunity to redeem myself with a big fish.  I’m not holding my breath.