On the morning of August 3, 1997, Jay and I left the Miami airport for our honeymoon in Mexico. That afternoon, unbeknownst to us, across the Caribbean Sea, a disaster was unfolding on the small volcanic island of Montserrat. Positioned between Nevis to the north and Guadeloupe to the south, it was a vacation paradise, a place where famous musicians like Eric Clapton and Paul McCartney came to record music and relax. It had a picturesque seaside capital. It had 15,000 inhabitants, a medical school, bustling businesses, and farms that exported tropical produce. It also had an awakening giant. 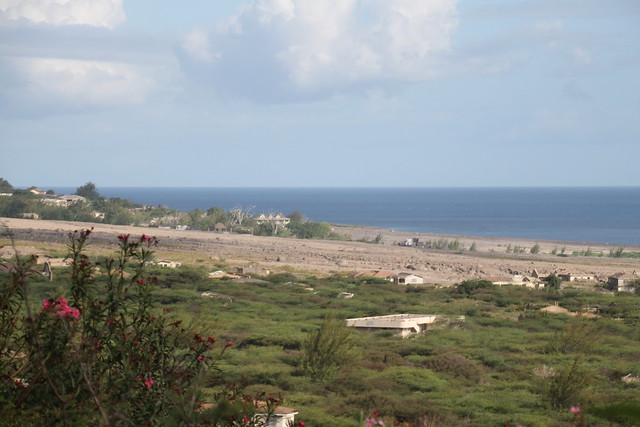 Standing on the hillside above the exclusion zone, it is hard to imagine what Plymouth looked like before the Soufriere Hills volcano eruptions. What little is left between the scars of pyroclastic flow and lahar is buried waist-deep in ash. The skeletal remains of buildings can be seen above the surface of the wasteland, and the hillsides around the old capital are covered in houses slowly rotting as nature takes over in danger zones that were evacuated after a series of eruptions, the most recent in 2010. A hardened crust of new earth fills in the gap where a half-moon beach once curved along the southwestern side of Montserrat. Today the mountain resembles a sleeping dragon with smoke slowly curling from its nostrils and an acrid haze creeping down its back. 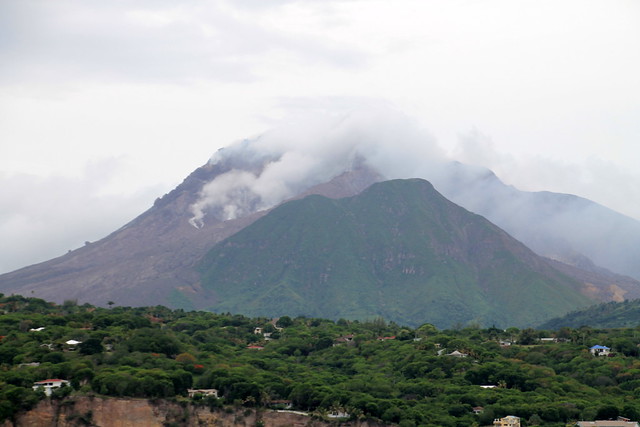 Still standing, like lone sentinels, are two sugar mills from plantation days, reminiscent of the faros of Sardinia, ancient stone markers of a history slowly being effaced by powerful erosive and, ironically, creative, forces. A hotel stands on the outskirts, its pool filled with ash and lush growth, only the tiles and a ladder to remind one what it once was. The lobby of the hotel is filled with ash as well, and the roof is caving in, its supports rusting in the sulfurous rain and wind. 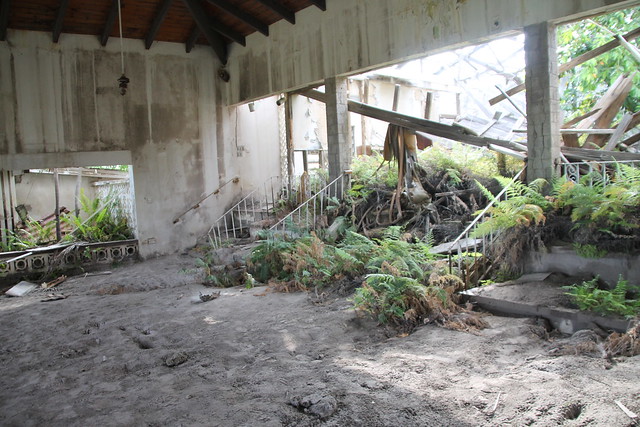 Beside us stand two men who look with different eyes—eyes that remember what this place once was. “Here is the dining room,” says Moose, our taxi driver and tour guide. “This was a very popular spot. They used to have barbecues on the weekends.” Cecil had a successful business (he is still a master leather-worker), but now they make a living taking visitors like us on taxi-tours into the zones surrounding the volcano’s exclusion zone, or selling burgers and beers to people who take a day to explore the island. As much as we would like to gawk at this act of God close-up, the two men remind us of the unseen dangers. Entire houses were buried under the pyroclastic flow, and the roofs have dissolved, leaving a crust of ash one might fall through if he went snooping. There are also hefty fines for entering Plymouth, the old capital. 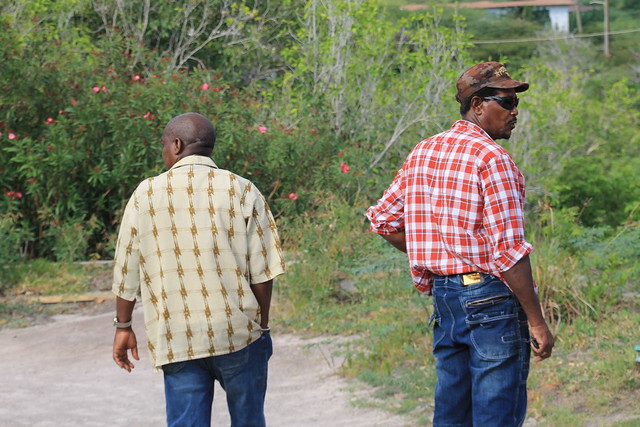 Moose has to drive by his old place every time he takes people to this side of the island. He doesn’t say anything at the time, but later he talks about what if feels like to see his building. It was built to replace his original business in the old city. At the time, the volcano was quiet, and the exclusion zone was small. He was set to open on a Friday, but Wednesday, there was a government announcement, redrawing the lines to protect people, and his property was inside that new line. The village he grew up in no longer exists, wiped off the face of the earth by the volcanic eruptions. To talk to Moose or Cecil, you wouldn’t be able to tell that they are sad about these losses. Moose says the words “positive” and “no problem” so often that I begin to believe them. These are people who lost everything—sometimes twice—and did not flee the island. They continue to rebuild, to smile, and to welcome visitors. It made me feel insensitive to take pictures of their ruined city, but there is another way to look at the situation: if life hands you lemons, you make lemonade. And that is just what Montserrat is trying to do. “We cannot focus on the past,” insists Moose. “We must look to the future.”

That’s a difficult task for an island that lost two-thirds of its usable land to a volcano, ten thousand inhabitants who resettled elsewhere (mostly England and other Caribbean islands), its capital and both the agricultural and tourism segments of its economy, all virtually overnight. Only 19 people died in the eruptions, but the island lost a whole generation; as schools closed or became temporary shelters, families with children left the island to find jobs and stability elsewhere.

But the phoenix rises: Moose has a new restaurant, not far from the government dock where visitors check in with customs and immigration. Cecil pointed out places where the government is preparing to build geothermal power stations. A group of caring recording artists (including such names as Elton John, Sting, Phil Collins, and Mark Knopfler) held a benefit concert in England and the proceeds built a new cultural center, where their handprints, cast in bronze, are on display. A new town is being built in a part of the island that used to be wilderness, and boats are coming back to visit, anchoring in Little Bay to the northwest. And a big draw for the island is the volcano that both put it on and took it off the map. 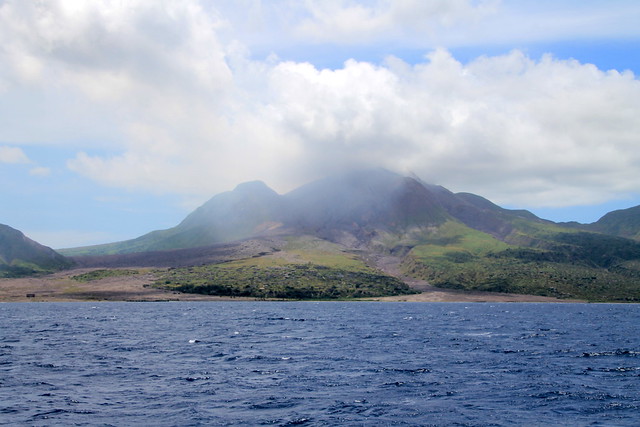 First stop on the tour is the MVO—Montserrat Volcano Observatory. Here, the volcano is closely watched by scientists, and anyone interested is educated. Every six months, vulcanologists from around the world meet here to discuss the state of volcanic activity and consult with local officials. At a meeting in 2010, the scientists were met with an ash plume as the dozing giant awakened again. Seismographs monitor activity in the earth, and GPS is used to show any subtle changes that may be taking place as the earth expands or contracts over the hot spot beneath the island. The before-and-after photographs on the walls of the MVO leave one breathless and wordless. The only thing more remarkable is seeing the devastation firsthand. 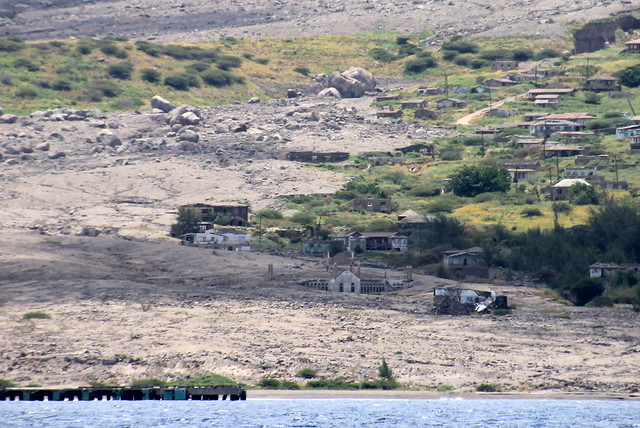 On Statia, one can hike into an extinct volcano, and on Nevis, one can bathe in springs heated by geothermal vents, but Montserrat has a living, breathing volcano, and it is a sight to behold. The island is often overlooked, written off since the disaster, but visitors have both something to offer and to learn. While tourist dollars help rebuild the island and a view of the exclusion zone reveals the destructive power of nature, talking to the locals uncovers an even more amazing phenomenon: the power of a positive attitude.