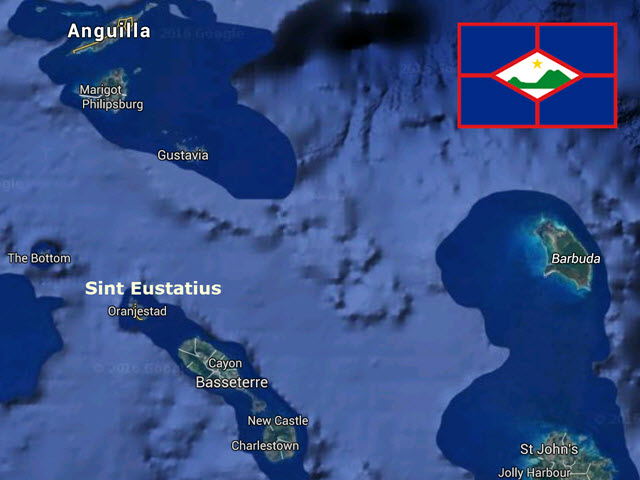 Capital: Oranjestad
People/Customs: The approximate population on St. Eustatia is around 1200, largely descendants of slaves that worked on the plantations here. The metric system is used on St. Eustatia.
Language: Dutch is the official language, but English is most commonly spoken.
Climate: In January the average daily temperature is around 85°, while in July the average daily temperature is 90°. Hurricane season is June to December.
Food/Farming: Tropical fruits grown here include breadfruit, guava, mango, papaya, passionfruit, pineapple, soursop, plantain, starfruit, and tamarind.
Government: Statia is a part of the Dutch Kingdom and one of the 5 islands in the Caribbean Netherlands (formerly the Netherlands Antilles).
Currency: the Eastern Caribbean Dollar (about $2.7 U.S)
Art/Music/Culture: Public holidays on Statia are New Year’s day, Good Friday, Easter Sunday, Easter Monday, Queen’s Day, Labor Day, Ascension Thursday, Christmas Day, Boxing Day.

When Columbus found the island the natives called “Alo” (meaning cashew) he named it after St. Anastasia. The first permanent settlement was made by the Dutch in 1636, but the Dutch, French, and British traded control of the island 22 times. Statia is currently in Dutch possession. In the 18th century the duty-free port became a major trade center between Europe and America, exporting and importing molasses, slaves, supplies for colonies, and weapons. By the 1770s it was the busiest port in the world for legal and illegal cargoes, and an estimated 300 ships passed through the port per month. Statia recognized the newly created United States by shipping war supplies and returning cannon salutes. The British, angered by this alliance, retaliated by launching a naval attack on Statia that effectively ended its trade dominance. Today, St. Eustatius’ economy is based on fishing, small business, tourism, and oil storage and shipment. Though it is no longer “The Golden Rock of the Caribbean,” Statia’s natural beauty and rich history make it an interesting place to visit.

The vegetation here is mostly scrubby, with drought-resistant plants like the endemic Statia Morning Glory Vine. The slopes and crater of the Quill, an extinct ash volcano, offer a variety of plants such as orchids, elephant ears, bromeliads, bananas, and other rainforest species. There are reptiles such as the Antillean Iguana, Green Tree Lizard, and the Red-bellied Racer snake. Statia is a migratory bird stopover for over 100 species, and has year-round residents, like the Killy Killy (American Kestral), Antillean Crested Hummingbird, and the Bananaquit.