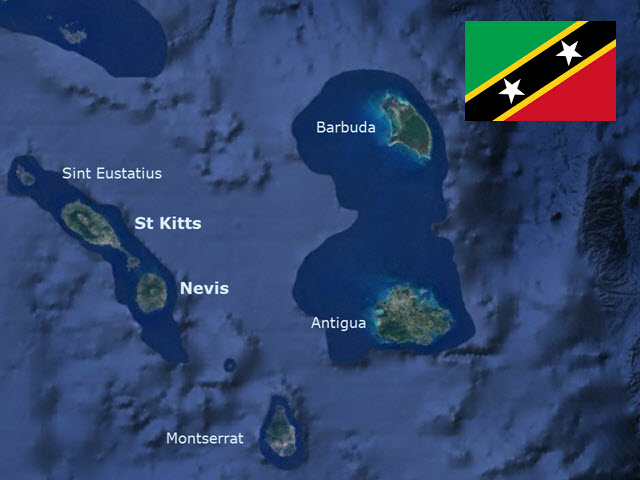 Capital: Basseterre, St. Kitts
People/Customs: The population on St. Kitts and Nevis combined is around 45,000, 90 percent of which are descendants of African slaves.
Language: English
Climate: In January the daily high temperature is 81°, and the low is around 72°. In July the average daily high is 86°, while the low averages 76°. Hurricane (rainy) season is June to November.
Food/Farming: Tropical fruits and vegetables as well as sugar cane are grown on the larger island of St. Kitts, but there is no sugar cane grown on Nevis anymore, only some fruits and vegetables for local use.
Government: The St. Kitts & Nevis Federation is an independent state in the British Commonwealth and is the smallest nation in the western hemisphere. It has a Governor-General, a National Assembly (legislature) and a Prime Minister. The economy relies heavily on tourism, but some local fruits and vegetables are grown.
Currency: East Caribbean Dollar.
Art/Music/Culture: The culture of this island is a mix European, African, and West Indian traditions. Most islanders are Anglican. St. Kitts has a popular dance troupe, the Masquerades.

The first British colony was established on St. Kitts (short for St. Christopher) in 1623 by Thomas Warner. France took over part of the island, and the British and French together exterminated all of the Carib tribes living there, before Britain ousted the French from their territory. The French repeatedly took control of the island, only to have it taken back again by the British until the 1783 Treaty of Paris declared St. Kitts and Nevis to be under British authority for good. During that time sugar plantations were very prosperous. In 1816 Britain attempted to link the British Virgin Islands, Anguilla, and St. Kitts and Nevis into one colony, calling it the West Indies Federation. The federation collapsed, and Britain tried to rebuild it without the Virgin Islands. Anguilla rebelled against the alliance and succeeded in retaining its connection with Great Britain, while St. Kitts and Nevis became a federated state inside the commonwealth.

Both islands are volcanic, with grassy coastlines and rainforest interiors. Nevis has hot springs, a freshwater spring that is heated by geothermal vents from the volcano. Nevis is famous for its monkeys, and St. Kitts is also populated with numerous goats and chickens. Tropical trees such as mango and cashew grow abundantly on the islands, as well as the bright orange “flamboyant” or flame tree.

St. Kitts is a populous island with many options for tourists, including hiking, taxi tours and an old British fort. It is a cruise ship port with a shopping district, water sports, and catamaran cruises. Nevis is quieter, with nice beaches, beach bars, and a few nice resorts. The first hotel in the Caribbean opened in Nevis in the 18th century, near the hot springs, which were reputed to be good for the health. The hotel, made of volcanic stone, now houses government offices, but one can still go and bathe in the hot springs, some of which reach 117°F. There are two museums in Nevis, one of which is the birthplace of American statesman Alexander Hamilton; the other is dedicated to Lord Horatio Nelson, whose wife, Fanny Nisbett, was the governor’s niece (her family’s sugar plantation is on the windward side of the island). Two of Nevis’ old sugar plantations were renovated and made into upscale hotels with restaurants and beautiful gardens. These sights can all be seen on a taxi tour of the island.