One of the reasons we stopped in Dominica, “the Nature Island,” was to do some hiking. We knew that Dominica had a boiling lake up in the volcanic mountains, and thought it sounded cool. However, it could only be reached by a steep 16-mile hike over rough terrain. Despite this, and the six-hour time limit, Mom, Aaron, Sarah, and I still wanted to go. Dad stayed home to work and keep an eye on Sam and Rachel, whose legs are too short for such a long hike.

Several days before, Mom had purchased a National Parks Pass, which was required to go hiking anywhere in Dominica. We also required a guide to help us navigate the somewhat-confusing paths, a driver to take us to the capital city of Roseau and up to the beginning of the hike, and an alarm clock to help us get up at 6 o’clock in the morning to start the day-long journey. I am typically a late-riser, so hauling my butt out of bed at such an early hour was tortuous. We then ate a quick breakfast and packed lunch, snacks, and water into three backpacks. We were then picked up and ferried ashore by a ‘boat boy’.

The boat boys are a gang of local men in small dinghies and paddle boards, armed to the teeth with fresh produce, and whose only purpose in life seems to be to cater to cruisers. They, among other things, brought fresh fruit to your boat, helped get you around town and plan expeditions, and also gave good river tours. They also served as a water taxi.

We were met at the dock by two local guys: our driver for the day, Anselm, and our trail guide, Francis. We got into the van, and took off. The drive to Roseau was a little over an hour long, and Anselm was apparently very comfortable at high speed, even on the twisty mountain roads. And all the while, Francis gave a running commentary on the history of the surrounding scenery.

The road ended where the hike began: at Titou Gorge. Titou Gorge is, well, a gorge. It sits right next to the beginning of the path, and the Trois Pitons River runs out of the mouth. Before it flows on down the valley, it forms a large shallow pool. Francis told us that it was possible to swim over a hundred feet back into the gorge to a waterfall, whose waters come from a fresh mountain lake several miles away. It sounded fun, even though the water was bitter cold and the average depth was 15 feet. After a short potty break, we hefted our packs, and set off after the guide into the jungle. 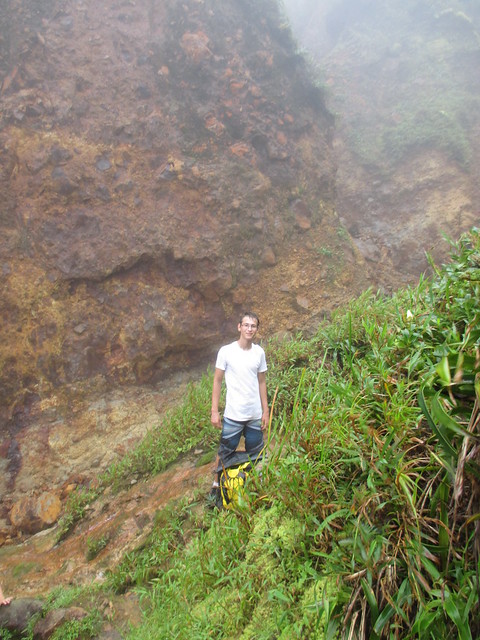 Each leg of the hike was entirely different. The first few miles were through lush, wet jungle. The slope was gentle, and water constantly dripped from the leafy canopy overhead, turning the dirt between the stair steps to mud. Everything was either green, like the leaves, or brown, like the mud. Occasionally, we had to cross cold mountain streams that ran across the path. We took the opportunity to refill our water bottles at a mountain spring bubbling out of the rock.

And then there were the stairs. More stairs than you can count. All up and down the mountains, somebody (or more likely several hundred somebodies) had secured split logs across the trail to form crude stair-steps. Francis assured us that the muddy and sometimes slippery steps were a considerable improvement over past years before the trail was maintained by the national parks system. Judging by the difficulty of some parts of hike, even with the stairs, the steeper areas must have been all but impassable.

The next part of the trek was much steeper. The trail wandered up the side of the second-tallest peak in the Morne Trois Pitons National Park, and so did we. Even on a nice day, the Pitons are usually blanketed in clouds, and this was not a nice day. As we hiked along a narrow ridge, I drew ahead of the others. Off to either side, the no-doubt astounding view was obscured by blowing clouds. Occasionally, as I took a short rest between flights of stairs, I could see snatches of another mountainside off to my left. The blowing mist had another effect: to fog up my glasses. Q: What do you get when you try and clean foggy glasses on a dirty shirt? A: Muddy glasses.

We took a break to eat some snacks at the top of the mountain (we assumed that it was the top of the mountain, because there were no more stairs leading up). Frances said that you could see the entire island from this vantage point, but all we could see was white, white, white. We were half way to the boiling lake, and we were a bit behind schedule. Francis had brought a thermos of ‘cocoa tea’, tea made from roasted cacao beans, sugar, and milk; in other words, home-made hot chocolate. He shared some with us.

Step three of the journey led us down the other side of the peak, and into the Valley of Desolation. It was very desolate. The rocks wore an odd mixture of colors, from white to yellow, and even green. As we carefully clambered down the rocky trail, we passed a cold spring, a hot spring, and a really hot spring. In several places, steam jetted out of invisible cracks in the rocks, adding to the freakishness of the landscape. 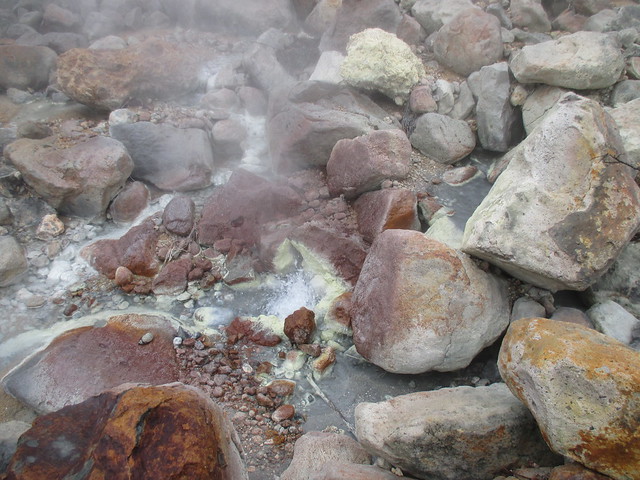 Francis found some white clay, and painted all of our faces (including his own) with intricate patterns. We spotted some lost French tourists that had apparently been too cheap to hire a guide. They asked Francis for directions to the Boiling Lake. Francis said that they could travel with us if they each paid him $50EC (about $20US). They grudgingly paid the bill, and we moved on. 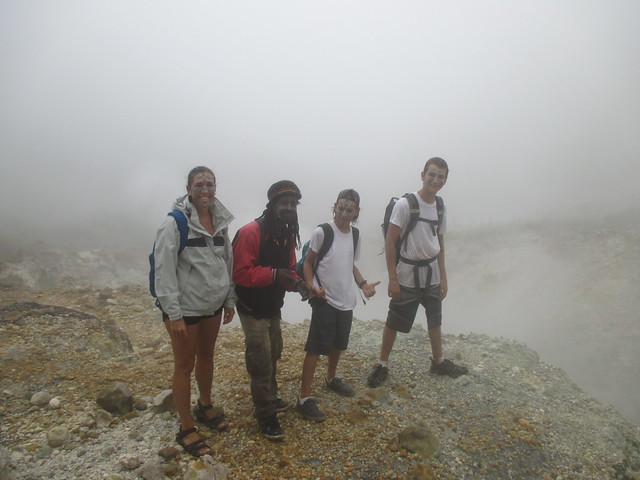 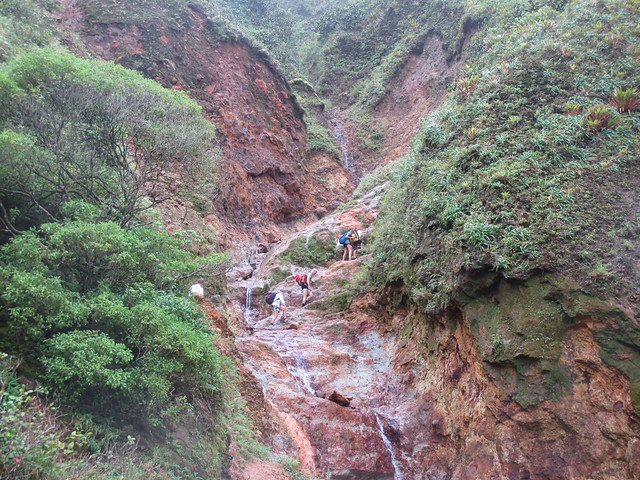 The next and last leg of the expedition was somewhere between a hike and a climb. We gasped our way up several flights of stairs through more jungle, and scrambled up short cliffs and across lukewarm rivers trying not to get any more water in our already-soggy hiking shoes. We also passed a series of warm waterfalls and pools that our guide said we would go swimming in on our way back. Sarah, Aaron, and I drew ahead of everyone else, and so, after climbing up one last hillside, we reached the boiling lake first.

We were standing at the top of a cliff, with mountain behind us, and boiling lake before us. We wearily set our packs down by a rock, and went over to the edge to finally glimpse our objective. We heard faint bubbling noises coming from below, but we could see absolutely nothing through thick layer of mist–or was that steam? Several minutes later, Mom and the French people caught up, with Francis bringing up the rear. We sat on some handy rocks and ate our lunches. Francis was just making himself a special cigarette with “all natural smoking weed” when a soft breeze wafted away the steam cloud, revealing the lake in all its glory. 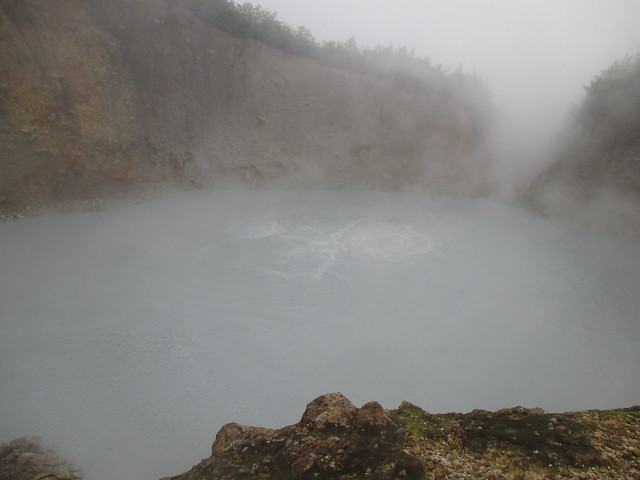 It was surrounded on all sides by cliffs, except where a small stream ran out. The lake was about a hundred feet across, and an eerie milky bluish-gray color. And it actually was boiling. Right in the middle of the lake, the water bubbled and frothed like a pot on a stove, and steam rose from the surface of the water. A couple from Martinique, who had reached the lake before us, asked Francis if it was possible to go swimming in it. Francis asked them if they were out of their minds. We stayed by the lake for almost 45 minutes, enjoying the view and eating the last of the snacks, but when the fog rolled back in, we shouldered our packs, and started the long way back. 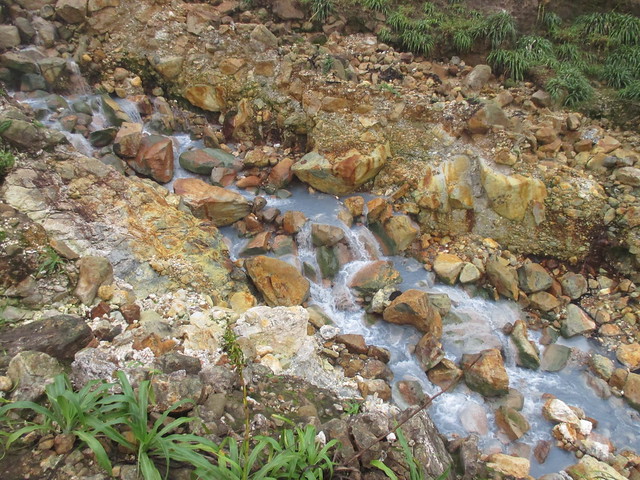 After about thirty minutes of steep jungle, we arrived at the hot waterfalls. We had been hiking in our bathing suits, so we just set down our packs, took off our muddy shoes, and climbed down into the pool at the base of the fall. It was so relaxing to sit in the warm rush of water cascading down the yellow rock after a long, damp hike. We washed off our war paint in the water, and generally enjoyed ourselves. But all good things must come to an end, and this was no exception. After ten minutes of sitting in the waterfall, we had to climb back out and put our shoes and packs back on, and get moving. And boy, was that wind cold.

The hike back through the Valley of Desolation was just as cool as the first time. If you listened closely, you could hear bubbling and boiling noises coming from underneath your feet. If the climb down from the peak was tough on the way down, the climb up was agonizing. Mom and the French people soon lagged far behind, with Francis staying with the stragglers. Aaron, Sarah and I waited up at the top for them, and when they eventually caught up, we started down. The trek through the jungle was longer than I remembered, but again, on the way up we weren’t extremely tired. About halfway down, it started to rain, but we didn’t mind. We stomped in the mud puddles that formed between the steps, trying to splash each other’s legs.

Tired, wet, and muddy, we eventually reached the bottom of the trail. We laid down our packs, and sat on a bench to wait for Mom and Francis. When they arrived, Mom joined us on the bench, and Francis went over to a small café. We went for a brisk swim in the ice-cold water of Titou Gorge, then we wearily lugged our packs for the last time the short distance to the van, where we were joined by Francis. I was so tired that I almost fell asleep on the way home, despite Anselm’s erratic driving. Back in Portsmouth, a boat boy ferried us back to Take Two. We were immediately accosted by the kids that had stayed home, asking all about our adventure. The day ended with warm showers, hot soup, and a good sleep.