Before heading into the Caribbean, we had never even heard of these two little islands. They are hundreds of miles from Colombia, which governs them, and the local population, being of English or African descent, bears very little resemblance to the Spanish or Mestizos of Latin America. But several sailors we met along the way told us not to miss them—Providencia especially, or as the English dubbed it, Divine Old Providence. We spent nearly a month in San Andres—about three weeks longer than we had planned—because it was an unusually windy February and we weren’t interested in getting our butts kicked again. Our passage from Panama to San Andres was about 240 nautical miles, and we sailed it in 30 hours, with a reefed main and partially furled jib in strong winds and rough seas. Nobody moved except to get a drink and go to the bathroom. So, despite the jet skis, the nearly-constant tour-boat wakes, and the noise of the port of San Andres, we stayed. And we stayed long enough to get beneath what Jay calls the veneer of “Duty-free Disney,” with its crowded streets lined with liquor stores, restaurants, tee-shirt shops, and all-inclusive resorts.

As is always the case, the people make the place. Even a pretty place is just a location until you make a friend. Our agent, Julian, was very welcoming and helpful, and his 13-year-old son, Keiram, came out to the boat to swim and play with our kids every weekend. 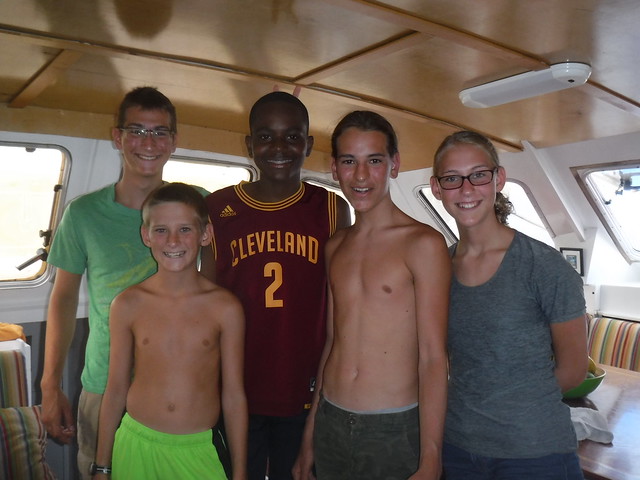 Through Julian, we met Sky, or as he likes to be called, “Brother Sky” (as a reminder that we are all a part of the same human family). At 73, he is tall, lean, and surprisingly muscular and energetic, with blue-green eyes and graying hair and beard. He wears a hand-woven hat and speaks with a West-Indian lilt. He led us on a guided tour of the island and explained its history and politics. We ended up at Star’s Kitchen, a little beach restaurant on the south end of the island near the town of San Luis.

Star’s place is charming, and the food is good—she uses fresh fish and produce to create simple, yet delicious dishes, served in hand-woven palm baskets on tables in the sand under the shade of coconut trees. As we sat sipping freshly-made fruit juices in the sea breeze, Sky talked about the “coconut culture” which once pervaded the island, but has now all but vanished. Young and old alike worked the coconut plantations: the children rode donkeys laden with ripe coconuts for export, which had been gathered by men wearing iron-spiked climbing shoes, while those too old to climb kept the books. It was a community enterprise from which everyone benefitted, and nothing from the coconut tree was wasted. While he talked of his youth in the 1950s, a time before the tourism boom, he wove coconut fronds into fish and birds. He had made all of the baskets at the restaurant, having learned the craft from someone in the Virgin Islands while traveling and working as the photographer on a cruise ship. I asked if he would be willing to teach me, and we set a date to meet again at Star’s Kitchen.

The older kids, despite being offered a day off from high-school, didn’t fancy sitting under a palm tree all day weaving baskets, so they stayed home, while Rachel and Sam and I met Sky at the bus stop mid-morning and took a local bus to the other end of the island. The bus to the beach was crammed full of Colombian tourists, so we took the bus that passes through Barrack—the hilly neighborhood where the local islanders live (as opposed to the city on the north end of the island, where the Colombian immigrants live and work). Riding the bus is the same everywhere in the Caribbean; the people hop on and off the bus and chat with each other in the local dialect—here it bears a strong resemblance to the patois of the Eastern Caribbean. The bus passed the First Baptist church at the crest of the hill; with its white clapboard sides, colored glass windows, and steeple, it looks like a church plucked from a small town in the southern United States and dropped where it could be closest to heaven—and with an overlook of the famous “sea of seven blues,” its view is awe-inspiring. The road curves down, past half-finished mansions built by drug lords and corrupt government officials, and we got off near the beach and walked to Star’s Kitchen to begin our day of weaving.

The weaving required a lot of concentration and patience, and Sky is part teacher-part guru, his mantra, “Take what you have to make what you need.” Rachel played happily in the sand and hammock all day, and Sam wove fish after fish until the motion became automatic. (Later, Sky came for pizza night on Take Two, and taught Sam to make little birds in flight.) I completed a hanging basket and learned the steps for a bowl. We paused for lunch and then wove all afternoon. As the light began to fade, we packed up my “homework,” partially-finished baskets to complete on my own. We rode home, feeling sleepy in the warmth and rocking of the bus. That night, with Sky’s words fresh in my mind, I composed a song, which I sang for him when he visited later in the week. He offered more wisdom about life and happiness and learning—”knowledge is power, but only when it is shared.” When we sailed away the next week, we had the satisfaction of having shared in his knowledge, and we took a little piece of that place with us, and left a bit of ourselves there—the exchange that forms the backbone of our travelling life. 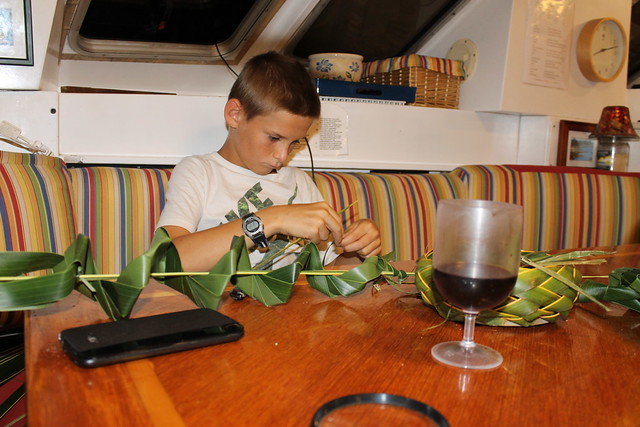 Not So Long Ago (in San Andres)

People were happy, they could live as they pleased

The people of this island

Worked together in all kinds of weather

Kept the traditions passed onto us

Things changed on this island

New people came and changed all the names,

Chopped down the trees, killed the fish in the seas

They erased the place that used to be

Now the people come and go

Eight flights a day, from far away

On boats and jet-skis, they do whatever they please

They never see what used to be

No so long ago

I left the little island

I couldn’t stay, so I sailed away

But the wind in the trees and the turquoise seas

Called to me in my dreams

I came back to the island

Though things have changed, some things remain

They can’t take from our hearts the most important parts:

We sing and we dance, we pray and we love,