While San Andres receives a million visitors each year (comparable to Costa Rica), very few of these visitors make it to Providencia, which has only a small airstrip and a little ferry, which runs the fifty miles between the two islands twice each day—there and back—in nice weather. Instead of multi-story hotel complexes, it has only a few bed-and-breakfast type places, privately-owned rentals, and small hostels. It is quiet and peaceful, and the residents like it that way. While there is some Colombian influence, the island remains much closer to its English roots—the locals still refer to it as Divine Old Providence, and most speak English. The contrast between the two islands couldn’t be more dramatic. 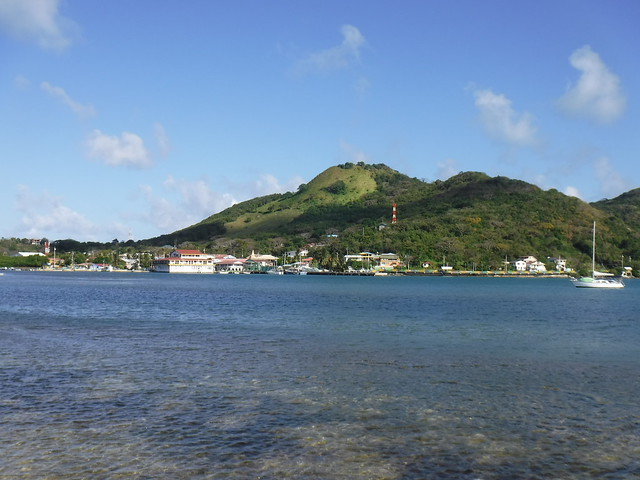 We knew we would love it the moment we dropped the hook. No jet-skis, no traffic noise, no boats zooming around, a nearly-empty anchorage—just a beautiful, green, hilly island fringed with white beaches, turquoise water, and coral reefs. It reminded us of a volcanic island of the eastern Caribbean minus the cruise ship terminal. We called Mr. Bush, the agent for checking in with customs and immigration, who told us to come in the morning, poured ourselves a drink and settled in for one of the prettiest sunsets we’ve seen in a long time. 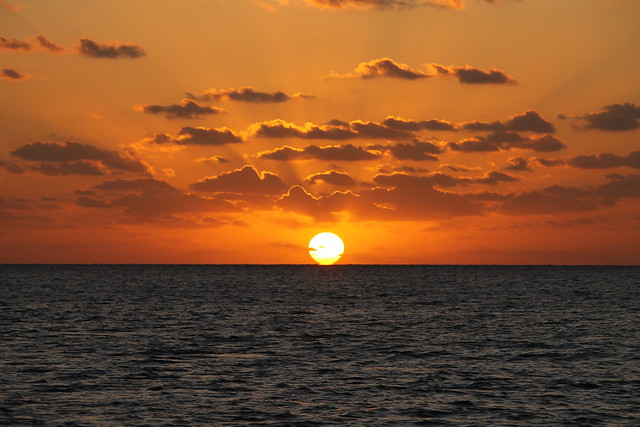 Two nights later, as the full moon rose, a rainstorm passed through the anchorage, causing a quick scuffle on deck as everyone battened down the hatches. The storm over almost as quickly as it had begun, we witnessed a phenomenon I have never before seen: a giant moon-bow—the colors of a night-rainbow clearly visible in the bright moonlight.  No camera could have properly captured that image, but I will never forget it.

Everything in Povidencia was like that—magical. We snorkeled in the lagoon near Crab Cay on a cloudless day in the clearest water I have ever seen. We drove around the island (it only takes 45 minutes!) and found Divino Niño, a beach restaurant with great food and atmosphere, that was recommended by friends. We walked around Santa Catalina on a nature trail and jumped off of a rocky overhang dubbed “Morgan’s Head” into the ocean (it looks a lot like a head, and is named for the pirate Henry Morgan, who is said to have buried treasure in this popular pirates’ lair.) We climbed the Peak, the tallest point on the island, and had a view of the famous “sea of seven colors.” And we made friends, which instantly transforms any place one visits. 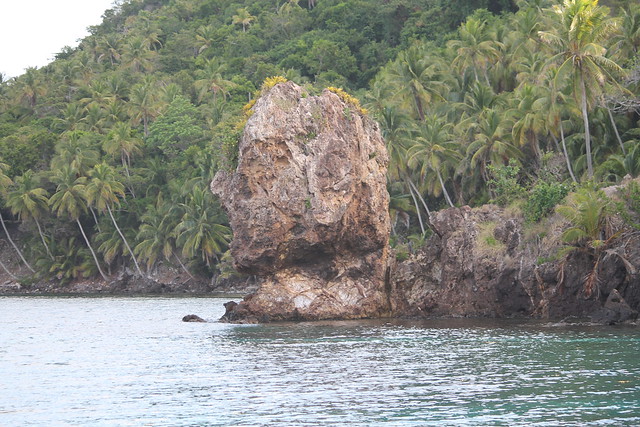 Three boats came in while we were anchored in Providencia—Aqua Lobo of New Zealand with twin ten-year-olds aboard (insta-friends for our younger crew), a young couple on Soul Rebel (Aaron discovered a fellow guitar-player, Joe, with similar musical interests), and Sea Horse, with a crew of three, one a teenage girl who plays the ukulele! We were at a crossroads—they were heading south to Panama, and we were heading north towards Cayman, but for a brief span of time, they were the best friends you can imagine. We went out for fried chicken together, toured the island on gas-powered mules, swam, raced sailing dinghies, watched green-flash sunsets over drinks and laughter, shared pie on my new favorite holiday, Pi Day (3/14, of course!), and generally had a wonderful time in a beautiful place. 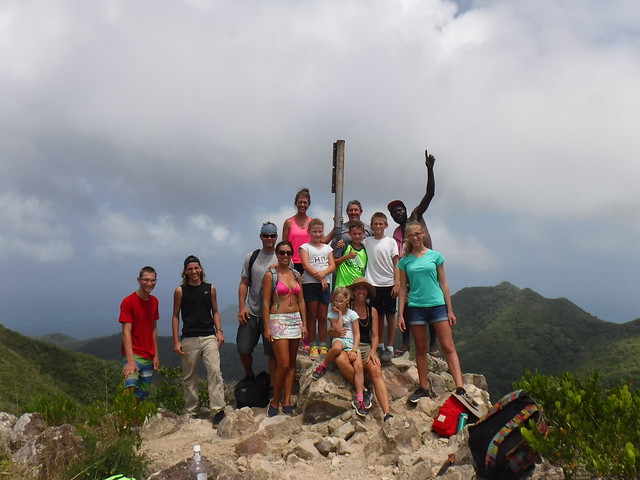 One afternoon, we were relaxing in the cockpit, and a kayak with four local young people came by. They had been out fishing and stopped by because they liked our boat. They seemed friendly, and it was a hot afternoon, so I invited them into the cockpit for some shade and a cool drink.  They introduced themselves (Luis, Tachi, Dashaina, and Jose), I introduced the kids, and within moments, we discovered a common interest in music, and I lent Luis a guitar and he began to play reggae and calypso and sing. I pulled out a ukulele and an impromptu jam session began. They stayed all afternoon, and promised to visit again. We got to hang out a few more times, and a friendship began, which culminated a couple weeks later in a spearfishing trip and an evening beach-barbecue-extravaganza with the other boat-friends joining us for amazing fire-roasted fish and pot-luck side dishes. 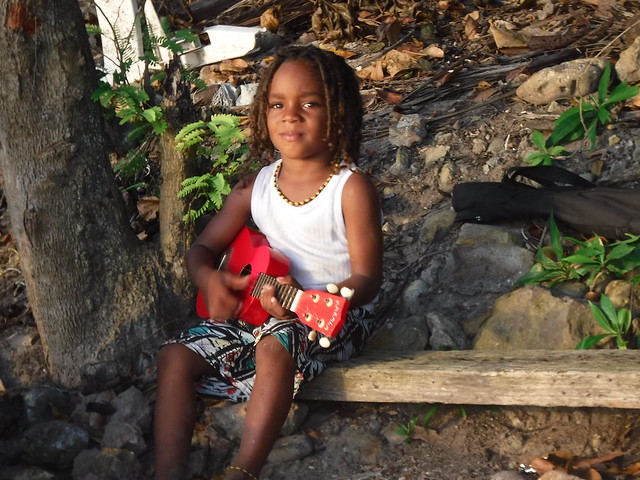 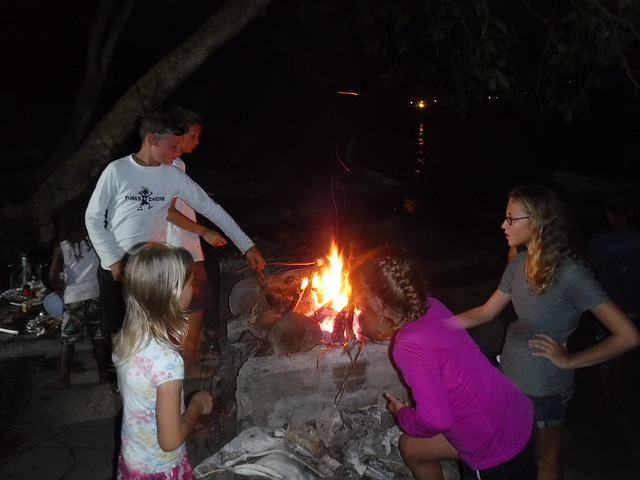 We even got to go see Luis practice with his band before they left for mainland Colombia for a competition. I dinghied over to the shore where Luis and Tachi picked me and the three boys up. We piled onto the back of two motorbikes and zoomed to the community center where the other band members were gathering for the last practice before their departure the next morning. I loved every minute—but especially enjoyed seeing the horse jaw-bone used as a percussion instrument!  My favorite song is called “Coconut Woman,” about a woman who sells coconuts every day, and lists all the benefits of that amazing nut. (Luis began to teach me how to play it before we sailed away.) 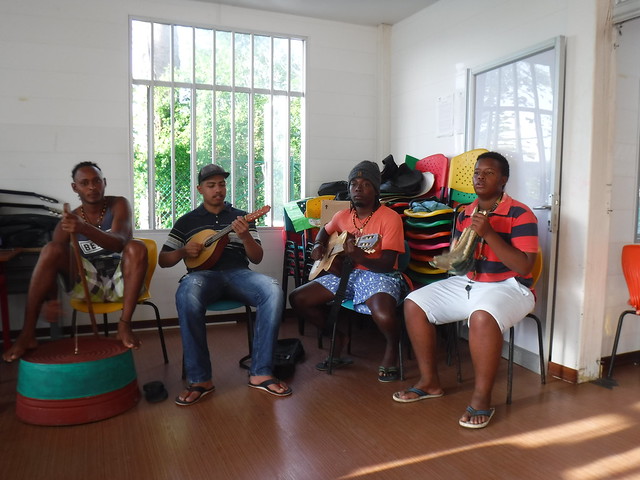 As is always the case with a place one grows to love, it was hard to leave. With an insurance deadline looming (we needed a survey by April 1), we felt pressure to head north as soon as a weather window appeared. We sadly went to check out with Mr. Bush and spend our last Colombian pesos. The next morning, after a terrible night’s sleep and a very strange dream, we knew we should pull a “Take Two.” We are famous for these do-overs, not because we are indecisive, but because we prefer to travel at the right time and recognize when something doesn’t feel right. We went back to see Mr. Bush and he straightened everything out. We were lucky enough to spend another week in lovely Providencia and have a good-bye pizza dinner with the other boat-friends.

On our last day, I paddled over in my kayak to see Tachi and to give little Luis a hug good-bye. We sat on the beach under a shade tree laughing, talking, and watching 4-year-old Luis and the other the kids play with my kayak in the shallow water. It is hard to describe the kindship I felt—it didn’t matter that I live on a boat and she on an island, or that I am 15 years older than she is, or that our skin isn’t the same color, or that we speak differently—the mysterious bond that connected us was strong enough to surpass these differences, and to make my imminent departure seem insignificant. Somewhere on an island in the middle of a turquoise sea, I have a sister. Like a rainbow in the moonlight, that is a rare and beautiful thing. 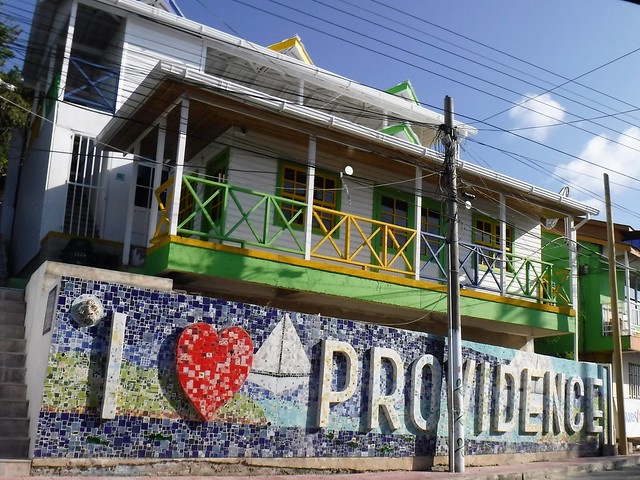