We came to the Cayman Islands to haul the boat out for an insurance survey, and also for the supposedly-stunning underwater landscape. We got the survey sorted out the first week. and broke out of the marina to experience the rest of the island. One thing many people strongly recommended we check out was Stingray City.

We did a little research, read through sickeningly-cheesy articles in tourist brochures, and talked to other people. Apparently, it all started as a bunch of fishermen in the early 1900s, who always cleaned their catch in the same place every day. Before long, the local stingrays caught on, and began showing up for the daily banquet. Not long after that, the local tourist industry caught on, and began running tours to see the stingrays. 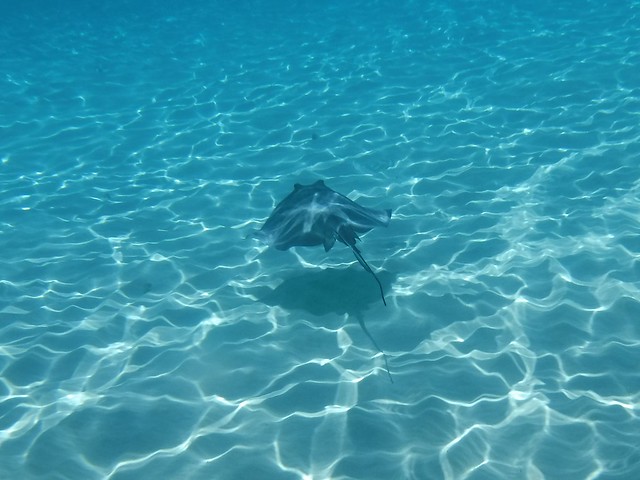 There are two sites: The Sandbar, which is shallow enough for non-swimmers, and the actual Stingray City, which lies in 12 feet of water and is hailed as the #1 shallow diving spot in the world. Both are frequented by dozens of “gentle giants” in search of an easy meal. Dive masters and tour guides throw squid in the water, and when the “lovable creatures” show up, the tourists throw themselves in to “cozy up”. Supposedly, stingrays only sting when under attack, but I would think that getting lifted out of the water, kissed, or ridden would register as attack. But apparently, not enough people have been stung to ruin the fun for everyone else.

From our anchorage, we couldn’t see the famous place, but we could see the mass of boats anchored on top of it (and almost, it seemed, each other). It looked awfully crowded, and we generally avoid large crowds. But Grandma Mary flew down for a week, and we were going to be sailing around anyway, so we figured, what the heck, and went. It was early evening when we anchored nearby, and all but a couple speedboats were left. We swam over. 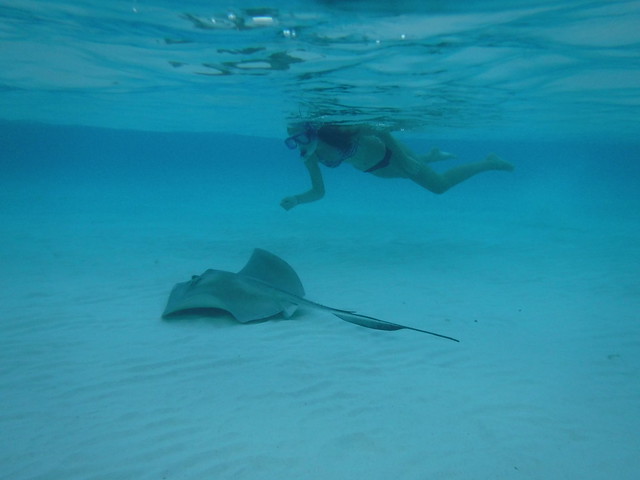 There certainly were heaps of stingrays, some of the largest I’ve ever seen. The stingrays would get close enough to touch, but didn’t hang around after they realized you didn’t have any squid. It was still pretty cool, but not “magical” and we were not “mesmerized by the antics and charm of these fascinating creatures” as advertised. It seemed like just a bunch of ordinary stingrays. Of course, I doubt that the average tourist has ever seen a stingray, so the chance to touch a wild one must seem exotic and “unforgettable.” The stingrays themselves were a diverse lot. One of them, a particularly large black one, had no tail. Another had a gash that split its face almost to its eye. Most of them were buried in sand, trying to sleep.

The sun went down, and I swam home. I enjoyed it about as much as I normally enjoy an early-evening swim. It seemed to me that the whole stingray thing was hugely overrated. 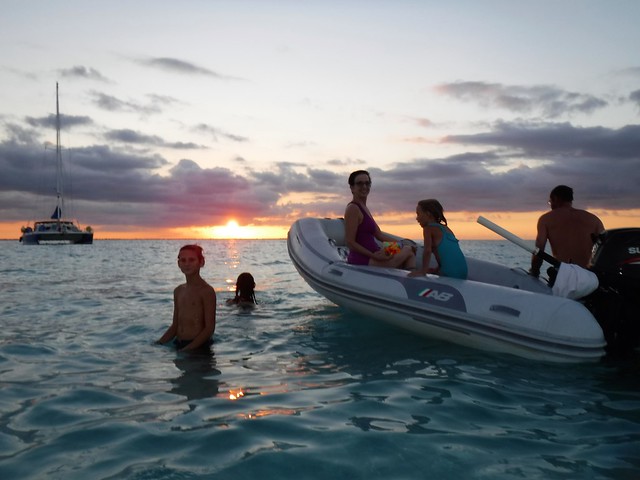 The next day, we returned. It was quite a beautiful day, with cloudless skies. The Sandbar was thickly-coated with tour boats and their camera-wielding cargo. Mom, Rachel, and Mary swam over to look at the stingrays, and the rest of us (except for Aaron, who stayed on the boat) swam over to the reef. The coral, for the most part, was bleached, but there were quite a lot of fish. We saw a number of ridiculously large snapper, which were so docile, I could easily have shot one with a short pole spear (which is totally illegal, of course). We returned to the boat. Mom, Mary, and Rachel were still off playing with the stingrays, so we just swam around the boat, reluctant to mix with the throngs of tourists. I absently began stacking rocks and lumps of dead coral into a big heap. Sam and Sarah joined in the fun, and the heap soon turned into a cairn, and the cairn into a tower. We decided it was done when it was as tall as I was. 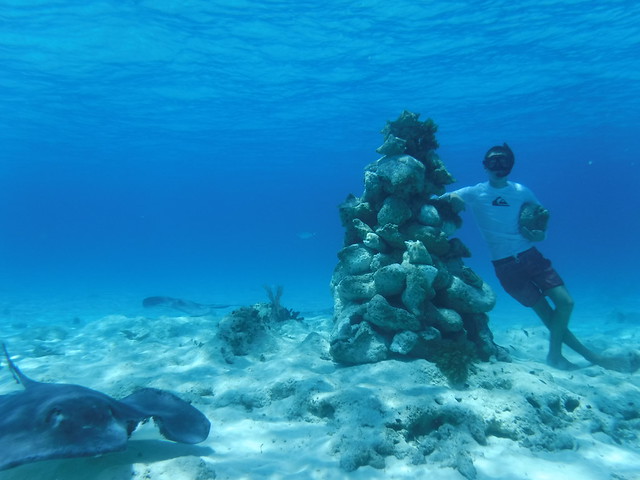 Mom, Rachel, and Mary had since come back, with lots of photos. We picked up the hook, and left the zoo behind us. So much for Stingray City, the island’s premier underwater attraction. 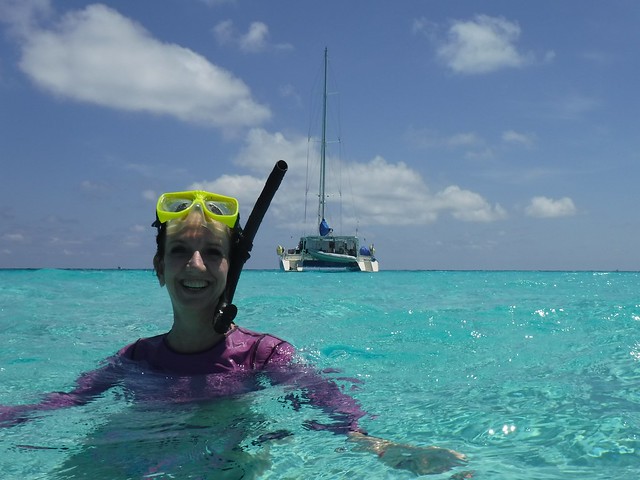