One of the many things we decided prior to departure was to replace our old dinghy, a twelve-foot fiberglass-bottom inflatable AB, with a 2001 Mercury two-stroke 25hp. We were finding leaks and having to pump it up every few days. Because its days were numbered, we opted to buy a new one before leaving for an extended voyage. We eventually decided to go with the thirteen-foot aluminum AB, and bought a fuel-injected four-stroke Suzuki 30hp to power it.

Some of the differences are that the Suzuki has a lever shifter instead of the Mercury’s twist-shift, it doesn’t have a tiller extension, and you don’t have to mix the gas with the oil. Our motor is one of the newer models, with a built-in computer that tells us when to change the oil, and when it is getting too hot. It doesn’t get on a plane as easily with the whole family aboard (even with a hydro-foil), probably because the old dinghy had a custom prop. The new dinghy has more internal volume, and can carry all the necessary groceries, laundry, or snorkel gear wherever it needs to go. It can go at greater speeds through rougher seas than the old dinghy could, and instead of slamming, the deeper V-shape of the hull helps cut through the waves and makes the ride more comfortable. We have yet to try taking the hookah in the dinghy, but so far, it has proven itself worthy of the crew of Take Two. 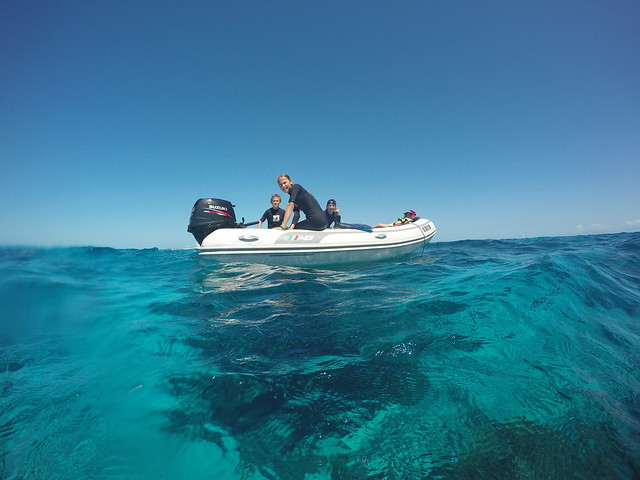