Located on Isla Bastimentos in Bocas del Toro, Panama, Agua Dulce is a small, privately-owned marina run by a guy named Bobby and his family, who have been living in the area for years. We heard about them from some friends we had met in the Keys who used to work there. When we got to Bocas, we looked them up. They have a reasonably long dock, a workshop with metal-working, canvas, and fiberglass sections, a guest house, and a medical clinic, in addition to their own house and large multi-purpose building. They have three home-schooled kids, a boy and two girls, ages 6, 10, and 14, respectively, so at least there are some other kids nearby with which to play.

Previous to our acquaintance, I had been consistently finishing my school work before noon, and had a surplus of free time, so the idea of getting a job sounded pretty good. I started driving the dinghy the two-and-a-half miles to Agua Dulce every day at around 1:00, to volunteer until 5:00. I basically did clean-up/sorting chores or helped a guy named Ben who works there, with whatever he was doing. A lot of the stuff there is related to panga work (local fiberglass motorboats), such as welded stainless tops, painting, motor work and replacement, wood floor pieces, and fiberglass, though they also do boat storage and other things. Ben does all the welding and metalworking, from door handles to tops for pangas, and taught me how to sand down and polish the welds to make them smooth and shiny. I also stripped things like cleats, lights, D-rings, and steering systems off of boats that needed to be sanded and painted. The sanding and fiberglass is handled by “the guys,” a group of indigenous workers hired from the two adjacent villages, led by Felipe, the most experienced of them. 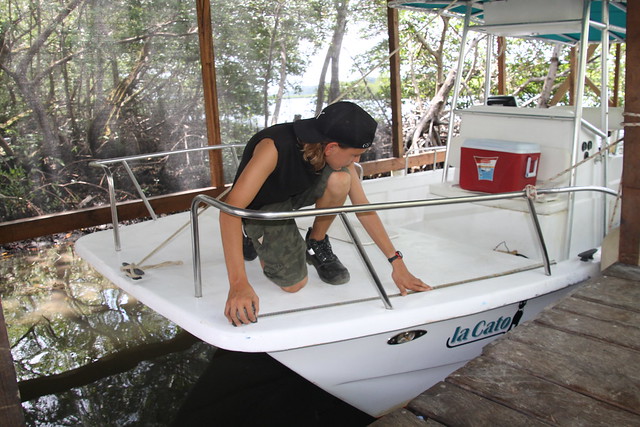 Ever since I started working there, I noticed that the guys watched me a lot. One day I needed an extra hand, and asked one of them for help. Though my Spanish was not very good, I was able to tell him what I wanted, and it worked out fine. A couple of days later, now that they knew we could communicate, they asked me what my name was, so I told them. A week later, though I was sure that they knew my name, they started calling me “Crosh.” I didn’t find out what that meant for another couple of months, and as it turns out, the English equivalent in their native dialect is “skinny guy.”

There are several funny anecdotes about the guys, like one time when Ben, Bobby, and I were working on a boat and using the Sawzall. Michael (one of the guys) walked up and asked (in Spanish, of course) “Do you need the Jiggy-Jiggy?” and pointed to the Sawzall. We gave it to him, and when he was gone we all started laughing. The Inspiration for the name of this blog post came one especially hot day when I spent two-and-a-half hours pumping mixed gas out of a boat that was getting a four-stroke motor. I ended up soaked in sweat and fuel, and getting a cut on my hand, hence the blood, sweat, and gasoline. 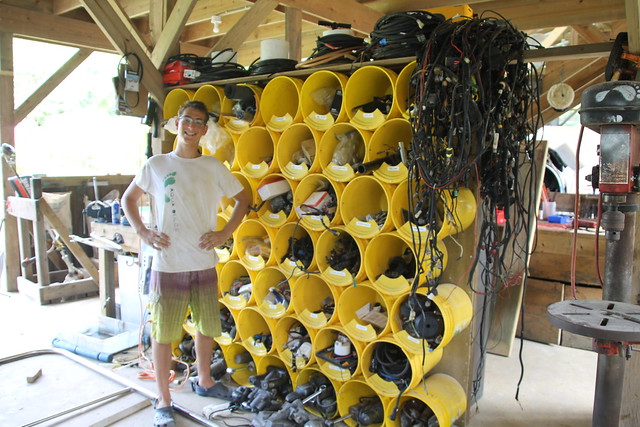 After a month or so, Eli began joining me every day, taking over most of my cleaning and organizing jobs, so I leveled up to tasks like preparing motors for removal and installing steering systems on boats. We got to know the place, where all the tools were kept, the names of most of the workers, and got into a regular routine. When a customer wants his boat totally sanded down and repainted, it is taken up the canal and pulled up onto the bank. It is then stripped (my job), sanded down (the guys), and whatever fiber-glassing is needed is done before it is painted. When it is ready, Felipe paints the exterior whatever color the customer wants, then paints the interior gray with black-and-white speckles, and then paints the bottom. Then we reassemble it and make a couple of improvements. If he wants a welded top, then Ben makes it, installs it, and then we give the boat back to him.

The canvas guy, Geoff, had to leave Panama for a month this past summer, and was later followed by Ben. While they were gone, it was just Bobby, the new addition, Zack, and us, working. Until then, we were referred to as “the Interns,” but after we took over some of Ben’s jobs, Bobby started paying us $3 an hour to do what we had been doing for nothing. When Ben got back, Bobby left for his first vacation in three years, leaving Ben to keep things under control until he got back, and nothing went horribly wrong.

I’d like to say that my performance is flawless, but I really can’t, because I still make mistakes now and then, like drilling a hole too big, or breaking off a screw. But that’s another thing I like about Agua Dulce: it’s a good learning environment. Bobby accepts that mistakes are made, and that everyone is still learning, so when someone messes up, we just try to find a solution, and learn from the mistake. The whole experience has been a good way to: (A) fill a couple of empty hours every day, (B) learn some good skills that I’ll use for the rest of my life, (C) hang out with some cool people, and (D) earn a couple of bucks.