The house is sold, the storage unit is full of old photo albums and baby books, Salvation Army came last Friday to pick up what was left in the house, the boat’s major systems have all been overhauled and I am exhausted. It has been one year since our successful experiment, a month of living aboard that confirmed that we were ready to make the move. That’s one year of paring everything down to nearly-bare minimum. That’s enough time to sort through things slowly, and to make the move without a lot of extra stress.

It wasn’t like that when the Stuemers moved aboard. About the time that Jay and I were graduating from college and getting married, a young Canadian family who had sailed their little boat on the Ottowa River just a few times decided to buy a cruising sailboat, renovate her, move aboard and sail around the world. Once they made up their minds, Herbert and Diane Stuemer put their plan into place with mind-blowing rapidity, selling a business and renting their house, renovating the boat and planning a shake-down cruise down the Eastern Seaboard. No poking along at a snail’s pace, waiting for everything to be “just right.”

And they made it. It took six years for this intrepid family of five to use the four winds to sail across three oceans and through two canals to make one enormous circumnavigation of our globe. But that is not what makes Diane Stuemer my hero. She was a mother of three lucky boys—boys who left a “normal” life to be homeschooled in the world’s classroom. She was a writer who lovingly documented all of their travels, adventures and mishaps in such a confiding way that she befriends you as you read. She was a wife who supported her husband’s wild dream and went along on the ride of her life. She lived her life to the full.  This is not what makes her my hero, though I do admire her for these things.

More than this, Diane Stuemer was a light in dark places. Northern Magic left in her wake a chain of friendships all over the world, and Diane tried to make a positive impact wherever she went. It is not good enough to simply leave a “clean wake,” in my opinion, to leave a place nice for others or to leave no impact at all. It is one of my life’s goals—and one that I am instilling in my children—that you must leave a place better than you find it.  If we go to the park in the afternoon, we pick up trash we find in the grass. If we play at the pool, we pick up pool toys that other children left lying around. And, on a much grander scale, this is what the Stuemers did. Their compassion for others led them to make choices that positively affected the places they went and the people they met. They made a few mistakes along the way and about those well-intentioned mistakes they were transparent and humble.

Even if we don’t make it halfway as far as the Northern Magic, I will feel that the journey is a success if my children learn those two simple, but life-transforming lessons: leave the world a better place than you find it. Admit when you make a mistake and learn from it.

About six months after her book, The Voyage of the Northern Magic was published, cancer took Diane’s life. Thankfully, she had made memories with her family to last a lifetime, and she had not wasted her short time on this earth.  I miss her—when I feel lonely for the companionship of another woman who understands the myriad frustrations of living on a boat with rambunctious children and a man who has too many tools, I pick up her book and laugh a little. I wish I could call her up and have her tell me not to worry about the things I worry about, that it will all come out right in the end, and that we’re on the right track. For inspiring us to make the journey that started more than two years ago, and for leaving the world a better place than she found it, Diane Stuemer is my hero.

If you want to read about the adventures of the Stuemer family, join Diane on a trek across the globe in
The Voyage of the Northern Magic: A Family Odyssey.

Here is how an orange and child are alike:

Here is how they differ:

Oranges do not scream or wiggle.
Oranges do not bleed bright red blood.
I do not have an emotional attachment to an orange.
If I fail to stitch up the orange correctly, there are no long-term consequences. 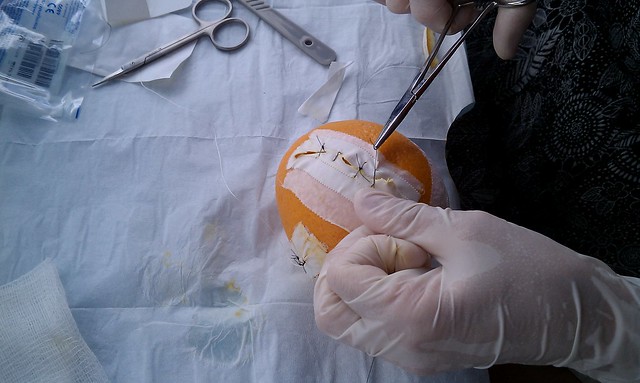 Jay and I just finished a two-day marine medicine seminar which covered most of the first aid skills we will need if (when) mishaps happen aboard our boat when out at sea. We should be able to take care of pretty much anything—with the right tools, knowledge of how to use them, and someone on the other end of the satellite phone telling us what to do next!

It should be reassuring to our parents (our children’s grandparents) that we are trying to round out our sailing education with classes teaching us how to deal with medical emergencies. I can tell you, though, that thinking about all the things that could happen is not very reassuring to me!

Incidentally, at the end of the orange rind experience, I came to the conclusion that stitches are a last resort—skin glue and medical staples are the way to go for a laceration!  A special thanks to Jeff Hazzard of Medi-Test and a fellow cruiser in SSCA for a great weekend of learning. 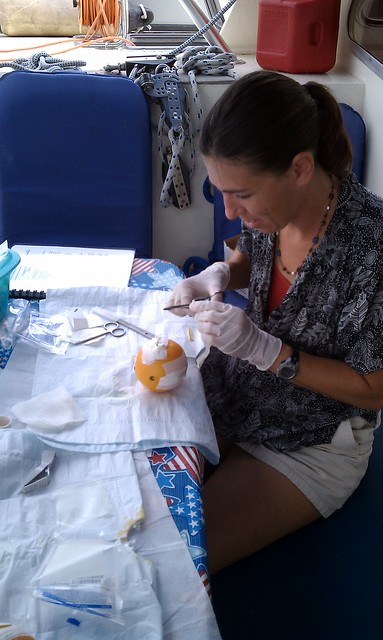