A man who is not afraid of the sea will soon be drowned…for he will be going out on a day he shouldn’t. But we do be afraid of the sea, and we do only be drownded now and again. –John Synge

When we bought Take Two, she already had her name, and even though we’re not particularly superstitious, we decided not to rename her. She was the second boat we thought seriously about buying—the first having slipped through our fingers as we dawdled and debated—so in many ways, she represented a second chance at success. Since that time, some folks suggested that we should have renamed her “Take Six,” but then we added another crew member. It’s too much work to keep scraping off the old number and applying a new one, so that’s out. Besides, it only took two to make the rest of the crew.

Last week as we attempted to leave Fort Pierce, a new meaning for the name of our vessel became apparent. We headed out the pass against the current (we had been trying to make it out at slack tide, but missed), and then slammed straight into 6-9 foot confused waves that wreaked havoc on our interior. Oops, forgot to duct-tape the refrigerator door…and take everything off of the galley counters. We’re a catamaran, so we sometimes forget that sort of thing. Actually, we make it a point to never set sail in weather that rings our ship’s bell or causes the drawers to fly open. The fact is, we didn’t know what we were going to find, so we decided to take an exploratory look. Needless to say, we did not like what we saw, so we headed back to anchor and wait for better conditions. This is a familiar scenario. When we left Bradenton, the same thing happened. It seems to always take two tries for us to leave.

The first try requires a colossal amount of energy and courage, for whatever reason. Once we get entrenched in a place, we really struggle to untie the boat. Once that first hurdle is overcome, we spend at least one night at anchor to acclimate and help us get an earlier start. Then, with trepidation, we head out after sunrise to find out what kind of travel day we’re going to have. If it looks like a long, miserable day, we turn around. That’s why we never sail on a schedule. After the harrowing experience of take one, take two usually finds us more prepared, less nervous, and relieved when our patience pays off and we get the conditions we were waiting for.

So after a week of waiting on the hook in Fort Pierce, we tried our luck again on Sunday and were happy to find calmer seas. By the time we reached the Keys, the wind was cooperating and we had a great sail to Marathon, where Take Two will be moored for the winter months.

Very few pieces of gear on our boat get as much use as the pots and pans in the galley. In addition to my treasured cast iron skillet set, I have nesting stainless steel pots by Galleyware. I’ve had them for several years now, and aside from a few dings (from kids using them as drums), they are in good shape. The detachable handles aren’t doing so well, though, and when I looked at the replacement parts at www.galleyware.com , I saw that they had improved the design of the set and the way the handles attach/detach, so I decided to replace the pots and pans entirely. And boy, am I glad I did! 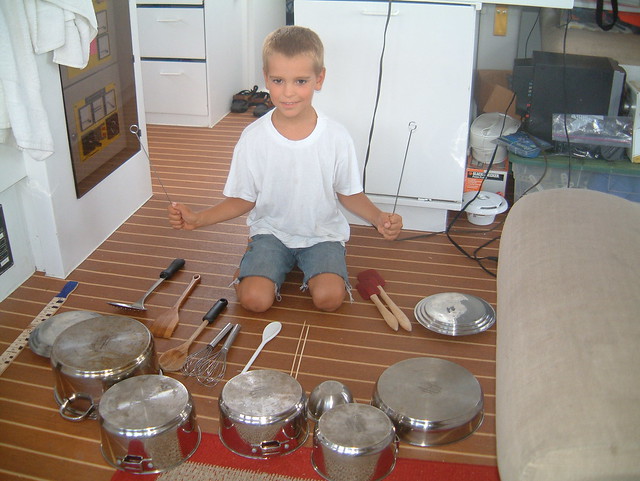 I love these pots and pans. There are 12 pieces in the $138 set: a stock pot, a skillet (which can also serve as a cover for the stock pot), a 3-qt. pot, a 2 1/2-qt. pot, a 2 quart pot, 2 detachable handles, a large universal lid, and 4 plastic covers for storing leftovers. I also bought a small universal lid which fits the three smaller pots. They are made of heavy, marine-grade stainless steel, with an aluminum core for good heat distribution. The whole set nests neatly in the stock pot and fits in a drawer. One of my favorite features of this particular brand is the plastic storage lids; you can detach the handle, cover the pot and stick it in the fridge for tomorrow’s lunch, making leftovers easy to warm up. 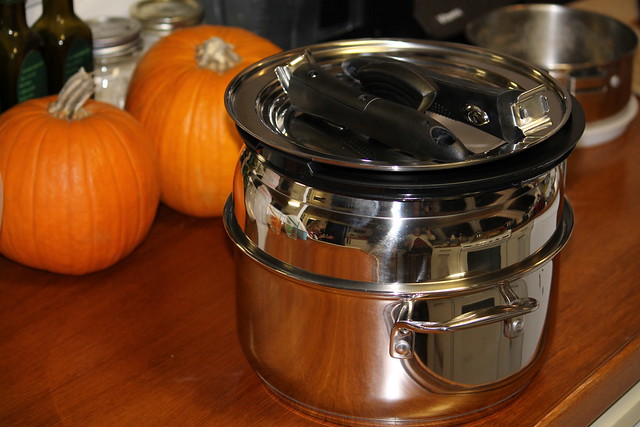 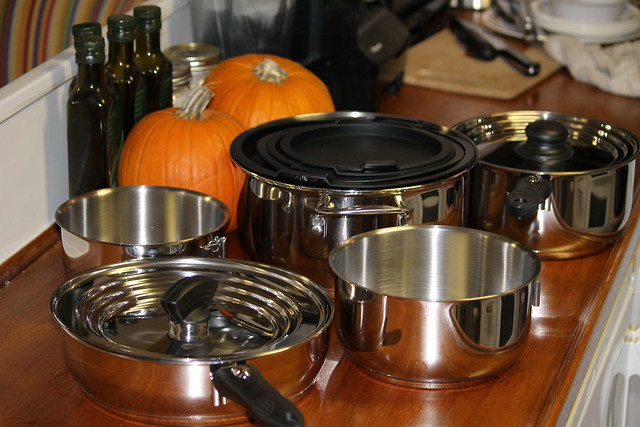 This product is tried and tested—one I can recommend wholeheartedly to those who own boats or RVs or who simply want to reduce clutter and save space. For what it’s worth, these pots and pans get the Take Two seal of approval.