In keeping with our trend of undertaking huge summer boat projects, we’ve decided it’s finally time to replace Take Two’s engines.  We’ve been playing with the idea for a long time, but there has always been one impediment or another.  It seems we’ve always been at a lack for motivation, resources, or clarity about the project.  Now all those pieces have fallen into place, and when we look at what the next few years likely hold for us, we feel like it really needs to be done.

In two weeks we’ll haul the boat out of the water.  A crane will lift the old engines out and put the two new ones and the new generator on deck.  We’ll repaint the engine rooms, refresh all the ancillary equipment, lower the new engines in and that’s it!  Right.

We’re hoping it only takes two weeks, allowing for three, but of course it will take as long as it takes.  So many things could go wrong.  We’re going to do the minimal amount of work necessary while out of the water, which is most of it.  The generator, however, will only be set in place and not hooked up.  We can do that later.

Originally I thought we’d do the project in the water, but then came to realize that being disabled at the dock during hurricane season wasn’t the best idea.  We were going to have to haul out to make some adjustment to the props anyway, and there are some other parts of the job that will be easier out of the water, so we might as well do all the work in the yard.

We’ll necessarily be displaced from our home while it is on the hard.  Tanya would likely vacate in any case.  We liked the arrangements we made during last year’s 4-week bottom job, and have rented the same condo again.  I’ll stay in town where I can supervise the project, and hopefully get some real work done too.  Tanya will come and go from the condo, visiting friends and family.  Spice will stay aboard.

I’m very excited about this and can hardly think about anything else.  I get anxious any time the boat is out of the water, this time even moreso because of the importance of the project and the tremendous cost.  But I think it is going to be great for Take Two and for us.

Spend enough time around boats and the water, and you’re bound to fall in sooner or later.  It happens to everybody eventually and today it was Rachel’s turn.  This is how it happened.

Tanya, Sarah, Sam, and Rachel were heading off to the store.  While walking up the dock toward the parking lot, they passed a boat having its carpets cleaned.  This was evidently a pretty interesting process, and everybody took a good look as they walked by.  But Rachel’s attention was so drawn by the strange machine that she failed to maintain proper course and speed.  Looking to her left, she veered a little too far to the right, and walked right off the dock.

This was a fixed dock, so not a simple matter of reaching down and scooping her up.  It was about a 6-7 foot drop.  Tanya heard Rachel’s splash and jumped in right behind her.  Sarah and Sam ran to get me.  A guy from the cleaning crew heard the commotion and reached down to hold Tanya’s hand and help her stay above water.  I got there with the dinghy and brought Tanya and Rachel back for showers and dry clothes.

All-in-all it went pretty well.  I don’t think they were in the water for more than three minutes and nobody was hurt, but we always analyze this kind of event and try to figure out what we could have done better.

What we did right:

Rachel never goes on the dock without Mom or Dad, and shouldn’t be on deck without us watching either.  Tanya was there and reacted quickly.

Nobody panicked.  Rachel did her best to float as she had been taught.  Every kid I’ve ever seen fall in freaks out.  Rachel did not even cry.  Totally calm.

While going to get Dad may have been a natural reaction for Sarah and Sam, in this case it also happened to be the quickest route to rescue.  I already had the dinghy in the water because, believe it or not, a guy from another boat had already fallen in this morning.

After telling me what happened, the kids returned to Tanya to let her know I was on the way.

The dinghy was definitely the best way to get them out of the water.  Water to dinghy, dinghy to boat, and shower on the transom is a process we’re all intimately familiar with.  Bringing them back up to the dock by another means may have worked, but it wouldn’t have been as fast and simple.

What could have gone better:

This marina, probably like many others, is short on devices for self-rescue.  It’s a long drop to the water and there are very few ladders.  Really the only option for climbing out is a boat with a swim platform.  The current in this area is strong, and swimming upstream is very difficult.  There really should be better equipment for helping someone get out of the water.

Tanya and I had often thought about what to do if someone fell in.  We always assumed it would be Rachel, and our working plan was that someone would jump in after her and swim to a nearby boat.  However, Tanya felt differently once she was in the water.  Her immediate need was for flotation, and nobody was prepared for that.

I don’t want to be too hard on them, but the kids could have done a better job.  They know it.  Sam and Sarah did not both need to come get me.  One could have gone the other direction to the dockmaster’s office.  Either could have brought back flotation.  A cushion from our boat or another boat, a life ring, a dock line, anything.  The older boys back on Take Two came running when they heard the call.  They didn’t bring flotation either.

Rachel is making good progress with her swimming, but she’s not there yet.  This has been a big priority for a while now, and Tanya has her in the pool almost every day, but it can’t happen fast enough.  It was apparent that Rachel’s emergency floating practice kicked in, but she needs more.

Afterward, as we all relaxed and debriefed, some silly adrenaline-induced mistakes came out:

When I jumped in the dinghy, I was in such a rush to get it started that I jerked on the choke with the strength I meant to use for the pull cord.  I’m lucky I didn’t break it.

As I pulled up to Tanya and Rachel in the water, I actually tried to hand her a cushion.  She looked at me like I was an idiot, completely ignored my cushion, and just grabbed the boat.

My brain was still addled when we got back to Take Two.  I’ve parked the dinghy between Take Two’s transoms hundreds of times and I always do it the same way, but this time I unintentionally parked it backwards (bow to starboard instead of port).  Then I tried to get out without hooking it up to the davits.

But Eli gets the prize for absentmindedness.  He was in the bathroom when Sarah came yelling that Rachel had fallen in the water.  Eli is our hero, our man-of-action.  If someone needs his physical help, he's there.  So when Aaron and I rushed out to help, he came too.  Unfortunately he forgot his pants.

Tanya has often accused me of leading a sedentary lifestyle, and I can’t disagree.  I spend much of my time sitting, and I despise intentional exercise.  Yet eat and drink as I may, I remain as thin and fit as a teenager.  It’s a mystery.

For her part, Tanya has been practicing yoga.  I was watching her recently and thinking that it didn’t look so hard.  Naturally, I kept my comments to myself, but later it occurred to me: I am a yoga master — boat yoga.

Boat yoga poses are different.  They're called things like “aft macerator”, “port oil filter”, and the dreaded “prop shaft coupling”.  And they have to be done while holding heavy tools, using nasty chemicals, and working around hot engines, razor sharp hose clamps, and live electricity.  Instead of pronouncing Om and seeking inner peace, a boat yogi cleanses his spirit by muttering obscenities and being generally unpleasant.  Tanya and the kids prefer to leave the boat whenever I’m practicing a new or complicated position.

Here’s an example of boat yoga.  I call it “shower sump repair”.  I don’t know if it has a real yoga name.  You start in a kneeling position, and then lean as far as you can forward without support from your hands.  Pretend you’re cleaning, scraping, applying epoxy, drilling holes, crimping wires, tightening hose clamps, etc.  To do it correctly, you must transition in and out of this position several times, each time to go get a heavier tool which must then be held at arm’s length in front of you.  You may also get beers as necessary to maintain focus.

Do that one long enough and for the next couple days you’ll be sedentary, too.

On Day 4 they removed the other two pistons, the crankshaft, and the camshaft.

What I found most remarkable about these pieces was the precision of the machine work and the intricacy of the lubrication system.  I really thought that oil just kind of splashed around in there. No, there is a pump, a gallery, and tiny little paths for the oil to flow through and keep all the parts moving smoothly.  It’s ingenious.

This is pretty close to the end of the project.  We’ll have one more review session, and then we’ll take a field trip to the scrap yard.  My original goal was to have them put it back together, but I’m not sure there is much value in that.  I think they get it. 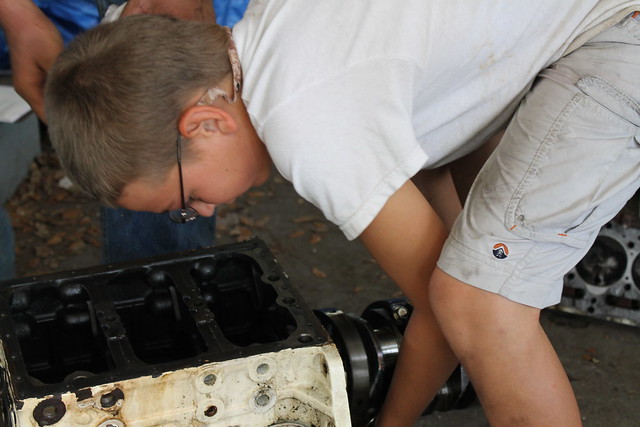 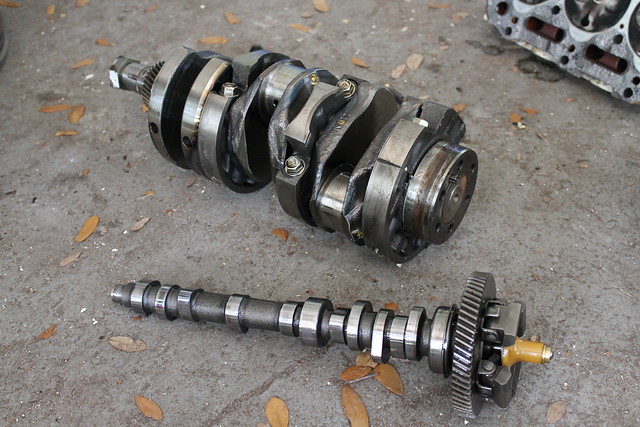 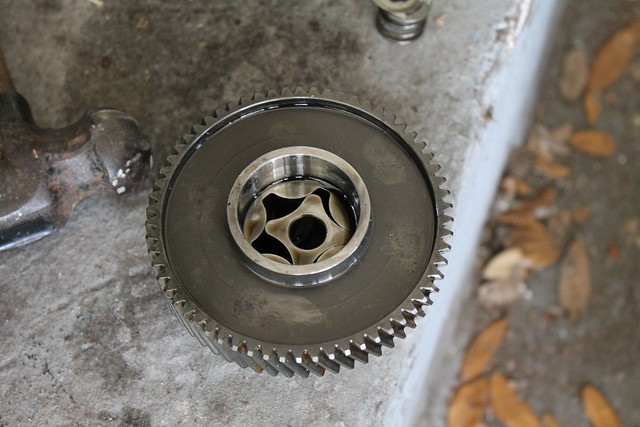 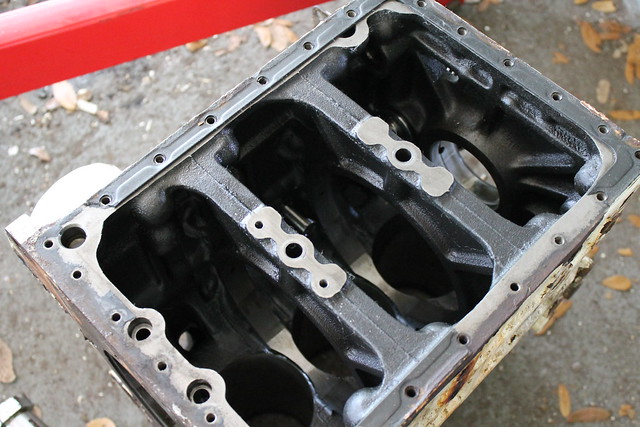