Oh, how I look forward to long, boring passages. Really. Time seems to telescope as the instruments count the tenths of nautical miles to the destination. And what shall we do with all this time? Eat very slowly? Talk? Read aloud by the hour? Fish? Watch the fabric of the ocean for the interruption of flying fish or the dolphins of Happiness—or, maybe, if we’re lucky, a whale? Stare lovingly into the deep-blue water and wonder, "what are those specks floating all over the place?" This morning, as we glided over the glassy surface of the Gulf Stream, for lack of anything better to do, I grabbed a bucketful of water, dug the microscope out of the science bin, found some slides, a petri dish, and an eyedropper and opened the Ocean Lab. 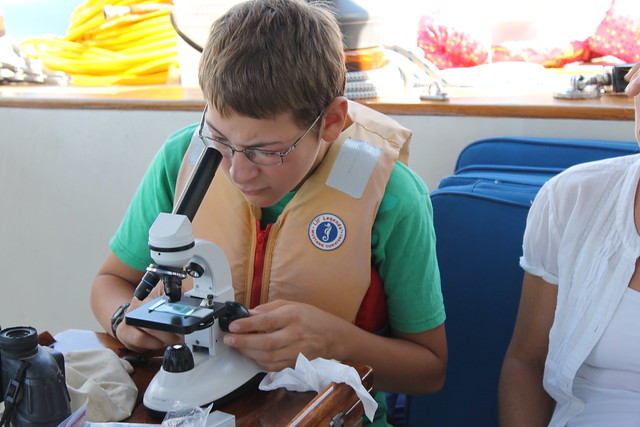 This morning’s victim was what I might call a “Floating Puffball from Inner Space.” I suspected it to be algae of some sort. It was a globe of greenish-brown with fine hair sticking out in all directions, about the size of a poppy seed. I sucked it up into the eyedropper and deposited it on a slide in a drop of water. At 40X, it looked like a mass of very fine tangled hair. At 100X, I began to see other, smaller things moving in and out among the hairs, and at 400X, the thing looked like a forest with small animals running in and out of the trees, changing direction mid-stream, diving and flying between the foliage. Each tree trunk was a hair—it was only a few cells thick, and it was clear from the cellular structure that it was plant-kind, but there was movement within each stalk and each moved like a tree waving slowly in a breeze. The tiny one-celled creatures within the forest of algal stems moved with incredible speed and energy. I felt like I was looking at Horton’s Whos down in Whoville. It was mesmerizing.

Once, at a local farmer’s market, I bought a head of heirloom broccoli, not because I wanted to eat it, but because I wanted to look at it up close: its stalk was a perfect spiral staircase of florets, with each floret a perfect spiral of buds, and each bud, in turn, a spiral. It was a perfect fractal repeating to the microscopic level. We have, for school and for fun, looked at inner cheek skin cells (animal), onion skin (vegetable), salt crystals (mineral), a honey bee’s stinger (barbs on barbs!), tiny brine shrimp (with compound eyes), the statue of Lincoln inside his Washington D.C. Memorial (on a penny), no-see-ums (look at those jaws!), hairy spider legs, fleas, and anything else we could capture and study. The C & A Scientific “My First Lab” Duo-Scope portable microscope with battery-operated LED bulbs (allowing you to look at both opaque and translucent objects) is probably the best science purchase we have ever made. It is so easy to use that even the youngest of our children has been able to view the tiny things on the slide—with the instant reward of discovering something strange and new.

The more I stare at that bright circle at the bottom of the dark tube into the magical world of the unseen things, the more I wonder how deep the rabbit hole goes. If a tiny alga can be home to animals as numerous as squirrels in the woods, what else can be possible? I read that we are, by genetic material, only one percent human. That makes me a planet-home to microbes more numerous than the population of humans on earth. Is everything a microcosm—a world inside a world? I feel like a peeping Tom peering in at a Creation too great for my limited intellect. This is usually the point at which I have to put the microscope away and look at the horizon because I suddenly feel a bit dizzy. 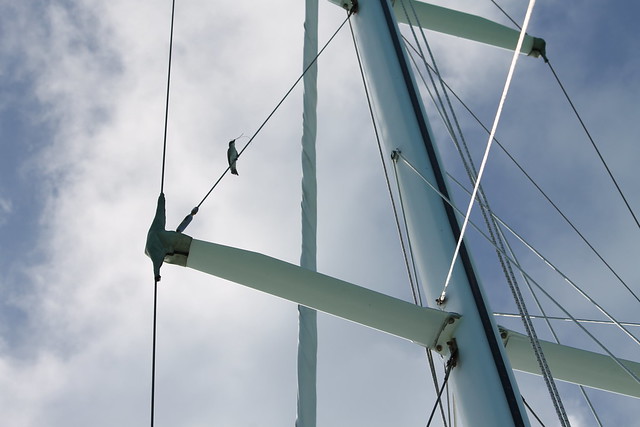 Jay and I are both hard workers, and come from families that value hard work, but this value doesn’t appear to pass to the next generation through the genes; work has to be taught, and to people who really would rather lounge around and play all day with toys someone else paid for, eating food someone else prepared, wearing clothes someone else bought in a home that someone else keeps tidy. But to enter into the life of a family one has to do the work of the family. And real life doesn’t reward sluggards, either. To the best of our ability, we will raise people who can leave our home able to do a myriad of jobs, efficiently and with expertise.

One way we do this is with the chore chart. People ask us how we can have five children on a sailboat, and one answer is that everybody has to pull their own weight. Of course, a 3-year-old “helping” with the dishes is hardly the same thing as a nearly-13-year-old scrubbing down the cockpit, but the principle is the same: if you don’t work, you don’t eat.

A lot of training is required to get the kids to be actually helpful, so that Jay and I don’t feel the need to go around behind them “fixing” things. For a while at least, it is harder to help a kid learn a chore than to just do the chore yourself, but doing it for them or cleaning up after them would be shooting yourself in the foot long-term. A kid who is given a token chore will quickly learn to slack off—if they know you’re going to go back and do it better later, why bother doing it at all? But teaching a kid to do a task and requiring it to be done to your satisfaction is an investment that pays off pretty quickly. I read recently about the Amish expectations of children: a child is a net “loss” for the first six years, but a seven year old “breaks even” (contributes as much as he costs) and by ten, an Amish girl can do all the tasks her mother can, a boy can work a full day on the farm, and they are giving back to the family—a net “gain.” We’re not Amish, but we do have high expectations for our children—we‘re banking on the principle that early training equates to later independence.

A crew member on Take Two gets his or her first official duties at three years old. Rachel just made the chart for the first time. She helps with groceries, sets the table, washes windows, folds kitchen towels, and puts away forks and spoons. The older kids are used to hard work at this point, although they still complain from time to time (complaining usually earns them an extra job). They vacuum the whole boat, do dishes, load and unload the dinghy, take trash ashore, scrub decks, set up for and clean up after meals, and stay on top of the laundry. One would think that I would have time to sit in my hammock more often now that I have such able helpers, but actually, their taking some of the cleaning chores frees me up to do other tasks, like reading with Rachel and schooling Sam, making homemade tortillas or baking bread, writing, or helping Sarah with her quilting project.

For years we have used a monthly rotation with each person getting four or five jobs (some require teamwork) because we found that a month is long enough to get really good at a chore, but not long enough to grow bored with it. We’re doing an experiment this summer with quarterly chores; the kids had more input as to which chores they like to do and I got to assign some chores according to who is the most capable at each task. We’ll have another family meeting in the fall to decide if that system is working.

If someone shirks a chore, there are real and immediate consequences. A chore half-done must be re-done, a chore forgotten costs one a “reminder fee” of 50 cents, and a chore done with a bad attitude earns one more chores. We do offer a monthly allowance to teach money management, but that assumes that the kids are meeting expectations—keeping their cabins tidy, folding and putting away their own laundry, helping with meals, and doing assigned chores “immediately, cheerfully, and quickly.”

Another of our favorite sayings is “Work hard, play hard.” When the work gets done quickly, there’s time left over for skating at the park, snorkeling on the reef, surfing at the beach, riding horses, kayaking, and lots of other adventures, the natural rewards of a job well done.