We had a small electrical problem a couple weeks ago.  While making breakfast and running the airconditioner one morning, we got one of the conductors in or 220V wiring hotenough to melt through the insulation and short against the otherconductor.  This caused our 50A shorepower breaker to trip.  That put an abrupt end to the air conditioning, battery charging, and pancakes. 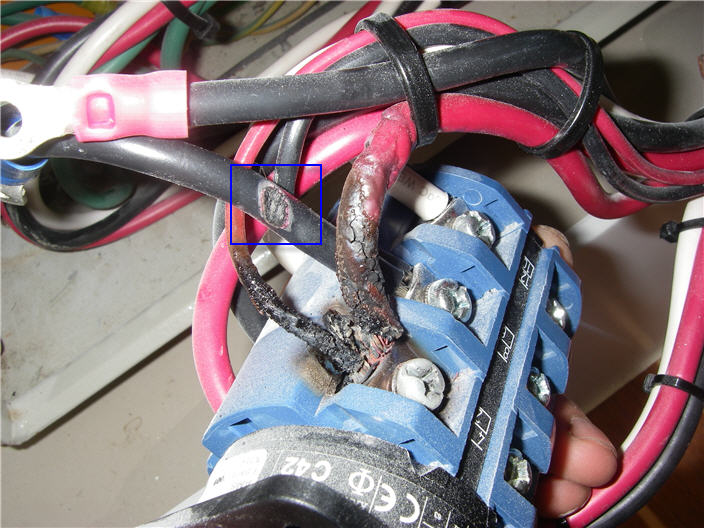 The wires in question are 8 AWG and more than adequate forcarrying 50A at 110V.  I’ve seen thestove pull an impressive amount of power, but the breaker should have trippedlong before any wiring was damaged.  Ifour breaker failed to trip for some reason, there is another 50A breaker on thedock that would have.

Where the short occurred was immediately after the transferswitch that selects between shore power and generator, and I later discoveredthat the switch itself would no longer turn.
Did the switch fail internally and cause the problem, or did a badwiring connection cause the heat buildup and melt something inside the switch?  I’m betting on the latter, since I discoveredsome corrosion in the connection.

The switch itself is a Kraus & Naimer C42 A212 and notthe kind of thing you can walk into a local store and pick up.  But I felt fortunate that the first call Imade to a marine electronics shop yielded the part in inventory.  It was in my hand two days and $275 later.

Replacing the switch and burned wire was unremarkable exceptfor the mechanical challenges of crimping 8 AWG.  Most crimpers only go down to 10 AWG.  I bought an uninsulated barrel and a crimperthat could handle 8, 6, 4, and 2 AWG.
After crimping, I covered the splice with heat shrink tubing.   I did not put any type of dielectric grease onthe connection,  but I’m wondering if Ishould have given the corrosion.

In the current setup, the boat’s 220V ammeter only measuresthe black conductor the circuit.  I wonderif it would be advantageous to install a second ammeter for the red conductor.