I've spent an inordinate amount of time recently thinking about my dinghy situation.  A dinghy is a smaller boat that can be used for going ashore or other short trips where the mother ship is not practical.  If the boat is the house, then the dinghy is the family car.

The dinghy is important to us for a few reasons.  Firstly, our anticipated usage of Take Two does not include marinas.  So the situations when cruising where we would need to use the dinghy to get ashore are expected to vastly outweigh the times when we can simply step down to a dock.  Secondly, we have small explorers very interested in getting off the boat.  A thousand other practical uses come to mind.

The boat came with a Walker Bay 10 RID with a sailing kit and a 4hp Yamaha 2-stroke.  A nice little boat, but it doesn't satisfy all our needs.  For one, it can't realistically carry the whole family at the same time.  On the plus side, it does have bottom paint and we don't currently have davits so it can be in the water and available for immediate use.  If we want to go somewhere and take it along, then we just tow it behind. 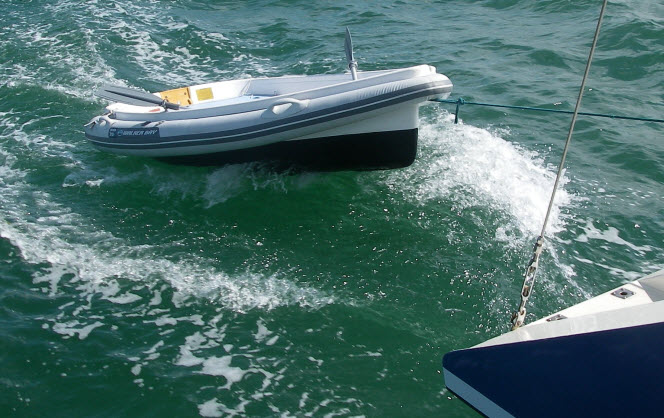 I was thinking we needed something bigger and faster, but storagebecomes an issue.  We wouldn't want to tow a dinghy long distance.  Wewill eventually get davits, but even so, we "only" have 14 feet betweenthe transoms to haul it out which would limit us to about a 12-footplus motor.  I wasn't feeling that 12 feet would be enough, especiallyfor an inflatable where so much interior volume is taken up by thetubes.

I've been intrigued by the Porta-Bote since seeing one at a boat showseveral years ago.  They're indestructible, have lots of room, and foldup to 4" flat.  When I saw a 14-footer on Craigslist I jumped on it. They look a little goofy, but it is growing on me.  One of my dockmatessaid it looked like a stealth bomber.  Take Two is very angular andaggressive-looking (to me) and I think the Porta-Bote is a goodaesthetic fit.  And it gets me the same type of "Holy crap, you'recrazy!" looks as Take Two does (which I've come to enjoy).

It doesn't have bottom paint, so it can't be kept in the waterlong-term.  Our marina is pretty bad for growth and it started to getbarnacles after only two weeks.  The current storage solution is tokeep it folded and lashed to the port side lifelines.  The unfoldingprocess is a little arduous (I understand that they loosen up overtime), but we have plenty of foredeck space for doing that.  I'mthinking I can launch and retrieve over the port bow with a smallroller and the clever use of a halyard.  It only weighs 100 pounds soit is pretty easy to move around.

It did not come with a motor, and figuring out what to get is mycurrent dilemma.  It is rated to carry a 83 pound or 9.8hp motor.  Iborrowed Jonathan's 15hp Yamaha 2-stroke (79 pounds).  I determinedthat 15hp was overkill since I couldn't open it all the way before theboat got squirrelly, but having extra power isn't a bad thing,especially since I could see pulling kids on water toys.  I didn'treally care for the weight though, and the mounting bracket was alittle too wide to fit between the transom supports.

My little 4hp is in the shop since it hasn't run in several years.  I'msure it will push the Porta-Bote, but I'm not sure how well.  Is 4hp enough to get it up on a plane?  Probably not.  I don't have any plansto get rid of the Walker Bay or the 4hp, so I think it will make a nice backup motor.  Between the two I should be able to keep one running. How about 8-10hp?  Super Dave has a Yamaha 8 and I'll ask him to borrow it this weekend.

Power is only one part of the equation.   Weight and serviceability are my next biggest concerns.  Weight is bad in general since Take Two is very sensitive to it, but a 20 pound heavier motor isn't likely to make much of a difference to 12-ton catamaran.  But that 20 pounds could make a big difference to the dinghy and to me as I put it on and take it off.  A 8hp 2-stroke is generally about 60 pounds while a 10 is 80. 10s and 15 is usually use the same block and weigh the same, so why would I take a 10 over a 15?  I'm only aware of one manufacturer that made a 60 pound 10 horse (Nissan) and they don't anymore.  So unless I can find a 60 pound 10 horse, the decision is effectively between an 8 anda 15.  I'd like to stay with Yamaha since that is what I already have and would like to reuse spares if possible.

The motor(s) will probably live (eventually) on a bracket on the back of the cockpit and I'll probably rig a block and tackle from the boom to raise and lower it to the dinghy.  The weight wouldn't be a big deal if I did it that way.   But anything related to the back of the boat will get tied up in the hardtop decisions, so that isn't likely to happen soon.  In the meantime, the motor will probably lay on the sidedeck and and get carried down the transom steps to the dinghy.

You'll notice that I'm only considering 2-strokes.   In fact, they're being phased out for the more environmentally-friendly 4-stroke.  Iwon't go into the technical differences, but for my purposes the differences are: 4-strokes are quieter, use less fuel, and have cleaner emissions; they have oil in the crankcase instead of mixing it into the fuel which is simpler, but means they must remain upright or the oil will spill; and they are heavier.  But what is most important to me isthat 4-strokes are more complicated to service.  A perfect analogy is how cars went from carburetors to electronic fuel injection and now nobody can work on their own cars anymore.  I want to be able to fixthe motor myself and if I can't, find a mechanic who can.  I think I'll have much better chances of that happening in Pogo-Pingi, South Pacific with a 2-stroke.