Every journey starts somewhere. Our hailing port is Clearwater, but our journey really started in Bradenton, at the end of "G" Dock at Twin Dolphin Marina, where we were lovingly referred to as “the Robinsons” (as in Swiss Family).

A rebellious and fun-loving lot to whom the normal rules do not apply, our friends there on "G" named the dock-end “H” and proceeded to put up a tent for shade (with twinkly lights for holidays), fans, grills, football games on TVs, Corn Hole, water balloon launchers, robotic dinosaurs, wading pools for dogs, fishing poles, and tables replete with everything from Low Country Boil to Sunday morning Bloody Mary makings. There is only one way to describe the mayhem that happened there every weekend: fun.

At a time when Jay and I had tired of the suburbs and were ready to try something new, we bought a boat, found a place to dock it and were immediately introduced to the ringleader, Pete, and fun commenced. We were in dire need of lightening up and it was impossible to be serious around the Moe-Larry-and-Curly types we found hanging around on any given Saturday on H Dock.

More importantly, our children, who might have been summarily rejected, shushed, or looked down upon on any other dock in any other marina, were welcomed, if not with open arms, then with a got-yer-nose and a high five. Our kids consider these thoughtful and fun-loving adults as, well, peers, and friends to boot. And the dogs! Our kids were in heaven: fishing with Jack, taking Rosie for a walk, petting Bella, getting kissed by Savannah, or being herded by Patches. 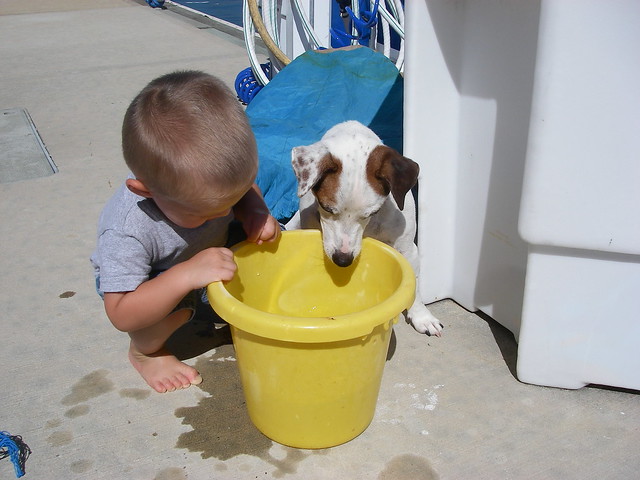 This is a special group of people—Pete and Joe, Mike and Jean, Rob and Nancy, Don and Susan, Dave and Julie, Doug and Judy, Dick and Jane, Wayne and Terry, Mike and Marilyn (and others who come and go)—people who make dramatic and daring rescues in the Manatee River, who are always available to grab a line or, at the very least, offer “helpful” suggestions while you are docking, sailors and power boaters alike who are able to set aside differences in the name of Margaritas and SPAM bake-offs.

When we walked down the dock that first evening when Jay delivered the boat, I was sure we got the sidelong glances that said, “Oh, no—here come the kids that will ruin the party!” And when we saw the weekend crew, we were thinking, “Oh, no—here come the adults that will ruin our kids!”  Instead, our kids proved themselves able to interact with the grown-ups without being too obnoxious (and we could always send them back into the boat if they were), and the grown-ups proved that they could keep their mouths (and conduct) relatively clean until 8:30 p.m. After that, of course, all bets were off, but then Jay and I would often come out and join in.

Lest one think we received all the benefits of the H Dock fun, I’m sure we provided plenty of free entertainment—Sam grew up before our eyes during the two years at Twin Dolphin, and his antics (including going for frequent dips in the drink) kept us all on our toes. Our kids’ climbing and swinging were like a weekend circus act, their treasures from the sea were frequently on display, and Jay’s constant tinkering with boat projects provided subject matter for plenty of conversations and a few jokes.

As for me, I will never forget my 34th birthday. My friend Heather was down from Maine, and we had gone outside on the dock to hang out while I filled the water tanks. An hour later, I heard a trickle of water, telling me that the tanks were overflowing. Of course, that was back when an overflowed tank resulted in floating floorboards inside the boat. The H Dock rescue team sprang into action, able men with pumps in hand to help me clean up at midnight! I have never laughed so hard at my own negligence.

There are so many good memories of our two years there that it makes it really hard for me to say goodbye. But it’s time to clean out our dock box, get out there and do the things we’ve been planning all along, and make new friends.  But no matter where we go in the world, no harbor, no dock, no yacht club, will ever compare to the friends we made at HDYC. We will proudly fly the H Dock Yacht Club burgee, and remain members even if we don’t make it to the meetings any more. 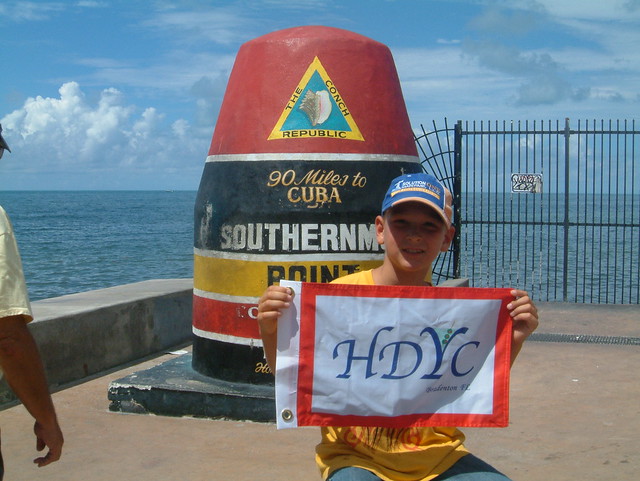 To all our friends at Twin Dolphin—we miss you very much and will come by for a visit whenever we’re in town!