There are plenty of things to fear in the water, but fortunately I’ve never seen them. The closest I’ve come is a large tiger shark I saw from the deck of my father’s boat when I was younger. My memory could be flawed, but I remember it being about 10 feet. It was certainly a big one. That was on the Gulf side in the Florida Keys, which is relatively shallow water, so it was strange to see such a big shark there. It just goes to show that sharks are everywhere.

Different species have different dispositions. Understanding those can help you interpret the creature’s behavior and determine if it has dangerous intentions. Bull sharks are just mean and will attack for no reason. Tiger sharks are perpetually hungry and not so choosy about what they eat. Great Whites have a bad reputation because of the Jaws movie, but probably only bite humans in cases of mistaken identity. That pretty much covers the man-eaters. We would clear the water immediately if we saw any of those.

Other sharks we take on a case-by-case basis. Nurse sharks are generally harmless if you leave them alone. Most sharks I’ve seen in the water are small and afraid of me. I’m sure the bigger ones are out there, but have no interest in us and stay clear. If we happen to spear a fish, however, that definitely interests them and we’ll move to a new spot.

I teach my kids that barracuda are harmless. They are so common that it would be silly to fear them; you’d never go in the water. I tell the kids barracuda are dumb, don’t see very well, and are just curious about what you’re doing. They seem to just hang in the water a short distance away and watch. They look aggressive, like a torpedo with teeth, but I had not heard of any barracuda attacking people the way sharks sometimes do. Conventional wisdom to avoid trouble with barracuda is to not wear jewelry or anything shiny or sparkly.

So it was a little disconcerting when a 4-foot cuda charged me yesterday. I didn’t see it, but our friend Ken did. I was at the back of the boat handing up my gear and about to get out, when I heard Ken call for everybody to get out. I assumed that he had seen a shark, was being cautious, and that there was no immediate danger. Since we had kids in the water, my first thought was to round them up and bring them in first. But then Ken reiterated more urgently that I should get out immediately. That was all I needed and hopped straight out.

When we had everyone back aboard, he explained that he had seen a large barracuda charge at my fins and it only veered away within inches of striking. Neither of us had seen that kind of behavior before and that’s what led him to get everyone out. Upon examining my fins to see what could be so interesting, I realized that the logo painted on them is somewhat iridescent and shiny. It seems I unknowingly broke Rule #1 for barracuda. Needless to say, I scratched that paint right off. 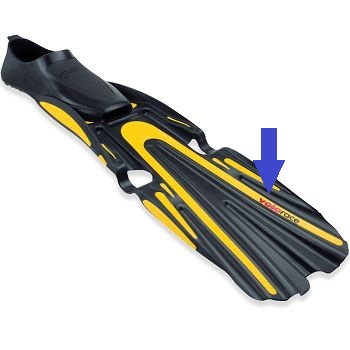