The summer project schedule is in full swing.  We’re in the process of commissioning the big ones requiring wood and fabric work beyond our time and skill, and there are also a bunch of little ones that we are equally excited about.

One of the little ones that we are unduly excited about is the new galley faucet I put in yesterday.  It may seem mundane, but it is a huge improvement and we can’t believe we didn’t do it before.

The old one was a standard household “pull-out spray” faucet.  We had several complaints about it, all of which center on water and energy conservation.  First, the faucet was a “single lever” type.  It probably doesn’t bear explanation, but the lever is raised and lowered to control flow, and articulated left and right to control temperature.  It was a challenge for us to keep the lever pointed all the way over to the cold side to avoid unnecessarily mixing in our hot water.  It was also natural to simply flip the lever up to full height to turn on the water, especially for the kids, who often wash their hands in the kitchen sink.  You really had to consciously think about using less water, and as a result the faucet was often on full flow unnecessarily.

The primary purpose of the galley sink is washing dishes and this is where most of the water goes.  No matter how careful she was, Tanya was constantly using too much water or hot water.  The reason is because it was a three-handed job:  one to hold the article being washed, one to hold the spray handle, and one to turn the water on and off.  The result is that the water wasn’t turned off as often or as quickly as it should have been, and then it was turned back on with too much force or the wrong temperature.

In a house these problems probably wouldn’t be noticeable, but every gallon counts on a boat, even one as lavish with power and water as ours.  So we started looking for a new faucet with three basic requirements: separate hot & cold valves, a way to regulate the flow unrelated to turning it on or off, and a pause button on the handle.

You can go to Lowe’s or Home Depot and see a whole wall of faucets.  Our old one is there.  If you remove the cosmetic factors, there are very few differences between them.  That alone says something about all of us as consumers.  Of the features that we had determined were essential to water and energy conservation on our boat, the only one offered by this wall of faucets displayed to millions and millions of homeowners was the separate hot & cold valves.  And most probably view that as a cosmetic choice.  I think that says something else.

We did find a new faucet that satisfied our requirements.  It was in our bathroom.  It is made by ShurFlo, a company that markets products for marine and RV use.  They make many faucets, but only one that has the crucial pause button.  They call it a “trickle valve”, but it can be used to effectively stop the flow (not entirely, hence the “trickle” name) with one hand while using the spray handle.  It can also be partially engaged to restrict the flow, and the setting persists between uses.  Perfect for kids and hand washing.  We bought this great faucet (model #135-0204-CW) by accident.  It happens to be their least stupid-looking. 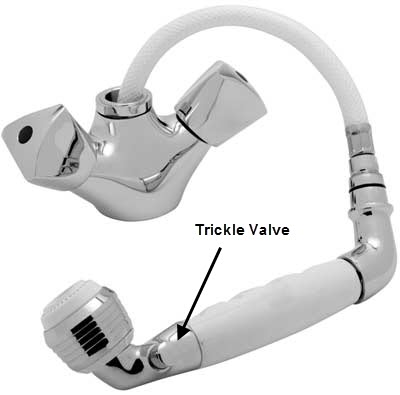 One quirky thing about it is that the knobs aren't quite intuitive.  In our opinion the knobs turn the wrong direction or the hot is on the wrong side, depending on what direction the faucet body faces.  So we face the faucet the way we want the knobs to turn and swap the little red and blue markers to put hot on the side we want.

We’re expecting this new faucet to yield big benefits on our next cruise.  Less water use means less time running the water maker (and less noise), means more net power from the solar panels, means less generator run-time (and less noise), means more time between trips to the fuel dock.  Conserving the hot water is important if we’ll be reducing generator run-time since that is how we heat it.