Having the right tools in the galley is essential to making great meals on a boat. I have written elsewhere about how much I love my Vitamix blender/grinder and my Foodsaver vacuum-sealer, but the newest addition, a Kuhn-Rikon Duromatic pressure cooker, may end up being my favorite. 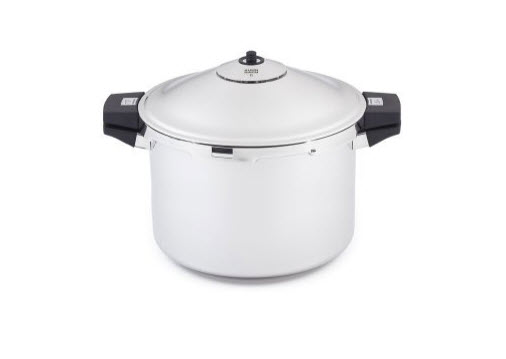 The Swiss engineers at Kuhn-Rikon are obviously very proud of their product, congratulating the purchaser for buying “the Mercedes-Benz of pressure cookers.” Of course, that implies that it was expensive, but it was also the only pressure cooker that met my requirements: it is a 12-quart, stainless steel, 2-pressure-setting beast of a pot. It has won a prominent spot in the corner of the galley, more because I have nowhere else to put something so large than because I am particularly proud of it. Also, unless an appliance is easy to come by, it will get neglected due to the “out-of-sight-out-of-mind” syndrome.

I was always a slow-cooker kind of girl, but the crock-pot and the boat’s electric system used to have the occasional disagreement that led to ruining dinner. I knew many boaters had pressure cookers instead of crock pots, and now I know why. So far, I am very pleased with it. I am incredulous how quickly it cooks things that used to take forever—a chicken, for example—which takes almost two hours in the oven, took only 20 minutes to pressure-cook! And with the carcass, I made a bone broth in about an hour, something that I used to simmer overnight when we lived in a house and didn’t worry about conserving fuel. I have also made a pot roast, a rice pudding, Boston “baked” beans, a 20-minute meatloaf, butternut squash, potatoes, and a few soups. Though I have not (yet) noticed fuel savings, I have noticed that the galley doesn’t get as hot as when I use the oven, especially if I take the pot to the cockpit to de-pressurize.

Other uses for the pressure cooker about which I am excited are canning and sterilizing. I have up until now only done boiling-water canning with jams and other acidic items. Pressure canning allows me to can soups, meats, and vegetables. Not that I am planning a big canning spree, but you never know. When we did our emergency medical training, we learned that surgical instruments can be easily sterilized using pressurized steam. Hopefully I won’t need to do that, but now I can.

I am not only looking forward to modifying my favorite recipes for the pressure cooker, but also trying some new things, like pork shoulder for BBQ, black beans and rice, corned beef and cabbage, and the world’s-best creamy coconut flan for which my friend Chachi gave me a flan pan and recipe at Christmas (thank you)! While I wish I had known about the pressure cooker before now, I’m not sure I would have used it when I lived in the house. An oven with a timer and a slow-cooker may have made the pressure-cooker overkill. And, unless someone is cooking for a crowd, a cooker as large as mine is unnecessary. Lots of fellow boaters swear by these pots, and it has certainly earned a place in our galley. Initially we were resistant to buying one, but now that we have it we can’t figure out what we would do without it.