It was over three years ago that we last hauled Take Two out of the water for maintenance.  At that time, our bottom paint was relatively fresh and we had other priorities.  This time, our paint was four and half years old and our primary motivation for pulling out.

Hauling out is never easy for us.  I only know of five yards in all of Florida that can handle our 26’ beam.  They’re in Bradenton, St James City, Key Largo, Ft Lauderdale, and Ft Pierce.  So that’s why we’re in Ft Pierce.

Hauling out is further complicated because the boat is our home.  Last time we still had a house.  This time we’d need alternate housing for up to two weeks while the boat was getting worked on, which meant a total disruption of our lives.

It took us two months to make it all happen, but finally Take Two got to take a ride on the TraveLift. 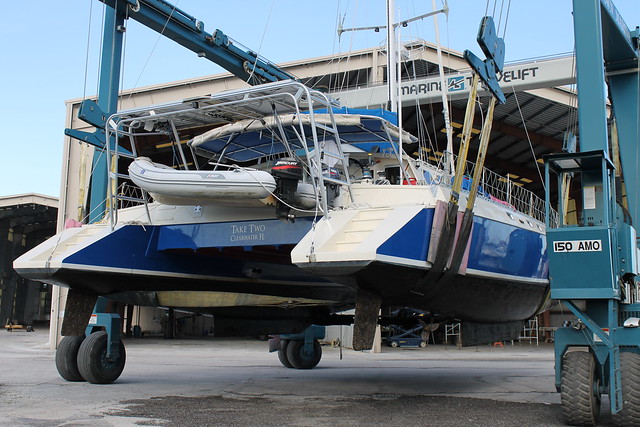 We’re expecting her to be out for two weeks while we work through our project list:

There will probably be a few other things that pop up along the way, but hopefully no big surprises.

In the meantime, Tanya has taken the kids on a little road trip to see friends and family.  I stayed behind to supervise the work and have rented a place nearby.  We figured the best thing for Spideycat was to stay aboard.  Since the boat’s air conditioners can’t run without cooling water, I bought a little window unit and ducted it down a hatch to keep her cool.