Weathering storms is not only something our family has gotten used to, it is something that actually excites us. I admit that sometimes this excitement is not a pleasant sensation, but whether at anchor or tied to a dock, a storm never fails to add a bit of the unexpected to our daily lives. Jay called me a “storm junkie” last night when I suggested we walk in the wind instead of do dinner dishes, but I would argue that he is the not-so-secret admirer of wild weather. I remember a year just after we moved back to Florida, during one of the many hurricanes that season, Jay took our two boys (2 and 3 at the time) outside to “play” in the wind and rain. I am sure I objected (“a tree could fall on all of you”), but he initiated them anyway, and every storm that has approached since then, I’ve noticed that gleam in their eyes—a mixture of nervous excitement and pleasure. 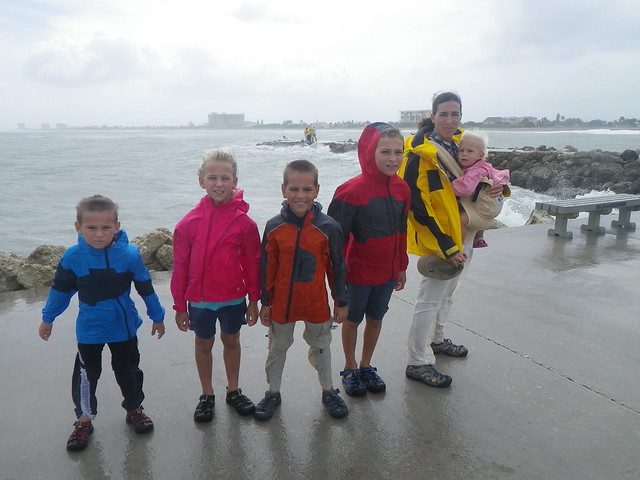 We took all five of our little adventurers out to the jetty today to observe the effects of 48 hours of steady breeze from Hurricane Sandy, sometimes gusting in the 50-knot range. The waves were crashing up over the sidewalk that skirts the rocks and the wind was so full of salt spray that we could actually taste it. There were the ubiquitous storm surfers out there fearlessly enjoying kite boards and windsurfers, but everybody else looked a little anxious. I had Rachel in the carrier, and though she kept asking to get down and walk, I said no—I was actually afraid she would blow away! Even the big kids couldn’t walk straight. 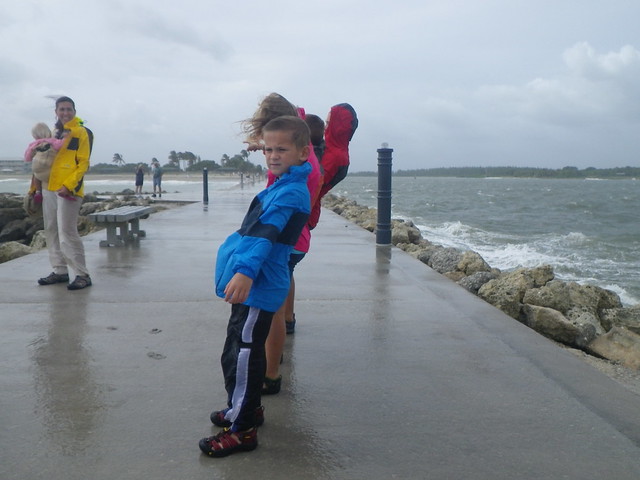 There were a group of manatees hiding out in a protected corner created by a right angle in the south jetty, and it looked like they would be stuck there for awhile. It made me wonder—did they go there looking for shelter, or did they get trapped there by the surge? Do manatees have enough warning to escape heavy weather? I would have expected to see them in intracoastal waters, maybe up Taylor Creek where we see them all the time, or in the mangroves, but sometimes storms catch one unprepared.

We’ve seen several incidents over the years of humans on boats being caught in that state, whether from lack of know-how or good sense I can’t say. Someone had their jib shredded last night in the early stages of the storm and it was only because of the kindness of strangers that they didn’t lose their whole rig. Another acquaintance who was out of town for the storm will have to deal with the sad fate of his vessel when he returns—she dragged anchor and is currently lying on her side in the muck on the other side of the channel.

We do the best we can to prepare Take Two for storms, and to brief the crew so that they will be mentally prepared, but we are not arrogant enough to believe we are immune to the damage caused by the tantrums Mother Nature throws each year in Florida. We have scoped out a couple of hidey-holes nearby where we could tie the boat up in the mangroves if we felt that the storm would be too strong to weather in a marina. But even with all the planning, sometimes by the time you decide the weather is bad enough to take drastic measures, it’s too late. You do the best you can to get ready, and then all that’s left to do is go outside and bow before the sheer power of wind and water. One lesson storms have taught us over the years, and which our children will no doubt remember for the rest of their lives: don’t mess with Mama Nature.