We had a chance this week to do an outing we’ve always wanted to do with the kids: explore Everglades National Park. Yeah, right. Have you ever seen a map of the place? We explored maybe 1% of the park. It’s so big that you have to drive from one area of interest to another. Even with the driving, we only spent time on four trails along 20 miles of the 40-mile main road that runs between Homestead and Flamingo. And that was enough for one day, giving us a great overview of what the park has to offer in the way of natural beauty and wildlife.

We started at the Ernest Coe Visitor’s Center, then drove through Cypress swamp and breathtaking amounts of grassy wilderness. We hiked on a boardwalk through a Mahogany hammock (an island of hardwood trees in the grass), then on to the scenic Pay-hay-okee overlook where you could see why the natives who lived there called it the “River of Grass,” over to the Pinelands Trail through forests of Slash Pine and Palmetto, and finally, through the Royal Palm wetlands area. On the Anhinga Trail, we were not surprised to see…Anhingas (a large bird resembling a cormorant with black-and-white wings). It was, apparently, mating season, and there were a few nests of not-so-cute-and-little baby Anhingas. We thought we might also see a few gators, but we didn’t. We saw a lot of gators, a slough-ful of gators—more than I ever wanted to see, and a lot closer, too. 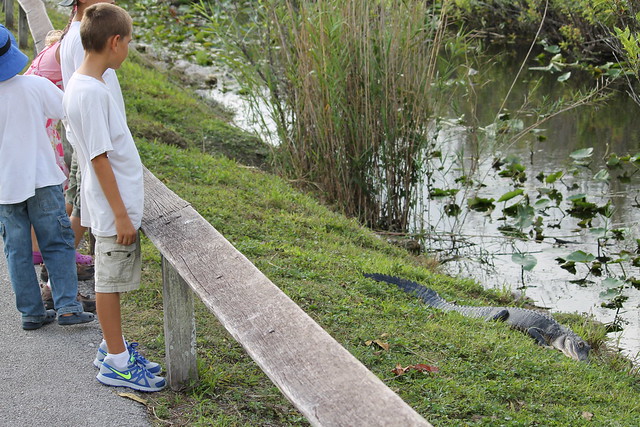 I had opted to put Rachel on my back in the Ergo early on, not because of alligators, but because it was the last hike of the day and her legs are astonishingly short. But after seeing a few big, leathery hides lounging in the grass near the path, I was glad that I had. In fact, I went up to a park ranger to ask what, if anything, kept one of those bad boys from taking a bite out of my toddler. His answer was unsettling: because she was on my back. He admitted that they were all pretty fat and happy due to a plentitude of fish, but that we must always exercise caution around wild animals. As I was talking to the ranger, a large black fellow decided to cross the road, made it half-way and stopped on the warm pavement. Jay asked a follow-up question, “Do they often lie in the path like that?” The ranger said “no” and went to get a closer look at the situation, and maybe nudge the gator on. We went the other direction and had a good chuckle.

Then we saw the mud hole. Full of gators. I’ve never seen so many large, wild reptiles in one place. Even at the zoo in Tampa, where they have plenty of alligators, there’s at least a fence between you and them. But here were a lot of gators in one place, piles of gators, in their natural environment, only a few steps away. Even for hardened Floridians who have seen a gator in every neighborhood pond, this was thrilling. Rachel’s comment, from my back, summed up my thoughts perfectly: “Teeth.” 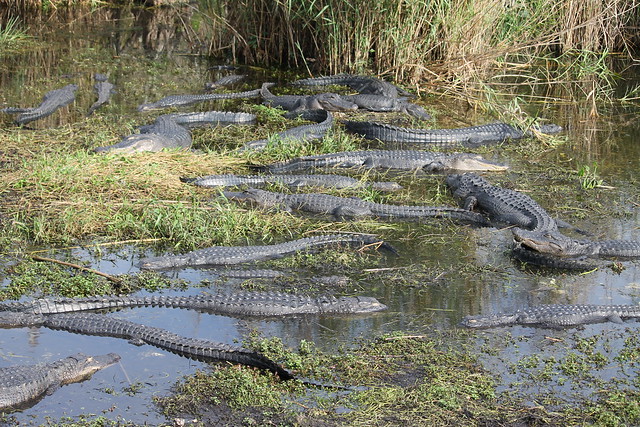 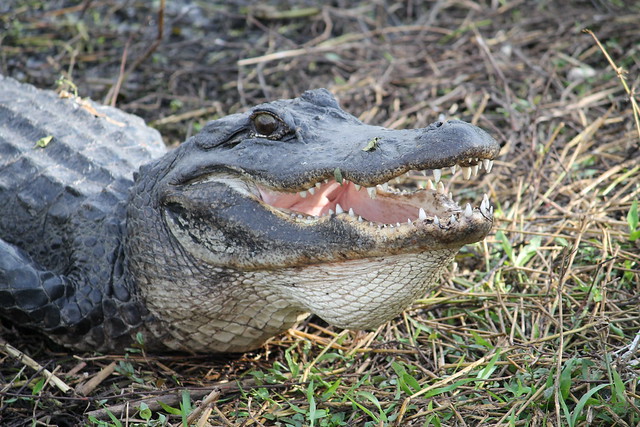