Take Two usually has a habitat of little fish living beneath her.  They like the shade and the edible tidbits that rain down at meal times.  We call them the cleanup crew.

In Marathon, they’re little snappers.  In Bradenton and Ft Pierce they’re catfish.  In the Bahamas… nada.  No fish.  It’s been kind of sad and lonely not to have any little friends down there cleaning up after us.

So it was remarkable in Royal Island a few weeks ago when Tanya scraped a plate overboard and little fish came out from under us and snapped up the goodies.  Remarkable because he was an odd little black and white shark-looking fish, and because, hey, it was a fish!  We commented that he kind of looked like a remora, and then we thought nothing else about him.  The next day we sailed to the Abacos.

Fast forward almost a month and a couple hundred miles.  This afternoon as I scraped a plate at Green Turtle Cay, guess who popped out?  If it isn’t the same fish, it’s one EXACTLY like him.  It is definitely a remora.  I don’t have a great picture of him yet, but we can clearly see the sucker on the top of his head. 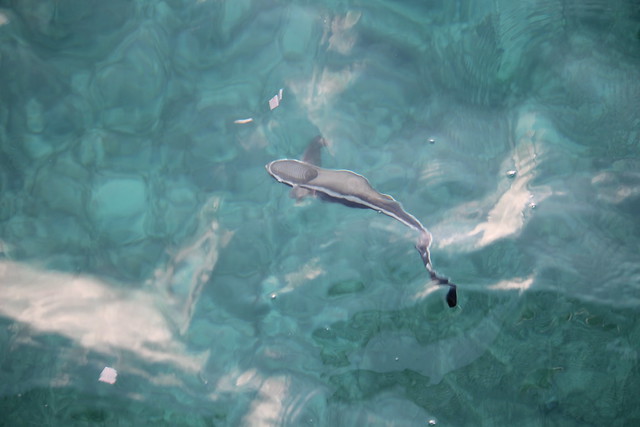 So what are the odds that it’s the same fish?  Well, when was the last time you saw a remora in real life?  Doesn’t exactly happen every day, does it?  And isn’t it a remora’s purpose in life to stick himself to a bigger fish and live off its scraps?  Where is his big fish?  I think it’s us.

So we have a little buddy.  This is so much better than the usual ragtag band of loafers we attract.  I wish we could keep him forever like a pet.  Unfortunately, we’re headed for a dock in Florida and I don’t think he’s going to like the locals very much.  But for now he’s got a pretty good thing going.