It begins.  Take Two is now safely out of the water and in the boat yard.  Tanya and the kids are now safely in Atlanta. 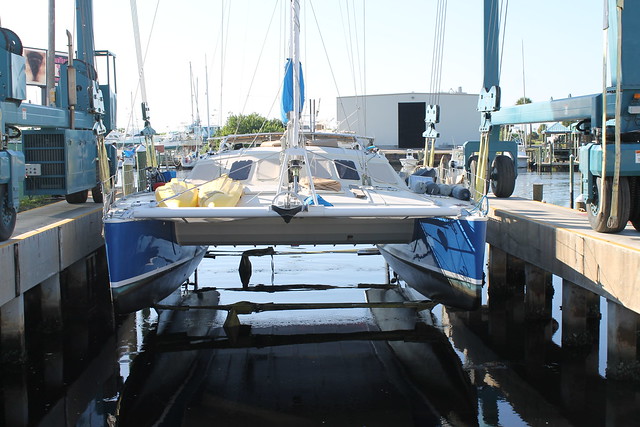 I hauled the boat on Friday to gain an extra weekend in the yard, which I’ll use to get a few steps ahead of Ben & Paul, the guys who will be doing most of the work.  My first task was heat management.  Since we’re going to be working inside the boat, it would be ideal if it weren’t as hot as an oven.  To that end I put up awnings, covered windows, and installed two portable air conditioners on deck and ducted them down a hatch.  The boat’s built-in air conditioners only work when the boat is in the water.
I moved all our personal items away from the engine spaces and generally got the boat in work mode.  I brought aboard all the supplies I’d been accumulating in the back of the man van and used them to redecorate the salon.  The place is decidedly more nautical now.
I disconnected the prop shaft couplings.  I’ve had lots of practice at this maneuver and thought it would be better if I took care of that.  My goal for the weekend is to have the engines completely disconnected and ready to lift on deck by Monday.  The new engines and generator should arrive on Monday.  When the new stuff is on the ground and the old stuff is on deck, a crane will come to swap them, hopefully on Tuesday.
To get the engines from their beds to the deck and back, we’ll use the a-frame and chain hoist again.  There are patches on our decks over the engines for the purpose of lifting the engines in and out.  Unfortunately the patches were put down with copious amounts of 3M 5200 and initial attempts to remove them failed.  I hope to have that remedied by Monday, but I think we’re going to have to add “new deck patches” to the project list.  Use 4200, people!