I’ve been struggling to learn guitar for a long time.
I had the regular boyhood daydreams of electric guitars, leather pants, and bleached blonde women.  Then later in life I imagined myself swinging in a hammock, sipping an umbrella drink, and strumming Jimmy Buffet songs.  The only difference between these two unrealities being that the second time around I had a wife who thought I was in desperate need of a hobby.  Tanya bought me a very nice acoustic guitar for a birthday gift, and it has been a source of mutual frustration ever since.
Aaron was bit by the guitar bug early.  We raise our kids on the classics, and Aaron has developed a real appreciation for classic rock.  He wanted to play guitar, electric of course, before he knew anything about bleached pants and leather women.  Stubborn purists that we are, we bought him an acoustic instead and signed him up for lessons, promising that if he stuck to his lessons, the electric would come.  You can probably guess what happened.  The lessons were boring and tedious, interest waned, and then we had two acoustic guitars and three intensely frustrated people.
Years pass and I bump into a colleague in the Atlanta airport.  He has an electric guitar on his back and a discussion ensues.  He always wanted to play guitar, and now his kid wants to play guitar, but it’s so hard.  Have I heard of Rocksmith?  No?  Rocksmith is fundamentally a game, but with a real guitar and the intention that you actually learn to play.  It works because it’s fun.
I was intrigued and so picked up a copy of Rocksmith and a red Stratocaster.  Oh man, is that ever fun.  And the kids are into it.  For the last three days, that red Strat has hardly had a break.  Such a workout, in fact, that we’ve already worn out a set of strings.
I’ve realized that electric is better than acoustic for learning.  It’s smaller and less prone to damage.  The strings don’t have to be pressed as hard, so it’s not as painful.  It’s quieter when unamplified, and even amplified can be plugged into headphones.  And it’s more fun.  Rocksmith can work with an acoustic, but really, why would you want to?
Why are we talking about learning guitar?  Isn’t this a sailing blog?  Not really, but I’ll give you a sailing analogy anyway:
Only time will tell how well the whole thing works out, but it’s looking good so far.  Rock on. 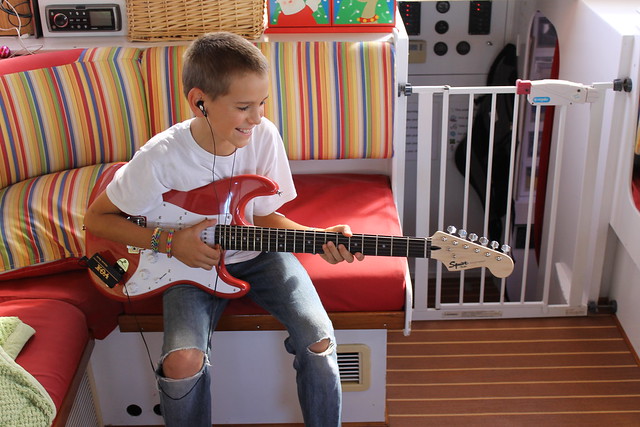