Leaving a place can be hard, like tearing out roots.  But the bonds most difficult to break are often the ones that make a place worth visiting.
We left Ft Pierce on January 19th.  We’d been prepared to leave since the day after Christmas, but with all the mooring balls in Marathon full, the timing never seemed right.  I had business travel on the calendar, and there was the ski trip at the end of February to consider.  We needed a secure place to put the boat, and bouncing around in the Keys was not appealing.
Then while making Sunday breakfast a few weeks later, we suddenly realized it was time to go.   We had the right wind, the right waves, and the right moon.  We had a couple free weeks on the calendar.  Surely that would be enough time to get a ball in Marathon, right?  If all else failed, we could park the boat at a dock behind a friend’s house down there.  We left that afternoon.
The trip down was uneventful and our slowest to date.  We didn’t really have anywhere to be, so we took it easy.  We spent one night underway and made overnight stops in Biscayne Bay, at Rodriguez Key, and at Indian Key.
Our last day was our only sailing day.  Reaching in 15-20, we were making about 8 knots.  A couple guys on a 30-something performance cat spent their morning trying to catch us.  Eventually they succeeded, but they paid dearly for the privilege.  The other boat was certainly faster, but what was a nice comfortable ride for us, looked cold, wet, and miserable for them. 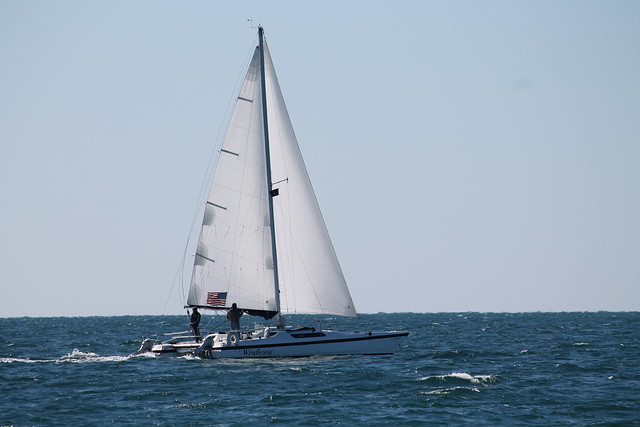 Of course, no trip in Hawk Channel is complete without snagging a crab pot.  We hooked three, but could only clear two of them, and had to put Eli in the water to get the third.
Eventually, we arrived in Marathon and proceeded to re-establish our roots there.  We got on the list at number 6 waiting for one of 15 balls.
Over the course of the next week, we carved out a space for ourselves in the Boot Key Harbor anchorage.  As boats came and went, we gradually adjusted our position until we had established a comfortable buffer zone among longer-term boats.
We continue to be amazed by the difficultly some people have anchoring their boats.  We’ve seen several that have had to make multiple attempts to get settled, only to drag during a midnight squall.  We keep a wary eye on the boats we don't think are anchored well.
Our anchor has held just fine.  In fact, one of the times we went to reposition ourselves, we were unable to retrieve it.  The windlass couldn’t break it out and when we tried to motor over it, but the load on the chain actually caused our bow to dip.  Not a good thing in a catamaran.  We weren’t just dug in, we were hooked on some of the detritus littering the bottom of the harbor.  Old moorings, sunken boats, bicycles, engine blocks; you just never know what’s down there.  I was not looking forward to diving down to clear it.  After much tugging and pulling, we finally got our anchor back, including a very large piece of old mooring chain. 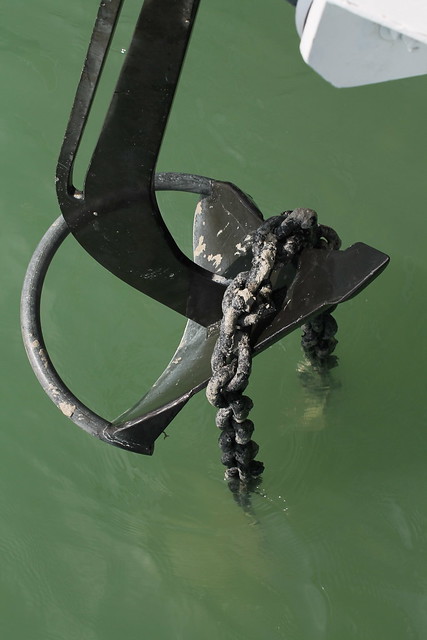 It was good to have Take Two firmly anchored, because four weeks later we still didn’t have a mooring ball assigned.