We learned a long time ago that PVC fenders and Florida sun do not mix. They get gummy and attract dirt. In addition to looking terrible, they also smear the sticky mess on the side of the boat and it is nearly impossible to get off. As with PVC dinghies, the solution is to keep them covered.

Initially, we used the fleecy kind from Taylor Made (the maker of the fenders). These worked okay to protect the fenders, but the fabric was not up to the rigors of the sun or being constantly ground against the dock. Eventually they began to look ratty and Tanya decreed they must be replaced.

I found some that seemed to be made from better material, but it was still a fuzzy “blanket” type of material. Tanya wouldn’t hear of it. They must be made of Sunbrella for durability and to complement our color scheme. I couldn’t find any made of Sunbrella, and I didn’t want to make them myself. We deliberated on this for a while with our old nasty fenders a daily reminder. Finally, Tanya declared she would make them.

Now, Tanya is not a girl with a lot of free time on her hands. She still undertakes the occasional project, but usually at the expense of something else. She once volunteered to edit a friend’s book and we didn’t eat for a week. So I was dubious about her making the covers. I thought it would be cheaper to buy them pre-made (at twice the cost) than suffer the disruption of her making them, but I dutifully ordered the material.

The fabric arrived and sat in the cockpit untouched for several days, people stepping over it to get in and out of the boat, without any mention of when this was going to get done. It was bothering me, but I knew better than to ask. I was willing to do it myself at this point, but I couldn’t offer either. Any pressure would be received as lack of appreciation for all she does for our family, and this is seriously unwise (and untrue). A hint was required.

So one evening she “caught” me measuring a fender. Of course, I had measured them before I ordered the fabric. That did the trick and the next day the fender cover factory went into full gear. She knocked out seven fender covers, each better and faster than the last. 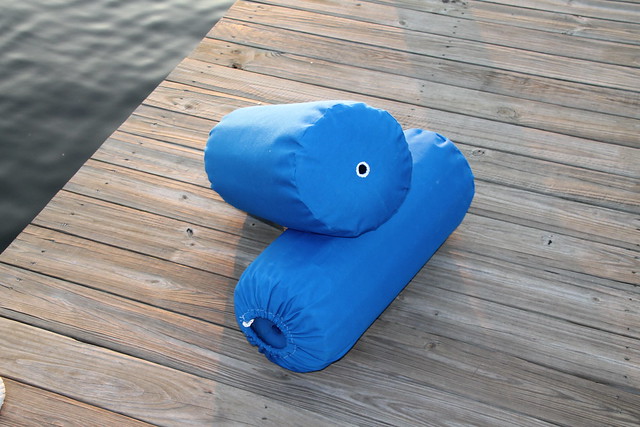 There is a certain satisfaction in doing something yourself, a kind of joy in making something. And for as hard as it is to get a project started, it’s almost as hard to stop. We call that the First Law of Projects. Tanya was still in a full-blown cover-making frenzy when we ran out of fenders. She began to eye the neighbor’s coverless fenders. People were going to be getting fender covers for Christmas. Fortunately it passed before things got out of hand.

A few days later I was down in one of our lazarettes, the one where we store the fenders, and saw… way in the back… an eighth fender.