Highborne Cay is a big H-shaped island in the northern Exumas. It is also entirely owned by the Highborne Cay Resort and Marina, meaning you can’t land there without permission. We anchored there last Monday. Dad needed the internet for work, and we wanted to explore, as we had never been ashore there. And for good reason too, as we found out when Mom dinghied over to the marina. The landing fee for non-marina patrons was $25 per person (that’s $150 for the six of us)! However, if you pay the fee, you get access to all the resort facilities (bikes, Hobie cats, beaches, kayaks, bathrooms, etc.).

Despite the cost, we all (dad excluded) decided to land. After paying the (exorbitant) landing fee at the Ship’s Store, we headed out to get some bikes. The bike rack looked like someone had gone into the bike section at Walmart, bought six or seven bikes at random, and let them sit for several months in a humid environment. In spite of appearances, they were in good working order.

I opted not to ride, and instead walked with Mom and short-legs (Rachel), while the others biked on ahead. I soon tired of walking at Rachel’s slow pace, and went exploring. Before long, I saw a side road named “The Spring”. Interested, I decided to follow it. I knew there was some fresh water in the Bahamas (otherwise, how would the Taino Indians have survived?), but I didn’t know about Highborne. The road led down the hill to the beach off of which our boat was anchored. I followed the periodically-spaced signs advertising “SPRING” into the woods. And there it was. The Spring of Highborne Cay: a three-foot-long metal spring hanging from a tree. Disappointed, but not surprised, I returned to the beach. After carving my name in BIG letters in the sand, I went to find the others.

We spent the rest of the day climbing on the rocks on the shoreline, picnicking, biking on the trails, playing basketball at the “basketball court”–a post with a board and hoop nailed to it–and eating over-priced ice cream from the Ship’s Store. Late that afternoon, we went back to the boat, feeling like we had gotten our money’s worth. 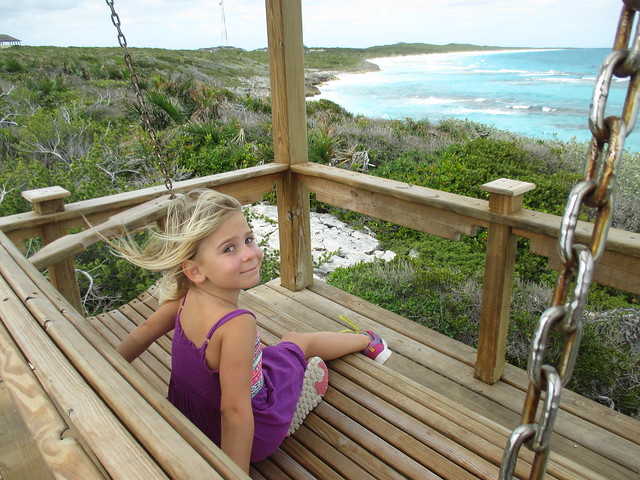 Rachel on the swing at Highborne Cay