“The lobster in this place are wondrously large and virile. The natives hath given us a number of them, and my men are most excited to learn the ways of catching them.”  So wrote Christopher Columbus in 1492, during his sojourn in the Bahamas, or so he would have written if he had known what a lobster was, and if the natives had given him any. The lobster in the Bahamas, at least in my experience, certainly are large and virile, if scarce near populated areas. Lobster season lasts until the end of March, and we plan to make the most of it.

We do not have the traditional lobster hunting implements (hand net, tickle stick), but we do have pole spears. And, fortunately, you are allowed to spear lobster in the Bahamas. This adds the complication of having to kill the lobster before measuring it (its carapace must be at least three inches), but I haven’t had too much trouble. All the lobster I’ve seen were well over the size limit. Many of you no doubt think spearing lobster is cheating. While I agree in principle, the pole spear gives us the advantage of flexibility. With a net and tickle stick, you can only hunt lobster. With a spear, you can hunt anything. At least we’re not fishing with hand grenades! 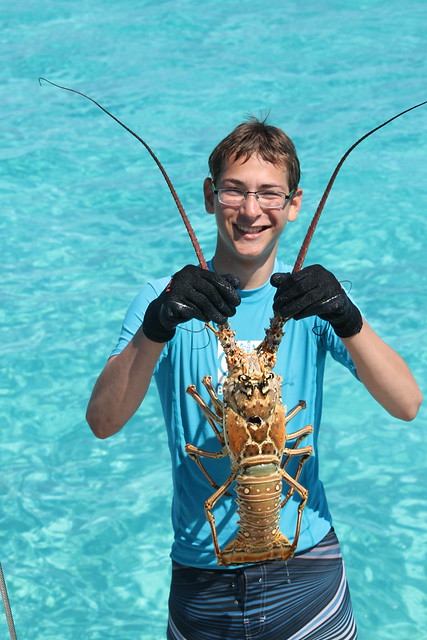 Lion fish are also excellent for spear fishing, for a number of reasons. First, they’re instantly identifiable. Second, they’re slow moving–an easy target. Third, there is no minimum length; you don’t have to worry about shooting one that’s too small. Fourth, they’re delicious. Just remove the venomous spines before eating. And fifth, there is no bag limit. Fire away!  The Lion Fish Epidemic started when people set their pet lion fish free in the Atlantic Ocean, far from their natural Pacific predators. The invasive lion fish thrived in their new environment, gobbling up baby reef fish, and multiplying like crazy. Eating them does everyone a favor. 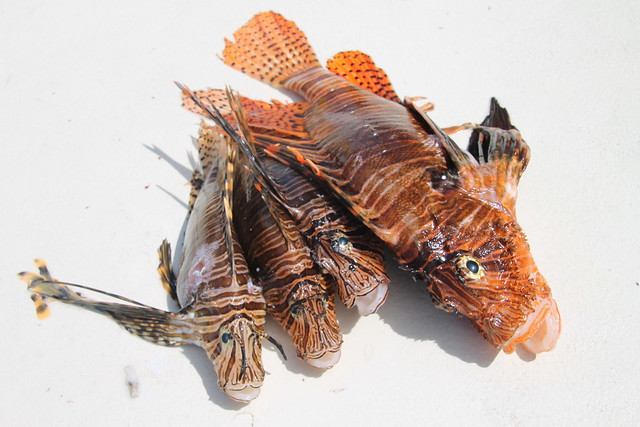 The Exumas Land and Sea Park is a large tract of islands stretching from Shroud Cay to Rocky Dundas. It contains a number of pristine beaches, coral reefs, and, except for a few movie-star-owned islands and the park headquarters, is uninhabited. You are not allowed to take anything out of the park, but this is mostly left to the discretion of the visitors. You’re also not permitted to fish, hunt, or lobster in the park, although enforcement is difficult because of the park’s large boundaries. However, it must be working, because while snorkeling at Warderick Wells, I saw at least six huge lobster hiding under coral heads. I also saw just as many lion fish, more than I’ve ever seen on one reef. This may be another result of the no fishing policy. You would think that killing lion fish, even in the park, would be a public service, right? At least people are respecting the no-take policy. The park is doing something about the lion fish. When I reported sighting a lion fish in a creek to one of the rangers, he said he would take care of it.  When we moved out of the park, I noticed a severe lack of edible sea life, evidence of fishing. I hope that visitors to the Exumas are supplementing their diet of lobster with lion fish!