On our last evening in Elizabeth Harbor, there was a music jam at the St. Francis resort on Stocking Island. The atmosphere was relaxed, the music an eclectic mix provided by cruising musicians, and the crowd encouraging. I have never let lack of talent stop me where enthusiasm can compensate, and this was no exception. After a gin-and-tonic and a kick in the seat by Kimberly from Ally Cat and Julie from High 5 (who offered to accompany me and lend moral support), I played my ukulele and sang in public. I played a parody I wrote on our last passage (Rudder Cay to George Town), using America’s I’ve Been through the Desert on a Horse with No Name. I may never be as popular as Al Yankovic, but the crowd seemed to like it and even sang along on the la-la-las. Afterward, Eli and Aaron brought the house down with their face-melting rendition of Black Sabbath’s Iron Man. They have real talent on bass and guitar, respectively, and it makes a mom proud to see them play in public for the first time. 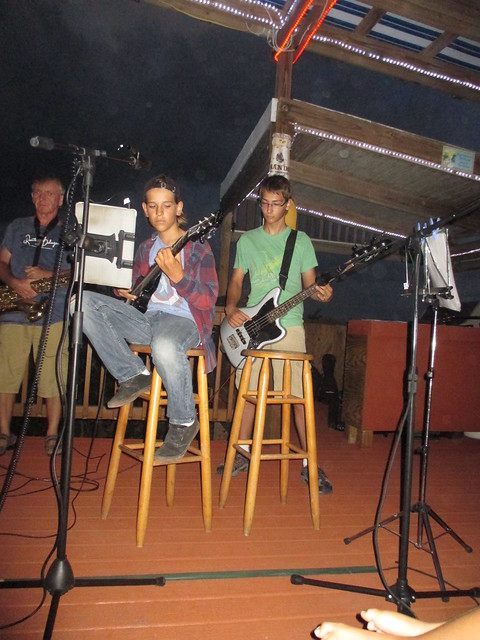 For those who would like to try it out, my parody can be played using only two ukulele chords, E minor and D6.

FIRST VERSE:
On the first part of the voyage
I was looking at all the life
There were fish and birds and waves and things
There was wind and sea and sky
The first thing I did was to say a prayer
For a journey safe and sound
The kids were hot and the water was cold
But the sails were full of wind

SECOND VERSE:
At first things went along swimmingly
We read our books, kindles, and magazines
We ate olives, crackers, and snack-y things
We played music, movies, and video games
But a few of the kids were turning green
And the clouds began to rain
It was the first day of our passage
And the crew began to complain

BRIDGE:
After two days on the ocean, we started to get bored
After three days of the motion, we just wanted to go ashore
And the thoughts of land and villages made us dream of an ice-cream store

THIRD VERSE:
After a week at sea, I let the kids run free,
‘Cause I’d started to lose my mind
I was tired of fish and birds and waves
I was tired of sea and sky
Now, the ocean is a special place
Where you learn who you really are
You’ll be tested and if you pass the test
My friend, you will go far