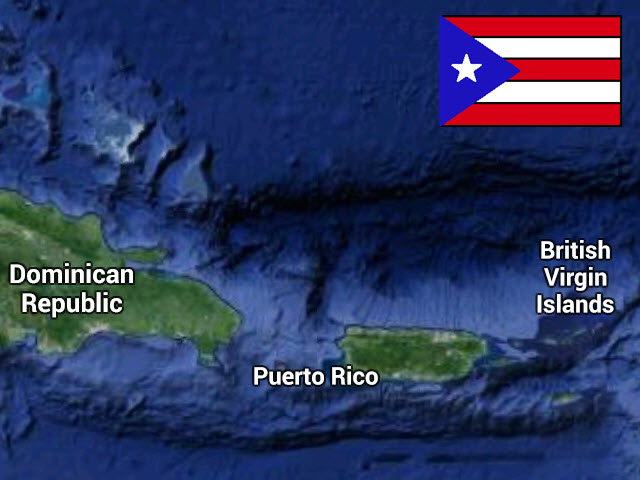 In 1493, on his second voyage to the New World, Columbus landed in Puerto Rico, where he and his conquistadors proceeded to harass and enslave the Taínos, the natives to the island, when they could not lead him to the gold that the Spaniards were looking for. In 1509, Juan Ponce De León was selected to be Puerto Rico’s first Spanish colonial governor. His bones lie in Old San Juan today.

‘Puerto Rico’ is Spanish for ‘rich port.’ This was certainly true in the 16th and 17th centuries, when Spain used the island as a re-stocking port to and from the shores of south and central America, where it plundered Aztec and Inca gold and shipped it home. Puerto Rico was a popular spot with pirates, as well, also looking for a “piece of the pie,” so to speak. Later, sugar cane plantations produced another kind of gold: liquid gold in the form of rum. With the end of slavery in 1873, the trade in sugar, slaves and rum ended.

American troops invaded Puerto Rico in July of 1898 during the Spanish-American War. In the Treaty of Paris, Puerto Rico was ceded to the U.S. To this day, it retains its commonwealth status, won by the first elected governor, Luis Munoz Marin in 1951; it is part of the United States and yet independently-governed, uniquely Caribbean with Spanish and African roots. Today, Puerto Rico’s economy is based not on agriculture, but on tourism and manufacturing. Many large American businesses, which relocated to the island to receive tax breaks, left when the tax breaks ended. Puerto Rican debt has ballooned, and the island is in the middle of a decade-long economic recession. Because it is neither a state nor an independent nation, its fate lies in the hands of decision-makers in Washington D.C.

Puerto Rico is mountainous, with the northern half of the island lush and green, and the southern half more arid with grassland. It is covered largely by tropical rain forest, and is home to 56 endangered species. The coqui is a small tree frog that makes a distinctive sound and is unique to Puerto Rico. The highest point on Puerto Rico is on Cerro de Punta, over 3,800 feet above sea level.