“Buddy-boating,” or making plans to travel together, is a common practice among sailing cruisers. On a grand scale, rallies like the Salty Dog, in which dozens of boats leave from Hampton Virginia at the same time each fall bound for the Virgin Islands, are a kind of buddy boating en masse. And on the other end of the spectrum, every year in Marathon, the white board in the boater’s lounge fills up with people looking for someone with whom to cross the Gulf Stream.

There is a myth, I think, with buddy-boating, that there is strength in numbers. While that may be true in bad neighborhoods like the Northeastern coast of Africa, I’m not sure it works on ocean passages, where circumstances that endanger one boat likely endanger another boat that tries to come to the rescue. At best, traveling together offers companionship and someone with whom to celebrate upon arrival. Once reaching the cruising grounds, however, buddy-boating takes on a whole new look. Now a few boats band together and hop islands, chatting on the radio about pot-luck dinner dates and beach days, group-snorkels, and game nights. This is common practice among kid-boats, for obvious reasons. Frequently, the desire to congregate dictates the cruising schedule, and departure decisions are as affected by who’s-going-where as by the weather.

Being free-thinkers and having a large social group of our own (self-sufficient in all things!), we have often avoided this type of groupthink, fearing that we would lose our precious independence or be caught in bad weather by herding from one island to another. At the same time, we are not anti-social, and we love to get together with other boaters, so we frequently find ourselves accidentally travelling with other boats, and surreptitiously hoping to see so-and-so at the next anchorage. I think that has changed in the Virgin Islands.

We are a bit late in the season for a Florida-to-Caribbean run, so we find ourselves more alone than usual. The large group of southward boats we met in George Town seems to have spread out considerably, some stopping in the Dominical Republic for the hurricane season to finish the transit next fall/winter. Others are far ahead of us, well on their way to Grenada, and still others behind us in Puerto Rico. What we find in the cruising grounds here are charter boats—lots of them. With a 7-10 day itinerary, they are on the move, staying one night in each lovely spot before moving on. And so we find ourselves on the slow track with but one other boat: s/v Abby Singer. 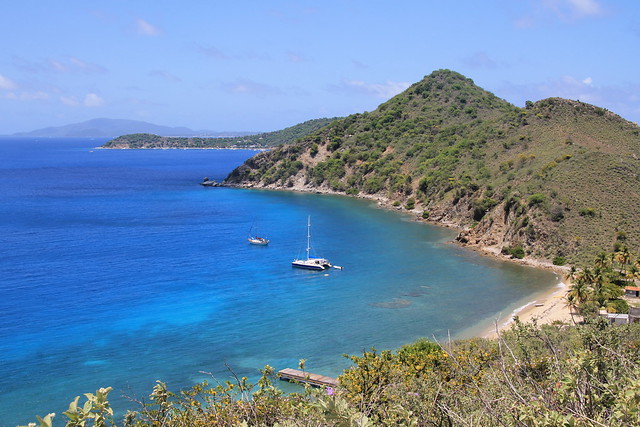 We met Andrew and Summer and their two girls in the Exuma Land and Sea Park in mid-March, and met up with them again around Easter in Black Point, and left George Town on the same day in April. We arrived in St. Thomas the same day in May and have been hanging out off and on since then. They are a delightful family, and we have enjoyed getting to know them. Paige (13) and Sky (10) fit right in with our crew, playing games, doing art projects, jumping off the high dive, and playing music. (They even have dedicated cups that sit in the lineup with the other color-coded kid-cups.) The grown-ups sit in the cockpit and talk boat projects, philosophy, drink recipes, and provisioning. We have dinners together, go snorkeling, play cards, watch movies, go to the beach, and plan excursions. In short, we who have eschewed the practice in the past, are buddy-boating. However, because both Jay and Andrew remain fiercely independent in their decision-making and weather-planning, we frequently leave anchorages on different days, parting ways and rejoining elsewhere, allowing all of us to keep our individuality but also enjoy fun times with friends. 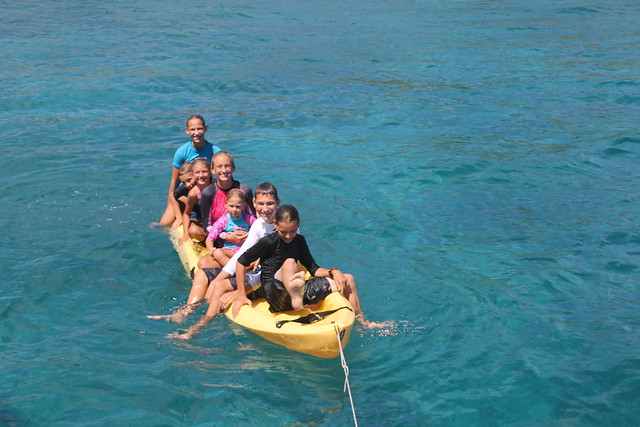